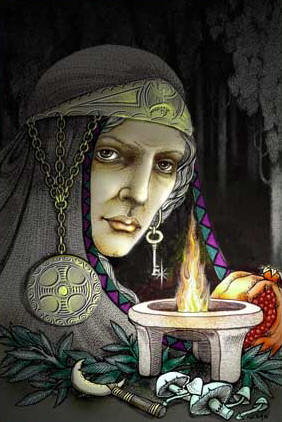 The symbolism of the Crone, who is the final aspect of the Wiccan Triple Goddess.

She is called the Unavoidable, the Mystery of Mysteries. From Her, all things proceed, and to Her, all things must return. From Her cauldron, all life emerges. She is the night sky at the darkest moment of the dark moon and the barren earth at the dead of winter.

Her names are Hecate, Cerridwen, Morrigan, and Kali. She is dark Demeter and her darker daughter, Persephone, the voice of doom. She is the unchanging shape-changer. At once, we see Her as Warrior, Midwife, Weaver, Dancer, and Devourer. The Keeper of the Keys to all magick, She is the Great Queen. She is the Hag. She is the Holy Terror.

The Crone may be the single most difficult thing for a newcomer to the Craft to comprehend. Early programming teaches us that "dark" is "bad", "black" is "evil", and that death is to be feared. As babies, we are told that the night-light in our room is there so we will not "be afraid of the dark". Telling us very plainly, of course, that if it were dark, we would have something to fear. We grow up with a deep-rooted fear of the dark, and of the unknown, that often refuses to be conquered even when we know, intellectually, that there is nothing to fear.

As we perform the rituals of the Wheel of the Year and we experience the Crone's cycle, as well as those of the Sacred King and Summer Queen, we regain the realization that She, who is the Bringer of Death at Summer Solstice, also gives birth to the light in winter.

Let's look at the Crone's cycle within the Sacred King cycle: She gives birth to the light at Yule; at Candlemas, She returns as the Maiden. At Spring, She is the fate of the King, and She is the chaperone at the Beltane wedding. She is Death, as She receives the sacrifice at Summer Solstice, and She becomes a new widow at Lammas. She is the seeker of the Lord of Death at Autumn Equinox and, finally, she is the oracle of wisdom at Hallows, when it is She who can see across time and hold out hope of the spring to come. She manifests differently in each of the various myth cycles, but her message is the same in each of them. Her presence is less manifest during the bright half of the year, becoming more so after Summer Solstice.

We start to realize that death is with us at birth, as it is out of death that we are born into life. She is ever-present and inevitable, even during the youthful years, when She is barely visible to us. When we pass middle age, we become increasingly aware of death, as we become increasingly aware of the Crone in the last half of the year. As we reach our "Autumn Years", we begin to see death as a friend and by old age (Hallows); we can look forward to a new spring, a new life, on the other side of the veil.

As new realizations reveal to us a new comprehension of our own mortality (and immortality), through images communicated (by the myth) to the deep mind, our programming begins to release us, and the fear lessens, until finally the conscious mind is able to accept the new information, and we experience the change in worldview that is always the result of an initiatory experience.

At the same time, the ingrained fear of getting old that most of us bear is also shed. When we come to realize that old age is simply a stage in a cycle in which new youth is as sure as the sun coming up tomorrow. We can see old age as a time when the Crone's wisdom is made manifest within us.

The Crone plays a very important part in the myth and ritual of the Festival cycle, even though Her role is less obvious than that of the Sacred King or Summer Queen. Her message to the deep mind is vital to the initiatory experience and to the release from the limitations of programming.

Coming to know the Lady of Death brings us awareness of rebirth, and through that awareness, we become more aware of our own immortality, our own divinity. Learning to face Her without fear carries us one step further upon the path, one step closer to our goal: union with our higher selves and with the divine.

by Doug and Sandy Kopf