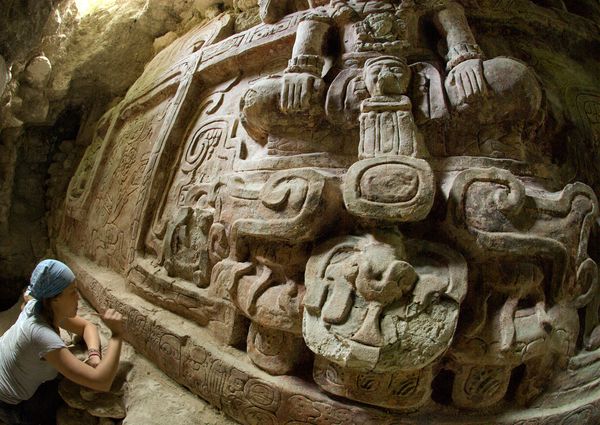 Archaeologist Anya Shetler cleans an inscription below an ancient stucco frieze recently unearthed in the buried Maya city of Holmul in the Peten region of Guatemala. Sunlight from a tunnel entrance highlights the carved legs of a ruler sitting atop the head of a Maya mountain spirit.

The enormous frieze—which measures 26 feet by nearly 7 feet (8 meters by 2 meters)—depicts human figures in a mythological setting, suggesting these may be deified rulers. It was discovered in July in the buried foundations of a rectangular pyramid in Holmul.

Maya archaeologist Francisco Estrada-Belli and his team were excavating a tunnel left open by looters when they happened upon the frieze. "The looters had come close to it, but they hadn't seen it," Estrada-Belli said.

According to Estrada-Belli, the frieze is one of the best preserved examples of its kind. "It's 95 percent preserved. There's only one corner that's not well preserved because it's too close to the surface, but the rest of it isn't missing any parts," said Estrada-Belli, who is affiliated with Tulane University, Boston University, and the American Museum of Natural History and who is also a National Geographic Explorer. His excavations at Holmul were supported by the National Geographic Society/Waitt Grants Program.

"We often dream of finding things this well preserved, and Francisco did it," said Canuto, who is the director of the Middle American Research Institute at Tulane University in New Orleans; he was not involved in the project.

For example, despite being mostly faded away now, traces of red, blue, green, and yellow paint are still visible on the frieze.

"It gives you an idea of how intricate and ornate these sites that we are excavating must have been during their apogee," Canuto said. "These sites must have been a feast for the eyes when they were inhabited."

David Stuart, a Maya hieroglyph expert at the University of Texas at Austin, pointed out that archaeologists think most large Maya temples were probably decorated with similar sorts of designs.

"But not all temples were so carefully buried and preserved like this," said Stuart, who did not participate in the project. "Also, each temple facade was slightly different and therefore unique in terms of its detail and message." (Explore an interactive map of key Maya sites.)

The section of the temple at Holmul where the frieze was found dates back to about A.D. 590, which corresponds to the Maya classical era, a period defined by the power struggles between two major Maya dynasties: Tikal and Kaanul.

The two kingdoms competed with one another for resources and for control of other, smaller Maya city-states. Until now, however, it had been unclear which dynasty Holmul owed its allegiance to, but an inscription on the newly discovered frieze reveals that the temple was commissioned by Ajwosaj, ruler of a neighboring city-state called Naranjo, which archaeologists know from other discoveries was a vassal city of the Kaanul kingdom.

"We now know that Holmul was under the influence of the Kaanul dynasty," Canuto said.

In 2012, Canuto's team found and deciphered a series of hieroglyphically inscribed panels at another Maya city of a similar size to Holmul, called La Corona, which was also under the patronage of the Kaanul kingdom.

Recent discoveries at sites like La Corona and Holmul are helping reveal how these sites, despite being relatively small compared with some of their neighbors, were important players on the region's larger geopolitical stage.

"We're now beginning to appreciate how all these hierarchical levels of sites were involved in a larger political game that put them on [the side of either Tikal or Kaanul]," Canuto explained. (See "Why the Maya Fell.")

Why was Holmul—a minor city that was home to only 10,000 to 20,000 people—so important to the Tikal and Kaanul dynasties?

Previous work by Estrada-Belli suggests Holmul occupied a strategic position for both kingdoms. The city lay along the best east-west route between the Tikal dynasty's capital city, also called Tikal, and the coast. It also lay along a north-south route between the Kaanul capital city of Dzibanche and the Guatemalan highlands that did not pass through Tikal territory.

The Guatemalan highlands contained precious resources such as basalt, obsidian, and jade that were coveted by both kingdoms.

"A [Maya] king without jade was no king at all," Canuto said.

By controlling Holmul in the east and La Corona in the west, the Kaanul dynasty was able to effectively access these riches without going through the capital city of its rival.

The frieze still lies buried in Holmul where it was initially discovered because it is too big to move, said lead archaeologist Estrada-Belli.

"We're going to try to preserve it and create a stable environment around it so people can eventually visit it," he said.

"We're very concerned about its present condition, so we had to re-bury the entrance tunnel to keep the humidity and climate around it stable."

The find is exciting readers around the web. @JalilCan tweeted, "I keep seeing "Ancient Maya Carvings found..." these Archaeologists NEED TO LEAVE STUFF FOR PEOPLE LIKE ME TO FIND."

Other tweeters talked up the struggle between Maya powers hinted at in the frieze, while others remarked at how the carvings used to be brightly colored.

We have 972 guests and no members online