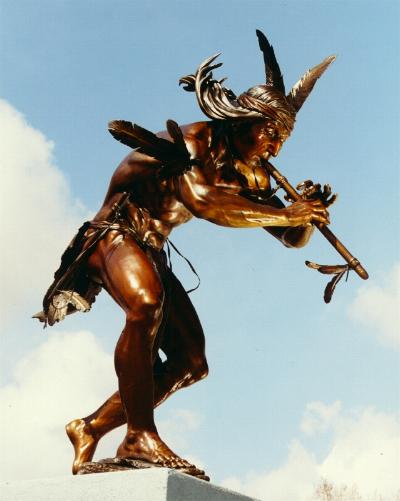 A Message from Navajo

“The women welcome him, for he offers the promise of many pleasures,

The men look forward to his arrival, for he brings prolonged virility,

The children happily greet him, for he weaves playful, magical melodies,

The land salutes him, for with him comes the much awaited rains, and

The crops thank him, for he will surely help them deliver a bountiful harvest.”

Kokopelli had been walking for many days when he spied the upcoming Aztec village not far off. He sought refuge under an almond tree in order to rest and ritually prepare himself for the next days encounters with this distant clan in unfamiliar territory. After finding a river near-by to wash, Kokopelli set to the task of listening to the land. He pondered: What was needed her by her inhabitants? What spiritual laws, if any, had not been honored? What was beautiful about this tribe? What was askew in their thinking? Nature would reveal all the secrets of these proud Aztecs.

Later in the evening as the tribe slept, Kokopelli took out his flute and began to play a mysterious star tune. The flute helped him to go into a trance-like state so that he could listen to the people’s collective dreams. In this way, he would be able to discern what he had to offer to the people and this land. Just before sunrise, satisfied with his findings, Kokopelli slept a rejuvenating sleep. He would not enter the village until after dusk of the next day.

Dressing himself in an elaborate headdress of vibrant red macaw feathers and a red loincloth, Kokopelli ’s intention, through his costume, was to call forth the energy of fire & fertility. His allies, the Star Nation, had made it clear of the utmost necessity of infusing this community with his seed. Kokopelli further proceeded to paint his body with the ancient symbols that called forth the rains. The people of this land had grown very disgruntled waiting on the rains, and their three sacred crops; beans, squash and corn, were failing fast.

Placing his heavy pack upon his back, a sack filled with intriguing goods & objects from the far away lands in which he had travelled, he proceeded to prepare himself for arrival in this down trodden village. As he walked towards the people, he played a hauntingly, soft melody to announce his presence. He arrived just as the tribe was starting their evening cooking fires. All heads turned towards him with curiosity to see who was this mysterious stranger arriving so late in the day.

Recognition was instant. All tribes from the souther region of the Colorado down to rainforests of Mexico had grown up on the folklore and myths of Kokopelli. Maidens hid their blushing faces, mothers longingly sighed, young girls ran to his feet jumping up and down with excitement. The men and boys stood back in awe and jealousy. Everyone recognized the infamous Kokopelli. From the time of puberty, both the young girls and boys were taught to carve statues bearing an enormous penis (symbolic of a healthy maleness and prolonged virility) of this famous demi-God. Mothers would whisper hushed female stories to their daughters of Kokopelli’s renown sexual prowess. Young men would flatter themselves by calling their penis’ Kokosticks or they would boast of their sexual exploits as a Kokonight. It was well-known through the tribes that baby’s born of Kokopelli’s seed were blessed with special talents. Any woman chosen by Kokopelli to be his consort, was honored by the tribe, throughout her entire matriarchal lineage, as a favorite of the gods.

The chief of the village immediately called his counselors to build a communal celebration fire or their honoured guest as this surprising evening now promised joy, stories, sharing, laughter, enthusiasm and some much-needed hope to this weary tribe who were facing famine & drought. The villagers danced, performed, sang and told stories late into the night for their welcome visitor, Kokopelli. When it was Kokopelli’s time to share, he wove a performance worthy of a true magician. With flute in hand, he sang into existence an atmosphere of another world. Rhythmically dancing, he entranced the crowd and took their spirits to the Stars. At various moments in his song and dance, he would remove a sacred object from his sack that mesmerized and dazzled the people. When his lungs were exhausted, and the people filled up, Kokopelli wrapped his flute in a woven cloth, kissed it and offered it up to the Great Star Nation, “This flute carries the music of the Great Star Nation to the Great Earth Mother and calls forth the Thunder-beings to make love to her. In their love-making, we ask that these lands will be renewed with rain”, exclaimed Kokopelli.

A cool breeze began to blow, the fire pit ignited a sparkle of embers as lightning flashed across the sky and thunder sounded in the background. The people exploded into sounds of disbelief and excitement, wonder and awe. Everyone ran to prepare their water vessels for the oncoming rain. Everyone except for one lovely lady. A married woman named Jasmine remained with her two small children. Her husband loomed not far behind her. Kokopelli walked to her side. “Why do you not run to fill your water vessels”, he asked? I heard your flute last night, it called to me, it told me to prepare for the rain. My pots have already been placed out”, she replied. Kokopelli smiled! This woman was who he was to leave his seed with, she had already been chosen for him.

Kokopelli turned to her husband as he pulled two small flutes from his bag, gifts for the children. He placed his flute in the husbands’ hands. “This is my most sacred possession, my lifeline to the Stars, from whence I come, and my musical instrument in communicating goodwill to the people and the lands in which I travel. I ask that you guard it with love, dignity and respect, just as I shall treat your wife in our time together.” The husband of Jasmine accepted this honor. “My flutes presence in your home, albeit short, will bless it with a magical starlit essence from this day forth. Whatever you ask of the Star Nation, within reason, shall be granted. If your children sleep with it near their beds over the next nights, they will be infused with my musical talent and they will, by osmosis, know, without study, how to play and master their own flutes. This is my gift to you,” said Kokopelli. The husband gracefully took leave of his wife and Kokopelli.

The Aztecs say that this union brought forth a great spiritual leader, one who knew how to invoke the thunder and lightning beings at will so that the tribe was never fearful or hungry again. It was said that this spiritual leader had two talented master musician brothers who always assisted him in calling forth the elements.

“Kokopelli play for me,

So my heart may sing,

Canyons of my mind,

Speaks of the Divine.”

We have seen so many articles in the spiritual circles recently about, love, relationship, marriage, and sacred union. Men, I ask you, could you have behaved as this husband did in this story? Could you have lovingly and willingly let your wives go to their destiny’s? Women, I ask you, would you have recognized this calling? Would you have honoured your chosen call? It is challenging times indeed to embrace Kokopelli. And yet, it is important to recognize and reclaim archetypes that have long been driven underground into our subconscious minds. Kokopelli, who has also been called Pan, the Horned One, and probably a hundred other names, long ago was renamed the Devil by the Christians, and in his role as the Devil, a beautiful, caring God was denigrated to something perverted and quite evil.

It is so important to understand the cycles inside of cycles inside of cycles of which we call Life. Spring is the beginning, the true New Year as everything buds and springs back to life. In the Spring, ancient societies, pagaens and indigenous cultures world-wide have always celebrated rebirth, growth and fertility. Can anyone remember the Earth Children Series (Clan of the Cave Bear)? The tribes had these huge spring festivals where everyone was expected to travel and meet at a set location for ceremony & celebration. Can anyone remember The Mists of Avalon? The priestesses and tribes had these huge spring celebrations to honour and bring to life the energy of the Horned One. Young maidens were chosen to represent his female counterpart. Of course this makes a Christian society so nervous. Fertility celebrations, parties for days on end, religious ceremony, fires, lust and wanderlust…wives and husbands removing their rings. I think this makes a lot of people nervous.

In China, prior to the Confucian Dynasty, their society was considered “gylanic”- a world where males and females are equals, neither patriarchal or matriarchal. We witness this in the fact that their shamans were both female and male. After Confucian thought took over, the emotional world of Chinese society became concerned with law, order, filial piety, and control. That about sums it up, the patriarch has never allowed the free spirit of the divine feminine to roam wild. It has rather restricted, constricted, boxed and contained everything on earth. From the way we count time to the way we view marriage and relationship to the way we use our sexual energy.

Sacred union is the sharing of ourselves, our bodies in a sacred, respectful manner. This may be a one time encounter (in a temple with a tantrica). Or this may be a lifetime of lovemaking (in a twin flame or soul mate marriage). Whatever form it takes, I encourage you to enjoy where the spirits will lead you and your body. Pleasure is a gift from the Goddess, reawakened in us each spring with the aid of our most favourite and revered Spring God: Kokopelli. As we all continue to contribute to the deconstruction of our worlds’ patriarchal systems, it will be imperative to reclaim the archetypes that we have lost in our most recent dark ages. I welcome back Kokopelli/Pan/The Horned One. Well, actually, he knows, I never forgot him. As an old Pagaen, he has always been alive and well in my life.

(loves the Spring, Beltane and all Fertility Rites)

Universal Copyright 2010 is authorized here. Please distribute freely as long as the http://mayasoma.wordpress.com is included as the resource and this information is distributed on a non-commercial no charge basis.