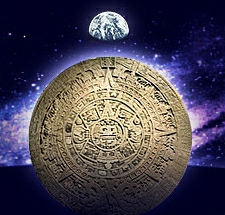 Practically the whole world strongly experienced the frequency increase associated with the beginning of the Ninth wave (Universal Underworld, Mar 9th, 2011) as this manifested in the earthquake in Japan and the ensuing events. But what is this Ninth wave about? It is easy to see the “chaos” and “catastrophes,” but maybe not so easy to see the overall direction of the process that it carries. I have previously only described the direction of the Ninth wave in very general terms saying that it is about unity consciousness, but exactly what is unity consciousness and how will this manifest through this wave?

To understand this we may begin by studying the Seventh wave that began in 1755 and brought an endarkened unity consciousness to mankind. The Ninth wave also brings a unity consciousness, but one that is enlightened. We have already found a significant parallel between these two waves in that they began with huge Earthquakes, although those as is reasonable, occurred at opposite sides of the Earth, in Lisbon and Japan respectively. Another parallel is that the two waves have started with revolutions to topple existing systems. While the Seventh wave began with the American and French revolutions, whose anti-monarchic nature gradually has spread throughout the world, the revolutions of the Ninth wave have not only rejected monarchic rule, but the phenomenon of dominance and rule over others as such. Thus the Oneness field of consciousness (see below) carried by the Ninth wave will not allow for systems where people give their power away to someone they have elected every four years or so. A deeper freedom based on the sovereignty of all souls is now being called for.

Moreover, the Oneness field of consciousness will not allow for an economic system where the power to print money determines what activities people spend their lives with. The world revolution carried by the Ninth wave potentially develops a much deeper freedom and oneness than either the monarchy of the sixth wave or the democratic institutions of the seventh wave. The driving force behind the world revolution of the ninth wave is the divine guidance that the unity consciousness allows. What is happening in the world today could thus be described equally well in religious/spiritual terms or economic/political. The chief point to realize is that ultimately the course of events, and the breakdown of dominance, is a result of a cosmic plan that has been described by the nine levels of the Mayan calendar with their different polarities (see figure below). Since no human being has any power to change these polarities the overall direction of the cosmic time plan is irreversible.

This consciousness of the Ninth wave was as expected first evident around the midline of the planet at the 12th longitude East between East and West. The opposing polarities of consciousness generated by the 6th and 8th waves led to the collapse of dominance along this line already at the beginning of the seventh day of the Galactic Underworld on November 3, 2010 and two months later the processes surfaced in Tunisia and Egypt. The revolutions there were much aided by the social media networks that had been developed by the Eighth wave, but also showed the emerging role of women and a unity between Muslims and Christians in Egypt where people were singing “we are all one” in Kairo. (That some of this might have been temporarily reversed does not change the overall direction of where things are going). 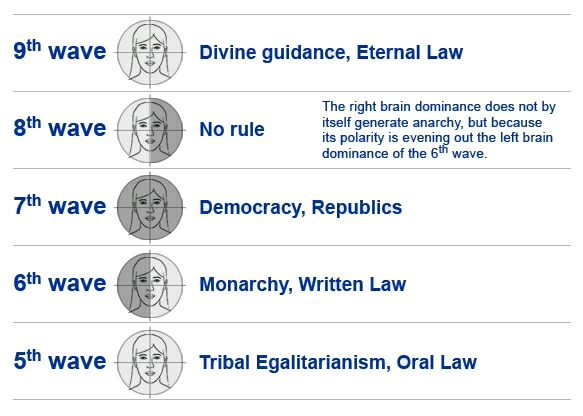 This oneness revolution is now spreading notably to a few European nations such as Portugal, Greece and Spain. At first sight this may not seem to be part of the oneness revolution as the demands raised by people are mostly economical and directed against austerity plans determined by the EU and/or IMF/World Bank etc. Yet, the economic system of the world is far from based on oneness and separates people in haves and have-nots and many are now finding this unacceptable. These European nations are also, like Arab North Africa, located around the planetary midline and so they are participating in the process at a relatively early point of the Ninth wave. As the Ninth wave continues more and more aspects of our world that are inconsistent with oneness will be highlighted and events, sometimes forced upon us by catastrophes like the one in Japan, will trigger calls for radical change. Technologies, which are not based on unity with the Earth will increasingly come to be rejected. The Ninth wave will however not generate a linear process of change towards oneness and people in the far West (like the US) and far East (China) are going to be affected in ways that are different from what happens in Europe or the Arab world.

Regarding the West here are currently discussions going on as to when a very likely collapse of the value of the US dollar will take place (which may be looked upon as part of the Oneness revolution) and some people think that it is natural that it will happen in the Fifth night (August 18 - September 4). My own view is however different and I tend to think that a dollar collapse may come to happen in steps during days 3, 4 and 5. Since such a collapse is not destructive from the perspective of Oneness it seems logical to me that it would manifest in a day or a series of days. I instead tend to think that the fifth night may come to carry a temporary return to the old monetary system in some form, which from the perspective of the Earth is what is dangerous.

Assuming that we are approaching a collapse of the value of the dollar and the world’s monetary system (with the immense distress it would probably mean) it is truly time to think about what this should or could be replaced with. Understandably, many people ask how they should protect themselves as individuals from such a collapse and find ways of investing constructively. This may or may not be possible even if there are suggestions as to how to do it on the Internet. The deeper question is to ask how to respond as a planet to a monetary collapse in a situation where the new consciousness of oneness will not allow dominance based on money to return, at least not in the long term. This is by definition not a discussion that the mainstream media will bring up since it would risk precipitating the events that it seeks to avoid.

On my own part I essentially see three different systems that could replace the current use of money if there is a monetary collapse. The first is that all people go on and continue to do what they already have been doing and ignore the fact that there is no exchange of money between them. The farmers continue to produce food, the truck drivers continue to deliver it to the cities, people stay in their homes without paying rents or mortgages, etc without any exchange of money taking place between them. This is probably the best response to a monetary collapse, but it would hardly be consistent with existing laws and contracts based on lower levels of consciousness. It would naturally also create problems for many people who have primarily been working with handling money if this is no longer used and it is naïve to believe that such a shift could happen without much conflict. A second alternative way to deal with a monetary collapse would be to create a system of food stamps or rationing that would allow for everyone to have a secured access to the necessities of life. A third alternative is to create local currencies as a basis of exchange. The problem with this is that it would not include the many people that are too young or old or are sick or disabled to be able to offer exchangeable services. There may be other alternative ways to handle a monetary collapse and these are only a few hints in a discussion that I think is now necessary as to how to respond to a such with a perspective of serving the whole.

The above remarks also have as a consequence a very different definition of oneness than many currently have and give more emphasize to its practical manifestations than to the mental or spiritual state of an individual. This is not to say that methods that may help individuals attain states of unity consciousness would not be valuable. In fact I believe that to be successful the world revolution that has not started must be divinely guided, and be based on a desire by its participants to serve the divine plan. Yet, this definition of oneness does imply that a world of oneness cannot be created without a practical collective effort. After all, who we are is largely defined by our relationships and so only by transforming the nature o our relationships with others in a very profound and practical way can a world in harmony be born. No one knows how this world oneness revolution will play out in its details, but we know that it is irreversible and that it is likely to intensify as we approach the culmination of the Mayan calendar on October 28, 2011. This incidentally is the time when the comet Elenin is at its shortest distance from Earth and if nothing else this may serve to guide us to cosmic consciousness in a spiritual sense, which ultimately is what this political and economical change provides a basis for. The completion date of the Mayan calendar however only means that the “final field” of consciousness is then established on our planet. It does seem likely that it will then still take some “time” after this date until a harmonious world settles, but “time” will then never again be the same.

Carl Johan Calleman, Ph.D. is the author of three books about the cosmic plan as this may be understood from the Mayan calendar: Solving the Greatest mystery of Our Time: The Mayan calendar (2001), The Mayan Calendar and the Transformation of Consciousness (2004) and The Purposeful Universe (2009). He has also been part of initiating several global events based on shifts in the Mayan calendar such as most recently the Conscious Convergence ofJuly 17-18, 2010.