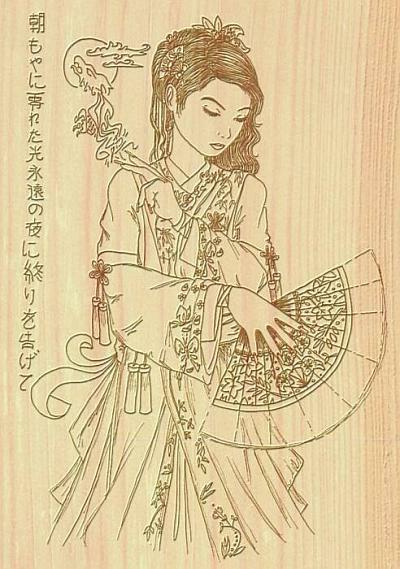 Amaterasu (天照 ), Amaterasu-ōmikami (天照大神／天照大御神 ) or Ōhiru-menomuchi-no-kami (大日孁貴神 ) is, in Japanese mythology, a sun goddess and perhaps the most important Shinto deity (神 kami). Her name, Amaterasu, means literally "(that which) illuminates Heaven". She was born from the left eye of Izanagi as he purified himself in a river and went on to become the ruler of the Higher Celestial Plain (Takamagahara).,

She is also said to be directly linked in lineage to the Imperial Household of Japan and the Emperor, who are considered descendants of the kami themselves.

The Story of Amaterasu

Amaterasu is described in the Kojiki as the sun goddess who was born from Izanagi's left eye. She was also accompanied by her siblings Susanoo, the storm deity, and Tsukuyomi, the moon deity, who were born from Izanagi's nose and right eye respectively. In the Kojiki, Amaterasu is described as the goddess from which all light emanates and is often referred to as the sun goddess because of her warmth and compassion for the people who worshipped her. Some other myths state that Amaterasu was born from water.

Most of her myths revolve around an incident where the goddess traps herself in a cave because of her brother's actions. For a while, everything among the three revered gods was peaceful and all of the world ran smoothly. One day, Susanoo, in a drunken rampage, trampled Amaterasu's rice fields, filled all of her irrigation ditches and threw excrement into her palace and her shrines. The Omikami asked her brother to stop but he ignored her and even went so far as to throw the corpse of a skinned horse at her hand-maidens who were weaving at the time. The women were killed by the splintered wood from the looms piercing their bodies (in the Kojiki it was their reproductive organs that were pierced). 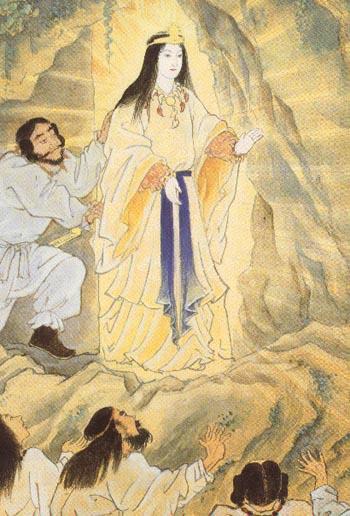 Amaterasu was greatly angered and in protest she shut herself in the Heavenly Cave and sealed it shut with a giant rock. As a result, the world was consumed with darkness. Without her, everything began to wither and die. Countless Kami gathered in front of her cave and devised a way to lure her out. They all sat around the cave and set up a mirror across from the entrance. Ame-no-Uzume, the voluptuous goddess of merriment turned over a wash-tub and began a sensual dance, tapping the beat on the tub. She exposed her breasts and lifted her skirts as she danced. All of the gods made a great noise of yelling and cheering and laughing. Amaterasu peeked out to see what the noise was about. She asked the nearest god what was going on and he replied that there was a new goddess. When Amaterasu asked where she was, he pointed to the mirror.

The Omikami had never seen herself before and when she caught her reflection, she stared at the radiance of her own form. She was so surprised she said "omo-shiroi", which means both "white face", which the Omikami had, and "fascinating". When she was out of the way, Tajikara-O shut the rock behind her. Having lured her out of the cave, the gods convinced her to go back into the Celestial Plain and all life began to grow again and become strong in her light. Once back in the Celestial Plain, she made sure that she was ready for her brother's harsh actions again by having a bow and quiver at her side.

Later she sent her grandson Ninigi-no-Mikoto to pacify Japan: his great-grandson became the first emperor, Emperor Jimmu. He had a sacred sword (Kusanagi), jewel (Yasakani no magatama), and mirror (Yata no kagami) that became the Japanese imperial regalia.

Amaterasu is credited with inventing the cultivation of rice and wheat, use of silkworms and weaving with a loom.

Kukai famously linked Amaterasu with Dainichi Nyorai, a central manifestation of the Buddha, whose name is literally "Great Sun Buddha". Thus Amaterasu is held as an divine Emanation of Buddha Vairocana.

Her most important shrine, the Grand Shrine of Ise, is in Ise in western Honshū. The shrine is torn down and rebuilt every 20 years. In that shrine she is represented as a mirror, one of the three Japanese imperial regalia. The Ise Shrine is said to be the home of Amaterasu. This shrine, however, is not open to the public.

She is celebrated every July 17 with street processions all over the country. Festivities on December 21, the winter solstice, celebrate her coming out of the cave. 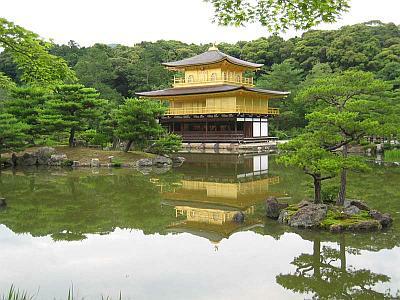 Difference between Kojiki and Nihon Shoki

There are slight differences between the description of the goddess in Kojiki and that in Nihon Shoki. Mainly, the story of Kojiki is much better known.

First is the story of her birth. In Kojiki, she was born after Izanagi failed to retrieve Izanami from Yomi. However, in Nihon Shoki, Izanagi and Izanami, who was still alive, together decided to create the supreme deity to reign over the world, and gave birth to Amaterasu.

The episode of sending her grandson to Ashihara no Nakatsukuni (Japan) is also different in two myths. In Kojiki, Amaterasu commanded her son and other gods to pacify Japan. On the other hand, the main article of Nihon Shoki records the myth that it was Takamimusubi-no-Kami who took control of the event and sent his maternal grandson Ninigi to Japan. The role of Amaterasu is ambiguous in the episode.

In both cases, Nihon Shoki records similar version of Kojiki episode as "aru-fumi", the alternative episode.

The Goddess and the Imperial family

In 1946, Emperor Shōwa issued the Humanity Declaration. It was effectively a renunciation of the conception of akitsumikami (現御神), divinity in human form, and claimed his relation to the people did not rely on such a mythological idea but on a historically developed family-like reliance. Many authors, such as John W. Dower and Herbert Bix, who dispute the former interpretation, consider that by choosing the word akitsumikami (現御神) instead of arahitogami, Emperor Shōwa didn't actually deny his divine descent from goddess Amaterasu Omikami.

It must however be noted, that according to Shinto myths, all Japanese people descend from the gods, not only the Emperor. On this topic, Emperor Shōwa expressed in December 1945 his point of view to his vice-grand chamberlain Michio Kinoshita: "It is permissible to say that the idea that the Japanese are descendants of the gods is a false conception; but it is absolutely impermissible to call chimerical the idea that the emperor is a descendant of the gods." 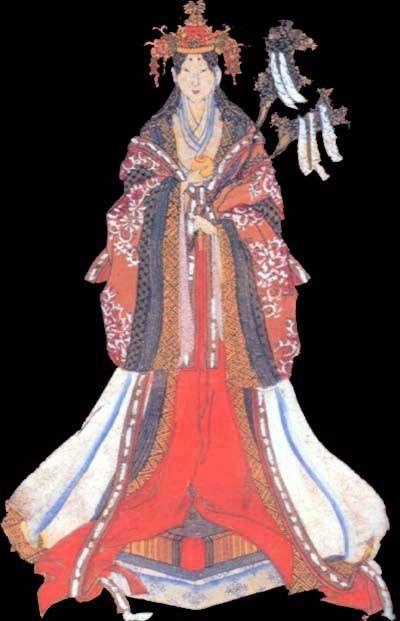