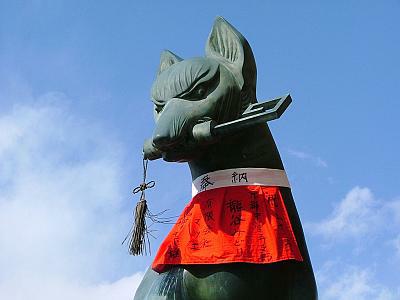 In 1867/68, the Tokugawa era found an end in the Meiji Restoration. The emperor Meiji was moved from Kyoto to Tokyo which became the new capital; his imperial power was restored. The actual political power was transferred from the Tokugawa Bakufu into the hands of a small group of nobles and former samurai.

Like other subjugated Asian nations, the Japanese were forced to sign unequal treaties with Western powers. These treaties granted the Westerners one-sided economical and legal advantages in Japan. In order to regain independence from the Europeans and Americans and establish herself as a respected nation in the world, Meiji Japan was determined to close the gap to the Western powers economically and militarily. Drastic reforms were carried out in practically all areas.

The new government aimed to make Japan a democratic state with equality among all its people. The boundaries between the social classes of Tokugawa Japan were gradually broken down. Consequently, the samurai were the big losers of those social reforms since they lost all their privileges. The reforms also included the establishment of human rights such as religious freedom in 1873.

In order to stabilize the new government, the former feudal lords (daimyo) had to return all their lands to the emperor. This was achieved already in 1870 and followed by the restructuring of the country in prefectures.

The education system was reformed after the French and later after the German system. Among those reforms was the introduction of compulsory education.

After about one to two decades of intensive westernization, a revival of conservative and nationalistic feelings took place: principles of Confucianism and Shinto including the worship of the emperor were increasingly emphasized and taught at educational institutions.

Catching up on the military sector was, of course, a high priority for Japan in an era of European and American imperialism. Universal conscription was introduced, and a new army modelled after the Prussian force, and a navy after the British one were established.

In order to transform the agrarian economy of Tokugawa Japan into a developed industrial one, many Japanese scholars were sent abroad to study Western science and languages, while foreign experts taught in Japan. The transportation and communication networks were improved by means of large governmental investments. The government also directly supported the prospering of businesses and industries, especially the large and powerful family businesses called zaibatsu.

The large expenditures led to a financial crisis in the middle of the 1880's which was followed by a reform of the currency system and the establishment of the Bank of Japan. The textile industry grew fastest and remained the largest Japanese industry until WW2. Work conditions in the early factories were very bad, but developing socialist and liberal movements were soon suppressed by the ruling clique.

On the political sector, Japan received its first European style constitution in 1889. A parliament, the Diet was established while the emperor kept sovereignty: he stood at the top of the army, navy, executive and legislative power. The ruling clique, however, kept on holding the actual power, and the able and intelligent emperor Meiji agreed with most of their actions. Political parties did not yet gain real power due to the lack of unity among their members.

Conflicts of interests in Korea between China and Japan led to the Sino-Japanese War in 1894-95. Japan defeated China, received Taiwan, but was forced by Russia, France and Germany to return other territories. The so called Triple Intervention caused the Japanese army and navy to intensify their rearmament.

New conflicts of interests in Korea and Manchuria, this time between Russia and Japan, led to the Russo-Japanese War in 1904-05. The Japanese army also won this war gaining territory and finally some international respect. Japan further increased her influence on Korea and annexed her completely in 1910. In Japan, the war successes caused nationalism to increase even more, and other Asian nations also started to develop national self confidence.

In 1912 emperor Meiji died, and the era of the ruling clique of elder statesmen (genro) was about to end.