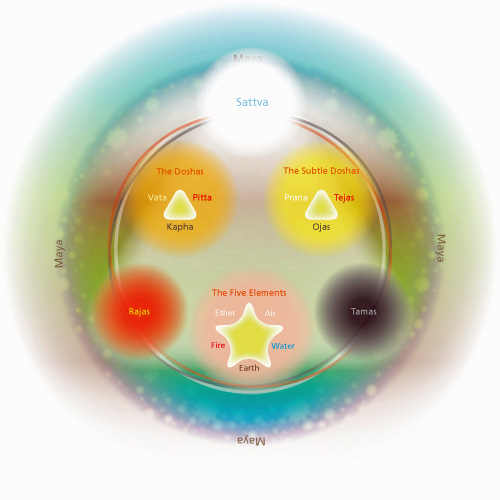 Ayurveda is a Sanskrit word which translates as 'Ayoos' meaning life and 'veda' meaning knowledge. The philosophy and aim of Ayurveda is to empower and help people heal themselves. It is a science and art of Self-understanding. Ayurveda developed out of India some 5000 - 10,000 years ago by ancient rishis or sages who attuned themselves to the ways of nature. They attuned themselves to the elements of ether, air, fire, water and earth. These elements make up everything in the subtle and material world. This knowledge was then passed down through generations through songs, chants and then eventually they were written down in the oldest books existing on the planet, the vedas. This knowledge pertaining to health became known as Ayur/veda. Ayurveda is the traditional medicine of India, but over the last decade is gaining popularity as an alternative or compliment to Western medicine.

The entire world, including the human body, is made up of the five great elements. The concept of the elements is not to be taken literally. They are vibratory patterns, conditions of matter or principles of density.

The five elements theory is a different paradigm from the scientific method to which we are accustomed to viewing the body. It is a different tool for extracting a particular kind of information from Nature.

The five elements combine in endless combinations to form each and every person's unique constitution. The idea of every person having a unique balance of energy is central to Ayurveda. These three energies are known at Vata, Pitta and Kapha. Another way to think of the same three body types is Ectomorph (Vata), Mesomorph (Pitta) and Endomorph (Kapha) described by a psychologist, William Sheldon in the 1930s.

Vata dosha (constitution) is said to be made up of the air and ether elements. This means that is has qualities which are similar to these elements. Vata is very much like the wind. It is cool, dry and mobile. In the body, those people with a Vata nature will experience more of these qualities. Their bodies tend to be light, their bones thin, and their skin and hair dry. They often move and speak quickly. When out of balance they may lose weight, become constipated and have weakness in their immune system and nervous system. These qualities also reflect in their personality. Those with a Vata nature tend to be talkative, enthusiastic, creative, flexible and energetic. Yet, when out of balance they ma also become easily confused and overwhelmed, have difficulty focusing, making decisions and trouble sleeping. This becomes more apparent when the are under stress. Emotionally they are challenged by cool emotions like worry, fear and stress.

Pitta dosha is said to be made up of the fire and water elements. Fire is more predominant and those people with a predominant Pitta nature have many of the qualities of fire within them. Pitta, like fire, tends to be hot, sharp and penetrating. It is also somewhat volatile and oily. The oily nature of Pitta is related to the secondary component of water. People with a Pitta nature reflect these qualities. They tend to be warm, have somewhat oily skin, penetrating eyes and sharp features. They tend to have moderate weight and good musculature. When out of balance, they tend toward inflammation, diarrhea, infections, skin rashes and weakness in the liver, spleen and blood. These qualities reflect in their personality. Pitta people tend to be highly focused, competitive, capable, courageous, energetic and clear communicators who get right to the point. They like to solve problems and when under stress they dig in their heels. They can, however, also become overly intense and speak with a sharp tongue. They make great friends but feared enemies. Emotionally they are challenged by the heated emotions of anger, resentment and jelousy.

Within the Kapha dosha these is a predominance of the water and earth elements. Like these elements Kapha tends to be cool, moist, subtle, and heavy. In the body earth and water qualities manifest as dense, heavy bones, lustrous, supple skin, low metabolism, large stock frames. In addition, those with a Kapha nature tend to feel cool. When out of balance, Kapha individuals are prone to gaining weight and tend to have weaknesses in their lungs and sinuses where there is an accumulation of mucous. The word 'Kapha' translates as mucus. These qualities also reflect in their personality. The heavy, stable nature of Kapha reflects in a stable personality which is not prone to quick fluctuations. Those with a Kapha nature handle stress very well, often not even noticing that it exists. They don't like change, are generally conservative and would prefer to keep things just the way they are. Those with a Kapha nature are also comfort seekers. This relates to the soft watery nature of Kapha. Too much comfort, however can lead to a lack of motivation and feeling of becoming stuck. When Kapha is out of balance, the heavy emotions of depression and lethargy result.

We must remember that we are all a combination of the three doshic energies. On the most fundamental level, Pitta is our metabolism, Kapha is our structure and Vata is the mobility that brings action and life into creation. Without all three energies, we simply could not exist. 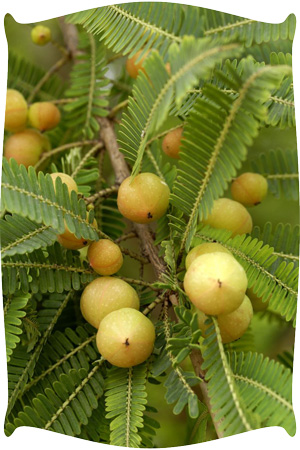 In Ayurveda, foods are classified into six tastes:

Ayurvedic healers recommend that you include all of these six tastes at each main meal you eat. Each taste has a balancing ability, and including some of each minimizes cravings and balances the appetite and digestion. The general North American diet tends to have too much of the sweet, sour and salty, and not enough of the bitter, pungent and astringent tastes.

Amalaki contains five of the six tastes (does not have salt), which is a very rare and valuable property because it indicates how this one herb balances all the laws of nature operating in the mind and body.

We have 796 guests and no members online