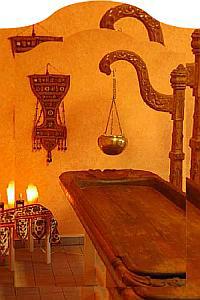 China has their ancient medicine, Traditional Chinese Medicine (TCM), and India has its ancient medical version called Ayurveda. Both go back 5,000 years or more. This article focuses on Ayurveda.

They do this by examining skin tone and color, eyes, and the tongue, using a sophisticated awareness of the tongue's subtle characteristics that indicate different health issues.

They also determine different aspects and nuances of your pulse by hand, not just pulse rate and strength. Then they ask questions about your lifestyle including diet, exercise, and mental and emotional issues.

All of this determines your doshas and their probable imbalance. A dosha is a unique body/mind principle or dynamic. There are three basic doshas and each is subdivided into five categories.

The doshas are vata (wind), pita (heat or fire), and kapha (earth and water). Each dosha contains one or two of Ayurveda's five elements: Air, space, fire, earth, and water.

Although we contain all three doshas, one or more is usually predominant and it determines our metabolic type and essential constitutional nature, or prakuti. Then a dietary list is prescribed with herbs as required.

If those doshas are a train wreck, then panchakarma, Ayurveda's lengthy total cleansing regimen under close supervision, is recommended.

Some people who underwent panchakarma in Albuquerque, NM, which seems to have the highest per capita concentration of Ayurveda clinics in the USA, experienced radical health improvements, and one even claimed it saved her life.

Essentially, Ayurveda is aligned with natural laws and dynamics without arrogantly trying to one-up nature.

(1) Herbs: A variety of herbs is contained in an Ayurveda clinic's private pharmacy. They are dispensed from their own bulk stocks, and they target one's health issues specifically.

Triphala powder, for digestion and elimination, is the most generally prescribed herbal for westerners who have indulged in the standard American diet.

(2) Overall diet: A complete list of foods that often doesn't require or exclude meats is given to the client according to his or her dosha distribution or prakuti for optimum metabolism. The largest meal should be as close to peak sunshine as possible, and breakfasts should be small.

(3) Ginger root: Ginger tea is the beverage of choice in Ayurveda. It is often served in clinic waiting rooms. Anti-inflammatory ginger is often used in Ayurveda cooking, especially with a dish called kitcheri.

(4) Kitcheri: A dosha-balancing restoration diet that one can do anytime is kitcheri as the main meal for a few or several days. Kitcheri is a blend of several spices, including turmeric, with a basmatic rice and mung bean or lentil stew.

Scroll down the linked list of recipes and you'll find kitchari and a couple of chutnis that can delightfully spice up that kitcheri (http://www.ayurvedaalchemy.com/ayurveda/recipes).

(5) Warm lemon water upon arising is an Ayurveda practice. But before downing that water, scrape your tongue as cleanly as possible with a tongue scraper to get rid of the ama coating, the tongue's evidence of toxic residue from poor digestion.

(6) If you can find a nearby Ayurveda clinic or have the wherewithal to stay in a motel or hotel for 10 days in an area that has a clinic offering panchakarma, such as Albuquerque, you can have your health turned around dramatically. Here's how (http://ayurvedaplace.com).