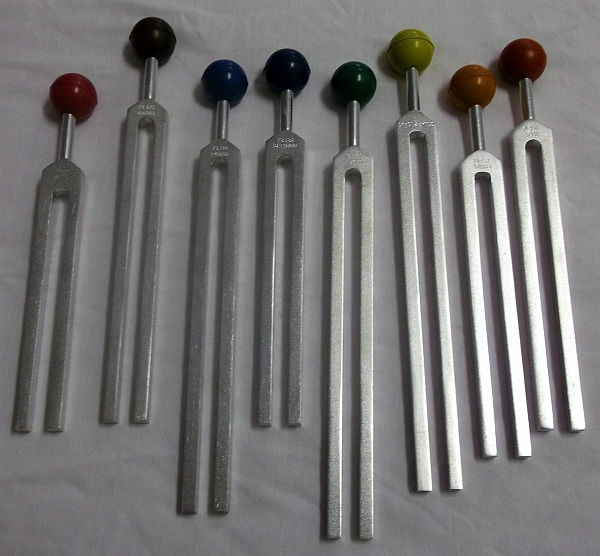 Everything in the Universe is vibrating. The chair you are sitting on, or ground you are standing on is not solid, but made up of molecules all vibrating at different frequencies depending on the materials it is made from. Molecules that are vibrating give off a frequency that can be measured or converted into cycles per second (CPS) or Hertz (Hz).

The human ear can hear between 20 - 22,000 CPS (Hz), so most of the frequencies given off by the objects in the world around us are either below (too dense) or above (too fine) our range of hearing (although this doesn't mean you can't feel them.)

In the days of the first space missions, Astronauts experienced what was termed as 'space-sickness'. Professor Schumann had an idea that this may be down to the astronauts being deprived of the Earth's resonance or 'song'. He fitted an instrument in the next space rocket that emitted 7.83 Hz - the Earth's frequency, and predictably, there was no more space-sickness!

Our organs, chakras and different areas of our bodies, all sing a different note, which when blended together, produce a symphony that is as unique as a fingerprint (although there are basic standard frequencies for optimum health). In an ideal world we would all be in harmony and balance, but due to the constant bombardment of factors (stress, negative energy, pollution etc) we are often being pulled 'out of tune' with our true song, therefore resulting in dis-ease.

Sound Therapy is used in the same way to re-train the chakras and energy systems of the body to sing the right note - often by playing the note the chakra needs. This can be done using ancient and modern instruments such as singing bowls (crystal and Tibetan/Himalayan) voice, tuning forks, gong, mantra, monochord, didgeridoo etc.

Like any complementary therapy, Sound Therapy is best used as a preventative medicine. In an ideal world, we would detect and clear our in-balances before they were able to manifest in physical illness. However, so often this is not the case, as we often keep going until forced to take notice (the piano is so far out of tune it can no longer be played) in which case, it may take longer to clear the existing blockage. However, Sound Therapy has been used with very positive results for a wide range of illnesses such as chronic pain, depression and anxiety, cysts, hormonal problems, insomnia, food poisoning, migraine etc.

This method is by no means new - many ancient civilizations used sound as a powerful tool for healing and transformation. The best practitioners today combine both ancient and modern techniques, producing an effective healing tool that is a synergy of scientific fact, intuition and thousands of years of knowledge. When choosing a sound practitioner, as with any complementary practitioner, check that they are suitably qualified and insured before choosing to work with them.

We have 1415 guests and no members online