Why People Who Take Naps Are More Productive: The Costanza Effect 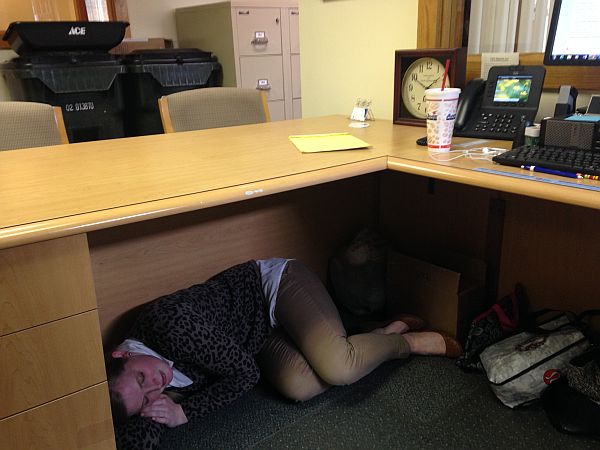 A lot of companies are now encouraging naps.

That's a direct quote from Michael Breus, clinical psychologist and sleep specialist whose research might catch you napping on the benefits of light sleep throughout your workday.

According to Breus, a 25- to 30-minute nap during your work day can help you feel energized and alert for more sustained periods, and companies are buying into it.

As Breus explains: Google and AOL, among many others, are beginning to accommodate their sleepy workforces with special “sleep rooms.”

These rooms designed solely to be napped in are becoming increasingly available to employees, not because of the notion that “employees are lazy,” but on behalf of a recent surge in scientific data linking naps with productivity.

I, for one, have always been a major proponent of “workplace napping.”

It's been that way ever since I saw George Costanza sneak a pillow to the office so he could sleep under his desk. I mean, for a young snoozer like myself, he revolutionized the game. Come to think of it, Costanza really paved the way.

By the time I got to high school, I was hitting naps in the back of class with more regularity than I was the books. No joke. It was 11th grade — I remember distinctly.

I was playing football (yes, tackle football), chasing honeys, experimenting recreationally with marijuana and alcohol — you know, typical high-school-dude sh*t – so, naturally, I was perpetually tired.

In order to catch up on some much needed sleep, I started napping for like 20 minutes in the back of my Spanish class. I figured of all the classes for me to nap in, why not opt for the one that's spoken entirely in language I can't really understand?

It worked great, or so I thought, until my parents met with my Spanish teacher for one of those dreaded parent-teacher conferences. When my parents got home, following the meeting, they were mortified.

I mean, I didn't intend for any disrespect. I was just tired, and napping made me less tired. It was rather simple arithmetic. I wasn't trying to curve my teacher in the slightest.

Anyways, after my parents met with my Spanish teacher a SECOND time, during the follow-up meeting a few weeks later, they returned home with a much different disposition. They were glowing.

Little did they know that I was still sleeping. Oh, I was sleeping, all right. Arguably with even more vigor. But, wait, here's the best part: Ironically, like a day or two after that first meeting, it was Daylight's Savings Time, so the clocks fell behind an hour.

My body clock had been so trained to nap at the same time, every f*cking day, that my circadian rhythms were conditioned to falling asleep for like 20 minutes at 12:35 pm. While the clocks’ might've gotten moved back, my body clock certainly didn't get the memo, and thankfully so.

Instead of napping in Spanish class, I now fell asleep exactly ONE hour earlier, during chemistry (the period before). Sadly, THIS issue didn't get resolved until second semester, in the spring, when the clocks ultimately “sprung ahead.”

Needless to say, I've been advocating the end of nap-shaming long before Michael Breus – although I probably would've benefitted from one of those sleep rooms. Regardless, I’m overjoyed with the recent onslaught of research in our favor.

In a recent article by Teresa Meek of Forbes, more light has been shed on the perks of shuteye during the workday. I recommend you check it out before checking out entirely.

Naps will settle your work-time nerves.

Once again, the key to all our problems seemingly comes down to our good friend cortisol. Cortisol is essentially the stress hormone, which, yeah, explains why I write about it so frequently.

Anyways, according to Mandy Oaklander of Prevention, napping for only 15 minutes during the workday can cut your cortisol levels in half! Didn't get a great night of sleep before the day of a big presentation, and now you're starting to get butterflies in your stomach?

Try sneaking a quick nap in during lunch. You'll feel less stressed as soon as you wake up — just don't forget to set your alarm.

According to ABC News, Harvard researchers proved the existence of “worker burnout,” or the decrease in productivity of an employee as the day wears on.

To gauge the impact of napping on worker burnout, these Harvard researchers conducted a study incorporating naps in between intervals of labor.

Findings showed that a 30-minute nap improved the productivity of workers immediately after the nap – and a one-hour nap could actually boost performance well into the latter stages of the workday.

Just make sure you don't nap TOO long.

It’s important to pay attention to the length of your midday naps. In the case of dozing off during the workday, less is more.

While you might think opting for a double lunch provides the perfect scenario for a “double dose of NyQuil”– so you can come back utterly rejuvenated for your afternoon work – think again.

According to Breus, optimal nap durations are between 25-30 minutes. If you sleep for longer than 30 minutes, make sure you complete a full sleep cycle, which is 90 minutes. If not, you'll find yourself waking up groggier than you were before the nap.

We have 859 guests and no members online