Be Careful of How You Use Words!

At The Point of No Return 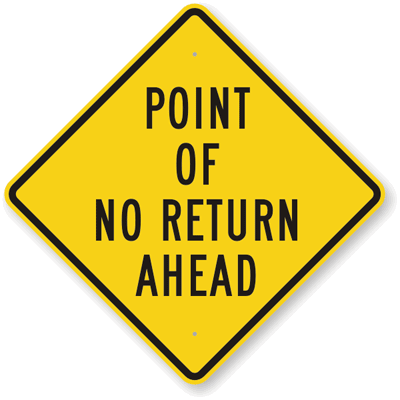 The wrong people are in charge… that’s pretty obvious. But what is not so obvious is how they got there? And once having found an open gate, why have we left them to graze the best pastures while we grovel around in the barren fallow?

This World is run by those of whom the great majority have absolutely no qualifications to be at the helm of anything – not even a small rowing boat. Yet, somehow or other, there they are perched in their palaces, surveying their empires – while simultaneously engaging in the systematic degradation of planet Earth.

Doesn’t matter whether they are generals, headmasters, corporate executives, CEOs of banks, media moguls, ministers or prime ministers, or just about any big bosses – they have the distinction of all acting in unison. While by contrast, the great majority of intelligent and able bodied citizens of this planet, only manage to act – or react – in sporadic and discordant bursts; if at all.

The current controlling masters – and it hasn’t changed much over many centuries – have a commonality of intent: to extract the last ounces of profit and prestige from any and all assets and opportunities that fall into their grasp.

Yet even that isn’t enough for some of them. Profits get a bit boring when they come in the tens of millions year after year, and one has occupied the prime suite at Claridges for the past six months. No, there always needs to be just one more thing that can be ‘owned’ and brought under control, so as to satisfy the false agrandissement that is part and parcel of an endless, and ultimately fruitless, attempt to become omnipotent and untouchable by ordinary mortals.

Such is the aphrodisiac called ‘power’.

Time and again, those who suffer most from a sense of being inwardly dispossessed are the very  ones to seek, as compensation, the maximum level of outer possessiveness. And this is the mechanism whereby the wrong people get to be in charge.

Ironically, many who do not suffer such delusional power urges are quite happy to just tick along fulfilling their aspirations and daily needs as best they can. Yet in doing so, they unwittingly allow the magalomaniacs a direct route to the seats of power.

Those who are secure enough in themselves to take a responsible attitude towards the life around them seldom come forward to take-on positions of authority and civil responsibility. Their preference is to leave it to others – and in too many cases these ‘others’ often harbour barely disguised ulterior motives.

Where do you belong in this mad scrum?

The wrong people are in charge and the right people don’t want to bother themselves unduly to do anything about it. That just about sums-up the dire state of our post industrial ‘civilisation’. Something has to give…

The question is what?

Will a critical mass of the 99% finally act to bring back some genuine self autonomy through wresting control from the 1%?

Or will the 1% finally complete their annihilation job, trashing our planetary assets and crushing our human propensities once and for all? That is the question.

But none of us are free to sit back and play at second guessing the outcome. We are all in there. We are part of the pack. Our every move, whether we see it or not, is either promoting or resisting the despot’s master plan. There is no such thing as being ‘in between’ in this game. The fence you once sat on is broken. The wires are hanging limp. There is no no-man’s-land left to hide in.

Forget about Divine intervention. There will be no Divine intervention unless and until there is a very visible human determination already out of the starting blocks and heading for the finishing line. Only then is it possible that higher energies will join the race to bring justice back to this battered World.

We are approaching the point of no return. If we don’t respond to the myriad calls for help that are echoing around this World at an ever-increased velocity each day, then we will be condemning ourselves – and those who call upon us – to being forever stranded upon a desolate and barren shore.

That help starts with helping each other to break free from our learned and self-induced state of fear and pacifism. A combination that pretty much guarantees an unwillingness to act. An unwillingness to act even when presented with the choice of participating in a mass genocide or opposing it.

This unwillingness is giving voice to the notion that ‘no action’ is the spiritual choice of the knowing. That to retire into a cul-de-sac of meditation and inward-looking self examination can ‘change the world’ by dint of a shifted value focus. Can serve to hermetically seal the self away from the trials and tribulations of the outer world and thereby help avoid any confrontation with that which demands a full and spontaneous response.

Confrontation, in this view, is a negative, reactionary manifestation that undermines ‘peace’ and the supposed tranquility of a chimeric world, which takes over from rational observations and becomes the new reality. A ‘virtual reality’.

This is a deeply flawed and dangerous ethos. For it splits in half that which is whole and sets the two halves in opposition to each other.

We are ‘of nature’ not above or outside it. We go forth and we return. That is the Tao. Universal forces all dance to this tune. Breath, ocean waves, cycles of birth and death, growth and decay, all is in motion and at rest, all the time. There is no contradiction.

Outward action and inward contemplation are two halves of one whole. They are synonymous. One should move between the two constantly and joyously.

Well, injustice has become law – yet resistance remains doggedly muted, and the search for an escape route remains the preferred option.

Cultivate spirit, wisdom and deep awareness – yes. Yet not as an alternative to toppling our oppressors from their corporate thrones, but as part of it.

Don’t be fooled. There is a war on. We are all called to the front. Just as the white corpuscles of our bodies are fighting off attempts by the pathogens to take hold – all the time. We should be doing the same – all the time.

Everyday we should be conjuring-up and putting into affect actions to end the draconian government/corporate dictatorship that continues to herd great swathes of humanity ever faster towards a sheer and genocidal cliff.

We can have no ‘peace’ until the criminals at the master control consulate are ejected from their padded leather chairs and are forced to confront the true price of their obscene power games.

Peace and enlightenment, at the individual level, are only possible if we are engaged in this battle. The battle to rid both ourselves and this planet of that which seeks to dominate and destroy the true well-spring of life.

The road to victory also requires the wise and aware to form a council of responsible oversight to step-in to the void once the despots are dethroned. That is an essential ingredient of any uprising determined to manifest genuine justice.

The lessons of history teach that fickle rebellion simply replaces one bunch of power predators with another. That is no longer an option; we are now at the point of no return. This time we have to get it right.

Footnote: some may see this as being at odds with my essay “Reverse Engineering the Illuminati Mind Set,”I don’t believe it is. The action I speak of here does not eclipse the need to draw deeply upon compassion. However, to exercise compassion one needs to be in a position of strength, not slavery.

Julian is a committed international activist, writer, farmer and actor. He is an early pioneer of UK organic farming methods and is currently involved in the front line of efforts to keep Poland free from genetically modified organisms. Julian is President of The International Coalition to Protect the Polish Countryside. His book Changing Course for Life can be purchased on www.changingcourseforlife.info. His latest book In Defence of Life – a Radical Reworking of Green Wisdom is available at Amazon or can be requested on http://www.julianrose.info/

We have 858 guests and no members online