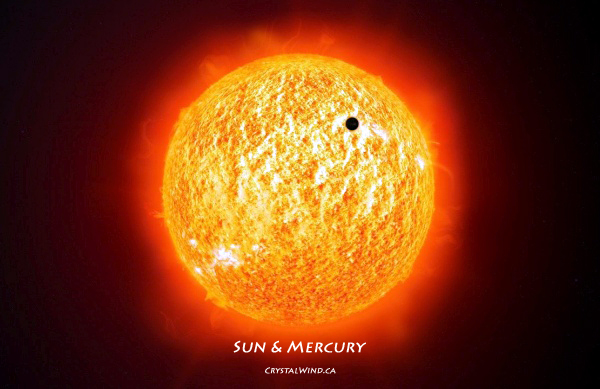 At 8:39 pm PST November 28, we will experience the "Superior Conjunction" as Mercury catches up with and passes the Sun at 8 Sagittarius. This marks a major turning point where past and future separate, putting the focus on how we can now move forward by going deeper and noting the powerful inner changes going on within us.”

This ends the period of the last Superior Conjunction theme of 10 Leo associated with transfiguration and knowing “we’ve made it through the night.” We now move forward with the theme of 8 Sagittarius wherever this conjunction falls in our chart. As the Sun represents Life and Mercury represents Mind, this Superior Conjunction marks a fusion of Life and Mind moving forward fulfilling the sector of emotional and/or social abstraction.

The Fusion of Life and Mind Works Two Ways

The Superior and Inferior Conjunctions are important points in the dance Mercury and the Sun do each year. They are points when Life and Mind “come together,” one time looking forward, one time looking back. Though you may have read some of this before, the next part can refresh your understanding of the differences between the Inferior and Superior Conjunctions of Mercury with the Sun.

Mercury conjuncts the Sun two different ways. When Mercury is direct in motion, it's called the Superior Conjunction. When Mercury is retrograde, it's called the Inferior Conjunction. These conjunctions of the Sun and Mercury are important points showing how our life and mind are fusing past and present to vitalize the future. Each represents a “hot spot” in how our life and mind relate to each other.

Mercury symbolizes our mind, eternally racing forward and then looking backward at where it’s been. The Sun symbolizes our life-in-the-making, illuminating the integrity of the moment. It holds a steady pace while all the other planets move in their orbits. When the Sun and Mercury conjunct, it allows the mind to evaluate and process past, present, and future life experiences from “a new light.”

Mercury's direct motion period is when it directly learns, evaluates, classifies, divides, and generally dissects reality. The mind (Mercury) races ahead of the life (Sun) and gets as far ahead as it can before it begins to slow and turn inward, look backward, listen to other beats, other drummers, other interpretations, other ways of weaving the experiences of life from a different point of view. This is how we gain perspective and understand how our life experiences require illuminating them from multiple angles. While our direct experiences bring us one angle of understanding, a retrograde can give us an entirely different perspective on what we’re learning and how to apply it.

By understanding the process of Mercury speeding up and slowing down, we can understand how to navigate the fluxes and flow of our life experience. By knowing the timing appropriate to the moment, we can learn what to do and when by taking advantage of these never-ending periods of life.

I explain a lot more about Inferior and Superior Conjunctions, and how the mind operates when racing forward and looking backward, in my book A New Look at Mercury Retrograde. There's a lot of material on Mercury Retrograde in the signs, houses, what it means for each sign, when it happens, and Mercury Retrograde celebrities and historical events you'll never find in any other single source.

Here's the Amazon link to order your paperback edition of A New Look at Mercury Retrograde. (Just make sure you get the most recent 2nd edition and not the ancient 1st edition.) You can also find a Kindle ebook there, or go to Barnes & Noble’s Nook. In the book you will find countless possible ways Mercury operates in its retrograde and direct motion, along with insights about the value of retrograde periods to take time to reflect, review, reconsider, rehearse, or see things from different angles.

What follows elaborates on how this “fusion of life and mind” at the current Superior Conjunction at 8 Sagittarius will generally play out for all of us over the next 4 months. In part 2, we’ll go into greater depth about the specific qualities of this particular Superior Conjunction.

Mercury Retrograde and the Superior and Inferior Conjunction

The Superior Conjunction is when Mercury catches up to the Sun, and brings insights from the past to our Life/Light symbolized by the Sun. That’s what’s happening now. These are coordinated Mercurial messages which have come since the last retrograde period, and Mercury (Mind) now can weave them into our life understanding to be used by the Sun (Life) as Mercury again moves ahead of the Sun and our mind again outraces our Life.

The Inferior Conjunction (the last one was at 17 Libra on October 9) brings insights from the past, or subconscious imagery from earlier times, to the life and vitality symbolized by the Sun. They can be reflections leading to new insights about past or present life coordination issues, or signs and signals, messages or symbols from the personal or collective subconscious, and/or they could be new or alternative insights about some part of the life experience, also symbolized by the Sun.

After the retrograde period Mercury goes stationary direct. It then takes all it learned from the two previous transits of its retrograde span and puts it all together for its third transit of that span, known as the “shadow zone.” So it gets one take when direct about to go retrograde. It gets a second take when retrograde in the same span of degrees. Then in the third phase it coordinates the two previous perspectives on that span of experience in its third experience of that span of degrees.

When Mercury is direct it speeds up until it again catches the Sun at some point, bringing mind into another direct connection to our life, symbolized by the Sun. That’s been going on since the last Mercury retrograde period in September and October 2021. After every retrograde period Mercury again conjuncts the Sun one or two signs later, and about four months after its previous retrograde station it again goes retrograde, preparing for another Inferior Conjunction when it again delivers all it has learned since the last Superior Conjunction.

The Sun Lights Up the Stage of our Life

The Sun is the Law of our Light-Life, the Central Order of our personal Solar System of our material, emotional, and psychological affairs. All conjunctions to our Sun are important fusions of parts of our life, affecting the era to come, whose length is determined by the particular planetary cycle engaging our Sun.

The experience we get through Mercury retrogrades gives us perspective allowing us to become well rounded in our knowledge and ability to apply our knowledge, skills, and talents in ways which fulfill our purpose on this Earth. It is said that Mercury, or Hermes, is the "Guide of Souls." If that is true, then perhaps looking back with a different perspective may help us to reconsider our footprints in time, and choose to re-think some of our assumptions which are not leading us to our Higher Self. Then during Mercury’s direct periods we can consciously choose a different way to coordinate our mind, feelings, and lives, and begin to live a more fulfilled sense of purpose.

Mercury retrograde periods are an extremely important period of getting signals that can lead you to your Soul. Take an unusual view, look back with a new perspective, see the patterns, both productive and destructive, and then when it goes direct, implement your new insights and perspectives into new ways of seeing, communicating, and envisioning.

At this Superior Conjunction at 8 Sagittarius, we will have “a fusion of life and mind” which will help set a platform where in blending these principles we will see a shift in our affairs, attitudes, and understanding about those things symbolized by Mercury in Sagittarius. Natal points in harmony with 8 Sagittarius will see productivity, understanding, stabilization, and unique qualities come forth. Natal points in friction with 8 Sagittarius will see turning points, blocks, braking action, and dynamic releases of potential.

In the next article in this series, we will explore the specifics of this November 28 Hanukkah Superior Conjunction in Sagittarius, and what its lessons hold for us over the next several months.