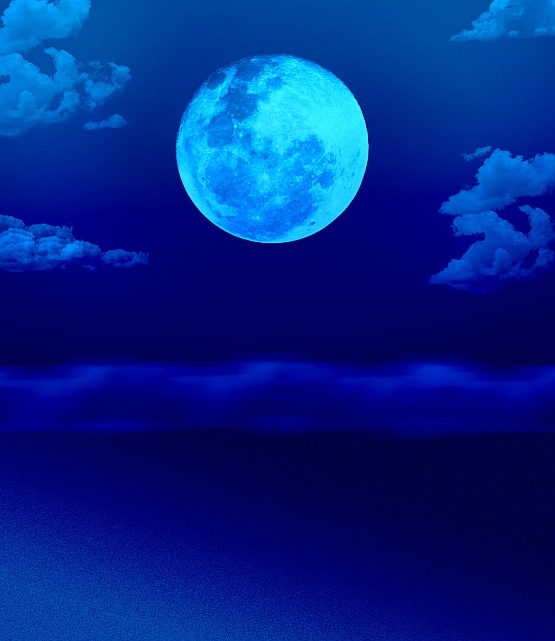 Although blue moons aren’t necessarily blue, they are rare and happen on average once every 2.7 years.

Folklore has defined two different kinds of Blue Moons. A Blue Moon can be the second full moon in a month. Or it can be the third of four full moons in a season.

This rarity in the sky has been the basis of myths, legends, and superstitions throughout the world for centuries. Here a story and superstitions I have picked up or heard tell of in my travels as a spiritual advisor and reader.

There is an old Eskimo legend. In the tale, the Sun is a woman, draped in golden light. She is optimistic and creative and warms the earth with her powerful glow. She brings life to the earth and is loved and revered by many stars and planets in the sky.

The moon was a man, passionate, dark, and handsome. He hid in the shadows admiring the sun from a distance. It was a time when the moon had no light, but just watched and waited in dark shadows of sky and worshiped the sun from afar.

Then one day as lady Sun was putting on a brilliant set of morning clothes, she felt she was being watched. She looked around and noticed the handsome moon starring at her from a deep corner of space.

“I’m overwhelmed by your beauty and you leave me speechless so I can only watch you from a distance, because if I touched you I would surely die of ecstasy.”

The Sun went closer to the moon and said, “You will not die if you touched me, come closer and kiss me.”

The Moon went to her and kissed her fiery lips that morning and the fire was so strong it left him glowing all day and into the night. And every morning she would kiss him again and he would rise up glowing so brightly he lit up and the light filled his whole being and the night sky was full of light.

Then one day the Sun came out and said he would not receive a kiss from her that morning because he was becoming too bright, and the people on earth would have two Suns instead of one and it would break the natural course of things. “But I will kiss you and love you as much as I can, just not every day.”

The Moon was sad to miss the morning kiss and in his sadness he began to grow cold and dark again. But he did not become black as the night as he once was. The hope and anticipation of being with the sun once more kept a few embers glowing leaving the moon to look as if he had put on a blue cloak.

And so is the legend of the blue moon.

The blue moon has sparked the imagination of many cultures.

Wisdom of the Council: Creators of Reality

VLOG 229: Preparing For The Divine Mission At Hand

Council of Overseers: Fulfillment And Parallel Worlds Joined As One

The End of the Coronavirus

We have 1928 guests and no members online