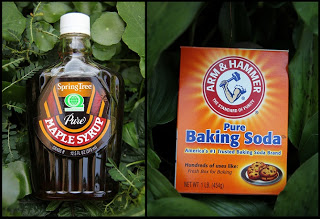 I had always wondered, since most people's health problems are partly owing to being too acidic, if it would be a good idea to take baking soda, since it is so alkaline. Well, it turns out that there is a story to that, whereby simple baking soda and maple syrup cooked gently together were said to stop and even heal cancer.

“There is not a tumor on God’s green earth that cannot be licked with a little baking soda and maple syrup.” That is the astonishing claim of controversial folk healer Jim Kelmun who says that this simple home remedy can stop and reverse the deadly growth of cancers. His loyal patients swear by the man they fondly call Dr. Jim and say he is a miracle worker. “Dr. Jim cured me of lung cancer,” said farmer Ian Roadhouse. “Those other doctors told me that I was a goner and had less then six months to live. But the doc put me on his mixture and in a couple of months the cancer was gone. It did not even show up on the x-rays.”

Dr. Jim discovered this treatment accidentally somewhere in the middle of the last century when he was treating a family plagued by breast cancer. There were five sisters in the family and four of them had died of breast cancer. He asked the remaining sister if there was anything different in her diet and she told him that she was partial to sipping maple syrup and baking soda.

Since then, reported by a newspaper in Ashville, North Carolina, Dr. Jim dispensed this remedy to over 200 people diagnosed with terminal cancer and amazingly he claims of that number 185 lived at least 15 more years and nearly half enjoyed a complete remission of their disease. When combined with other safe and effective treatments like transdermal magnesium therapy, iodine, vitamin C, probiotics and other items like plenty of good sun exposure, pure water and clay treatments we should expect even higher remission rates.

It is important not to use baking soda which has had aluminum added to it. The Cancer Tutor site reports that Arm and Hammer does have aluminum but the company insists that is not true. One can buy a product which specifically states it does not include aluminum or other chemicals. (e.g. Bob's Red Mill, Aluminum-Free, Baking Soda). Sodium bicarbonate is safe and extremely inexpensive.

My husband and I take a teaspoon of this daily, every now and again. The key to heating it is to put it on a super, super low temperature. Once the maple syrup is burned, it tastes TERRIBLE. But if you keep it just warm enough to fizz and mix for five minutes, so the two substances get combined, then it tastes quite pleasant. This sure can't hurt. 100% pure maple syrup is also very good for you

The nice thing about this remedy, is that you can do it at the same time as anything else you are doing.

Mix 3 parts organic maple syrup with 1 part Aluminum free baking soda ( Red Mill Brand) stir with low heat (not over 120 degrees) for 5-10 minutes and take 3 tsp per day for 1 to 2 months. If it tastes terrible, you burned it, which is easy to do. Change diet to no meat and especially no sugar!! and no white flour.

We have 2110 guests and no members online