Numerous Studies Show how Apples Can Prevent Cancer, Defeat Cancerous Tumors
A+ A A- 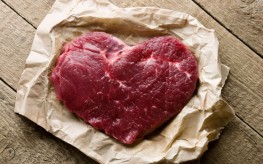 According to Harvard Medical School, cutting out or reducing red meat consumption can help prolong your life by up to 20%. The study, published in the Archives of Internal Medicine, looked at 84,000 women and 38,000 men’s diets in order to determine if it was really beneficial to consume a big juicy steak several times a week. The study found, unequivocally, that people who ate the most red meat (especially processed red meats) died younger, and most often from cardiovascular diseases and cancer.

“We estimated that substitutions of 1 serving per day of other foods (including fish, poultry, nuts, legumes, low-fat dairy, and whole grains) for 1 serving per day of red meat were associated with a 7% to 19% lower mortality risk. We also estimated that 9.3% of deaths in men and 7.6% in women in these cohorts could be prevented at the end of follow-up if all the individuals consumed fewer than 0.5 servings per day (approximately 42 g/d) of red meat.”

Even though people who consumed high levels of red meat also tended to smoke, drink, and have less-than-healthy body weights, those factors were calculated into the study, and people who ate more red meat still died sooner than their more vegetarian counterparts. The study concluded that each daily serving of red meat increased risk of death by 13%. The impact rose to 20% if the serving was processed, as in food items like hot dogs, bacon, and cold cuts.

“This study provides clear evidence that regular consumption of red meat, especially processed meat, contributes substantially to premature death,” according to Dr. Frank Hu, one of the senior scientists involved in the study and a professor of nutrition at the Harvard School of Public Health.

Dr. Walter Willet, a senior scientists on the study said:

The good news is that you don’t have to go completely meat free, though. You can substitute other proteins that the body can more easily assimilate and digest. Fish resulted in a 7% decrease in risk, beans and legumes resulted in a 10% decrease in risk, chicken and whole grains resulted in a 14% reduction, and nuts as a source of protein offered a whopping 19% reduction in cardiovascular and cancer risks compared to red meat consumption. The study did not measure sprouted beans or other sprouted seeds that often have up to 900% more nutritional value for the body as well.

Furthermore, many farm-raised animals which supply meat are fed on GMO diets, which can cause cancer, organ failure and other unsavory health concerns.

The study was funded by grants from the NIH and by a career development award from the National Heart, Lung, and Blood Institute. The study authors reported that they had no conflicts of interest.

Christina Sarich is a musician, yogi, humanitarian and freelance writer who channels many hours of studying Lao Tzu, Paramahansa Yogananda, Rob Brezny,  Miles Davis, and Tom Robbins into interesting tidbits to help you Wake up Your Sleepy Little Head, and See the Big Picture. Her blog is Yoga for the New World. Her latest book is Pharma Sutra: Healing the Body And Mind Through the Art of Yoga

We have 1245 guests and no members online