Fantastic Food
A+ A A- 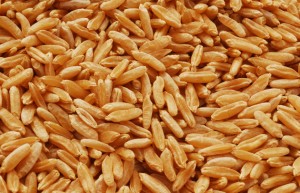 There’s no doubt about it – modern wheat is quickly becoming the new high-fructose corn syrup and a menace to wellness. Gluten found in modern wheat has been linked to rheumatoid arthritis, headaches, ADHD, psoriasis, poor gut health, depression, and multiple sclerosis, and is not tolerated by people with celiac disease, irritable bowel syndrome and wheat allergy. Some also attribute many other adverse health effects to modern wheat, such as “neurological impairment, dementia, heart disease, cataracts, diabetes, arthritis and visceral fat accumulation,” in addition to a full range of intolerances.

Wheat has changed incredibly since the first cultivated varieties from 10,000 years ago. During the post-WWII Green revolution, the Western world, with the goal of increasing agricultural output, widely hybridized wheat grains and started using synthetic fertilizers and pesticides to resist disease and to boost agricultural output. As a result, wheat has turned into a nameless mono-crop.

“The majority of wheat is processed into 60% extraction, bleached white flour. 60% extraction–the standard for most wheat products means that 40% of the original wheat grain is removed. So not only do we have an unhealthier, modified, and hybridized strain of wheat, we also remove and further degrade its nutritional value by processing it. Unfortunately, the 40% that gets removed includes the bran and the germ of the wheat grain–its most nutrient-rich parts. In the process of making 60% extraction flour, over half of the vitamin B1, B2, B3, E, folic acid, calcium, phosphorus, zinc, copper, iron, and fiber are lost.” [Natasha Longo]

Ancient varieties of wheat still exist, and more people are starting to pay attention to the potential these grains hold for the gluten-sensitive and gluten-intolerant individuals, in addition to offering a healthier option for everyone who enjoys pastas and breads. For example, “a diploid species with 14 chromosomes, einkorn has a different gluten structure than modern wheat (which has 42 chromosomes) and is easier to digest.” (Source) Einkorn (Triticum monococcum) is the oldest and most primitive cultivated wheat, and, based on recent laboratory testing, T. monococcum gliadin (gluten) doesn’t have the same effect as regular bread gliadin and hence may be a possible alternative for the gluten intolerant.

Organizations such as the Heritage Grain Conservancy and Community Grains work to collect and protect almost-extinct varieties of ancient grains, such as einkorn, and are helping to establish a new grain economy for local and organic farmers. Below is a short video with Eli Rogosa, the director of the Heritage Wheat Conservancy, discussing her efforts at the University of Massachusetts at Amherst to preserve ancient wheats from extinction.

In addition to einkorn, other heritage wheat varieties include red fife (Triticum aestivum), kamut (Triticum turanicum) and many others (for example, see this list of Canadian heritage wheat varieties here:http://en.wikipedia.org/wiki/List_of_Canadian_heritage_wheat_varieties) Although only about 1 percent of the wheat grown in North America goes by an actual name, they are now more readily available to the public:

“Even home gardeners are planting wheat, in backyards measured in square feet rather than in acres. They are harvesting it by hand, threshing it by flailing chains inside plastic buckets, separating the chaff from the berries (or kernels) with vacuum cleaners and then grinding it themselves on hand-cranked mills.”  (smithsonianmag.com)

If you are considering growing your own wheat, or start first by buying your own heritage wheat grain, also called wheat berries, you may also want to understand the milling process. Some will argue that freshly milled flour has much more flavor. Others claim that whole-grain milling, without separating the germ, bran and endosperm, offers more nutrition than typical wheat flour. Even flour labeled “whole wheat” may be just white flour recombined with bran and germ, as the FDA only loosely regulates this process.

“A seed is a miracle, and when you take apart a wheat berry, it seems to kill it.” -Craig Ponsford, founder of Artisan Bakers in Sonoma

Home mills can be found in many varieties: from hand grain mills, to a wide range of electric grain mills, to high-quality industrial-strength mills. If you start growing and buying whole wheat berries, consider that most wheat grain varieties will last up to a year if stored properly. Here’s a great resource with details about storing all types of whole grains: http://wholegrainscouncil.org/recipes/storing-whole-grains

Organic, Inc.: Natural Foods and How They Grew by Samuel Fromartz

Gluten Is My Bitch: Rants, Recipes, and Ridiculousness for the Gluten-Free by April Peveteaux

Alex Pietrowski is an artist and writer concerned with preserving good health and the basic freedom to enjoy a healthy lifestyle. He is a staff writer for WakingTimes.com and an avid student of Yoga and life.

Disclaimer: This article is not intended to provide medical advice, diagnosis or treatment. Views expressed here do not necessarily reflect those of WakingTimes or its staff.

Now You Get To Choose
Become a Patron!

We have 2719 guests and no members online