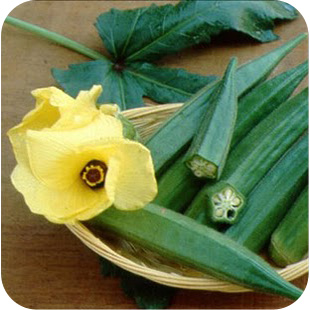 Okra traces its origin from what was known as Abyssinia (Ethiopia) spreading right through to Eastern Mediterranean, India, Africa, North America, South America and the Caribbean. Though long popular in the South, it is becoming increasingly common and well known in Western Countries.

Okra is a tall-growing (3 to 6 feet or more in height), warm-season, annual vegetable from the same family as hollyhock, rose of Sharon and hibiscus. The immature pods are used for soups, canning and stews or as a fried or boiled vegetable. The hibiscus like flowers and upright plant is very pretty.

When cut, okra releases a sticky substance with thickening properties, useful for soups and stews.

1. The superior fiber found in okra helps to stabilize blood sugar by curbing the rate at which sugar is absorbed from the intestinal tract.

2. Okra's mucilage binds cholesterol and bile acid carrying toxins dumped into it by the filtering liver.

3. Okra helps lubricate the large intestines due to its bulk laxative qualities. The okra fiber absorbs water and ensures bulk in stools. This helps prevent and improve constipation. Unlike harsh wheat bran, which can irritate or injure the intestinal tract, okra's mucilage soothes, and okra facilitates elimination more comfortably by its slippery characteristic. Okra binds excess cholesterol and toxins (in bile acids). These, if not evacuated, will cause numerous health problems. Okra also assures easy passage out of waste from the body. Okra is completely non-toxic, non-habit forming, has no adverse side effects, is full of nutrients, and is economically within reach of most unlike the OTC drugs.

4. Okra fiber is excellent for feeding the good bacteria (probiotics). This contributes to the health of the intestinal tract.

5. Okra is a supreme vegetable for those feeling weak, exhausted, and suffering from depression.

6. Okra is used for healing ulcers and to keep joints limber. It helps to neutralize acids, being very alkaline, and provides a temporary protective coating for the digestive tract.

8. In India, okra has been used successfully in experimental blood plasma replacements.

To retain most of okra's nutrients and self-digesting enzymes, it should be cooked as little as possible, e.g. with low heat or lightly steamed. Some eat it raw. 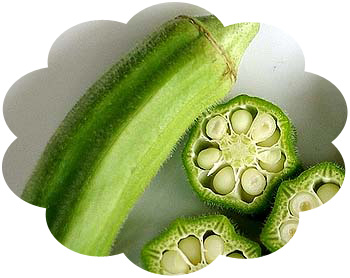 A person, suffering from constipation for the past 20 years and recently from acid reflux, started eating 6 pieces of Okra. Since then, has not taken any other medication. Now, his blood sugar has dropped from 135 to 98 and his cholesterol and acid reflux are also under control.

Vitamin C is a powerful antioxidant and anti-inflammatory. This anti-inflammatory activity may curtail the development of asthma symptoms. A large preliminary study has shown that young children with asthma experience significantly less wheezing if they eat a diet high in fruits rich in vitamin C. 1/2 cup of cooked Okra contains over 13 mg of vitamin C.

Diets high in insoluble fiber, such as those containing okra, are associated with protection against heart disease in both men and women.

The insoluble fiber found in Okra helps to keep the intestinal tract healthy, decreasing the risk of some forms of cancer, especially colo-rectal cancer.

Eating plenty of flavonoid and vitamin C-rich fruits and vegetables such as okra helps to support the structure of capillaries.

1/2 cup of cooked okra contains 460 IU of vitamin A. Some studies have reported that eating more foods rich in beta-carotene or vitamin A was associated with a lower risk of cataracts.

A study (JAMA July 23, 2003) showed that consuming a "dietary portfolio" of vegetarian foods lowered cholesterol nearly as well as the prescription drug lovastatin (Mevacor). The diet was rich in soluble fiber from oats, barley, psyllium, eggplant and okra. It used soy substitutes instead of meat and milk and included almonds and cholesterol-lowering margarine (such as Take Control) every day.

Depression and Lack of Energy

Okra is a supreme vegetable for those feeling weak, exhausted, and suffering from depression.

In one survey, researchers gathered information from nearly 400 people (half with MS) over three years. They found that consumption of vegetable protein, fruit juice, and foods rich in vitamin C, thiamine, riboflavin, calcium, and potassium correlated with a decreased MS risk. 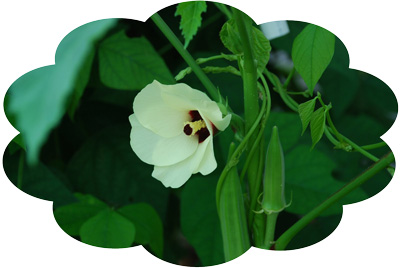 We have 1683 guests and no members online