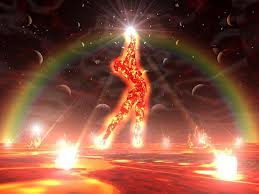 After responding to a comment to my last post I was struck by several insights that clarify the ascension process and will share them here. But first a section of my response to that comment:

“History repeats itself over and over even on the largest cycles and IMHO we are seeing a repeat of the creation cycle and the fall of the highest angels at a higher octave. While this is a fall out of pride and of not wanting/rejecting the “Garden of Eden” that is being collectively created; it is also part of the divine plan. All those negative elements that have been purged from the new Gaia need somewhere to go and these “Warriors of Light” have chosen to continue doing battle with them rather than integrate them. In engaging and fighting them a sphere is created and a place for them to exist. Channels have called this place Planet B. To engage the enemy is to give it power and strength.

For the first time we see the cycle in clarity. Outward expansion; inward collapse; then a quantum leap to a new existence that includes the unity of both forces. After the creation of atomic is elements a final point is reached where molecules start to form. After molecules reach the final limit the return collapse causes planets and solar system to form. As planets and solar systems reach the final limit DNA strands and life comes into existence. As living cells come into existence the division into male and female occurs.

Each of these quantum leaps represents a MPR (magnetic pole reversal of outward to inward polarity; from expansive to manifesting.) Mother earth/Gaia has reached a point of maximum compression/return to source and is at the cusp of a quantum leap that integrates both outward expansion and inward manifestation just as north pole magnetic vortexes combine with south pole magnetic vortexes to create a rotating sphere of energy; create an atom.

Yet in each case described the unification of the third stage only leads to expansion of the newly unified creation and at some point in the far future requires the inward movement once more.

On the new Gaia there is now a unity of male and female energies that is in the process of manifesting. For the first time we see the male and the female that exists in each one of us regardless of the sex of our physical body. This is a unification, but the separation of male and female still exists on the biological level. So the quantum leap for humanity is to become a place of equality for both sexes. But that still leaves the differences between humanity and other life forms. We will see humanity unite; but become more isolated from other life forms.

Actually humanity is in the process of dividing into new humans and new elves. The new humans seeking the purity of the human race and spiritual beings with the elves seeking the integration with all living things upon earth; north pole aspects and south pole aspects; cycles within cycles.

There is really no question about Gaia and her inhabitants experiencing a quantum leap. The question is how huge is this MPR? Is it planetary, solar, galactic or embracing the cosmos and entire universe? Then we might ask when?

We have 1570 guests and no members online