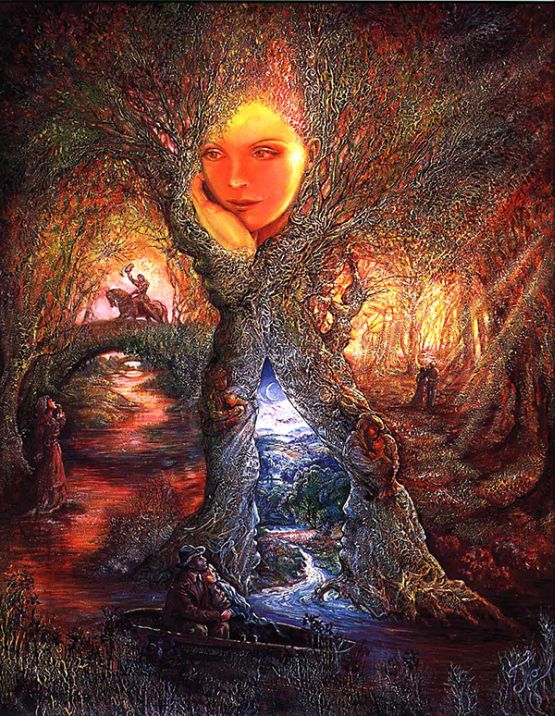 Simple ways to celebrate the feast-days of the Celtic Year.

The Return of the Sun

Beltaine is an anglicization of the Irish "Bealtaine" or the Scottish "Bealtuinn." While "tene" clearly means "fire," nobody really knows whether Bel refers to Belenus, a pastoral god of the Gauls, or is from "bel," simply meaning "brilliant." It might even derive from "bil tene" or "lucky fire" because to jump between two Beltane fires was sure to bring good fortune, health to your livestock, and prosperity.

When the Druids and their successors raised the Beltaine fires on hilltops throughout the British Isles on May Eve, they were performing a real act of magic, for the fires were lit in order to bring the sun’s light down to earth. In Scotland, every fire in the household was extinguished, and the great fires were lit from the need-fire which was kindled by 3 times 3 men using wood from the nine sacred trees. When the wood burst into flames, it proclaimed the triumph of the light over the dark half of the year.

Then the whole hillside came alive as people thrust brands into the newly roaring flames and whirled them about their heads in imitation of the circling of the sun. If any man there was planning a long journey or dangerous undertaking, he leaped backwards and forwards three times through the fire for luck. As the fire sunk low, the girls jumped across it to procure good husbands; pregnant women stepped through it to ensure an easy birth, and children were also carried across the smoldering ashes. When the fire died down, the embers were thrown among the sprouting crops to protect them, while each household carried some back to kindle a new fire in their hearth. When the sun rose that dawn, those who had stayed up to watch it might see it whirl three times upon the horizon before leaping up in all its summer glory.

The Rites of Spring

Beltaine was a time of fertility and unbridled merrymaking, when young and old would spend the night making love in the Greenwood. In the morning, they would return to the village bearing huge budding boughs of hawthorn (the may-tree) and other spring flowers with which to bedeck themselves, their families, and their houses. They would process back home, stopping at each house to leave flowers, and enjoy the best of food and drink that the home had to offer. In every village, the maypole—usually a birch or ash pole—was raised, and dancing and feasting began. Festivities were led by the May Queen and her consort, the King who was sometimes Jack-in-the-Green, or the Green Man, the old god of the wildwood. They were borne in state through the village in a cart covered with flowers and enthroned in a leafy arbor as the divine couple whose unity symbolized the sacred marriage of earth and sun.

We have 1323 guests and no members online