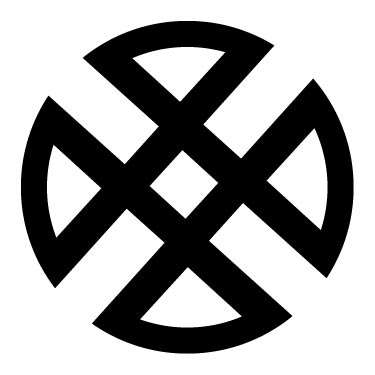 Celtic shield knots can be identified as any of the Celtic knots with for distinct corner areas. They usually resemble a square but sometimes they are a square shaped emblem within a circle. As in all Celtic knots there is no beginning or end. The Celtic shield knot idea comes from civilizations more ancient than the Celts. Anciently, it was a universally known symbol for protection from danger and warding off evil spirits. The symbol is always fourfold based, but within a greater unity.

The Mesopotamians used a similar four cornered symbol in casting protective spells and for invoking the gods of the four corners of the Earth. The 4 cornered symbols stood for the four creator gods. The sky god An was the greatest of these gods. Anki was the Sumerian word for universe. An meant heaven. Enlil was the next greatest god and could produce raging storms in a fit or help man when calm. He was known as the shepherd to the people and also as the god of air. "lil" stood for wind in the Sumerian language. The earth goddess was Nin-khursag (or Nintu). The fourth god was Enki, the god of water and patron of wisdom. Sumerians believed Heaven and Earth were united as a single mountain. Nammu, goddess of the primeval sea, gave birth to An (Heaven) and Ki (Earth). An and Ki gave birth to their son Enlil (god of the Air). Enlil then carried away his mother, the Earth, from Heaven. In essence these four gods represented sky, fire, earth and water. It is possible that Celtic shield knots represent these same substances.

The ancient Norse, who eventually formed the Celts, had a similar shield symbol. Their four cornered symbol, which was also for protection, was related to the solar cross. The solar cross is one of the most ancient spiritual symbols in the world. It is simply a cross with equal size arms, inside of a circle and touching the sides of the circle, which forms four open spaces. To the Norse it was known as Odin's cross, their chief god. The solar cross represents the movements of the sun as in the solstices (the four seasons). Asatruar people (pagan Norse) use the solar cross as their religious emblem. 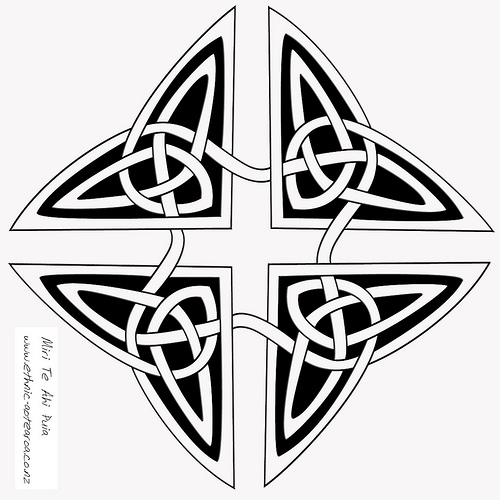 Occultists who us a Kabbalah (the mystic aspect of Judaism) based system of ceremonial magic invoke the four main archangels as mentioned in Judaism (Michael, Gabriel, Raphael and Uriel) as guardians. They are to guard the four quarters (as seen in a solar cross), or directions. They each have corresponding colors associated with magical properties. As well they display spiritual activity over each season: Spring is Raphael, summer is Uriel, fall is Michael and winter is Gabriel. For these occultists, the solar cross or shield knot symbol stands for this.

Christianity, in the Scandinavian area, eventually took the pagan symbol of the solar cross or the shield knot and termed it St. Han's cross (or St. John's cross, after John the Baptist). It came to symbolize flowing water and the continuity of life, similar to the infinity symbol. Christianity is known for changing the meaning of many formerly pagan symbols, as it spread. In Northern Europe, even today, the shield knot symbol is used to symbolize national heritage sites. In heraldry the same knot symbol is known as a Bowen cross.

So we can tell that the original Celtic shield knot symbol is indicative of the four seasons or earth water, fire and sky (which help us, but have power over us). It can also mean the four gods, intertwined with the seasons, or archangels, who protect the people of earth as well as bring us the elements or seasons.

Mark Jordan is a researcher and freelance writer living near Harrisburg Pennsylvania.