Celtic Samhain
A+ A A- 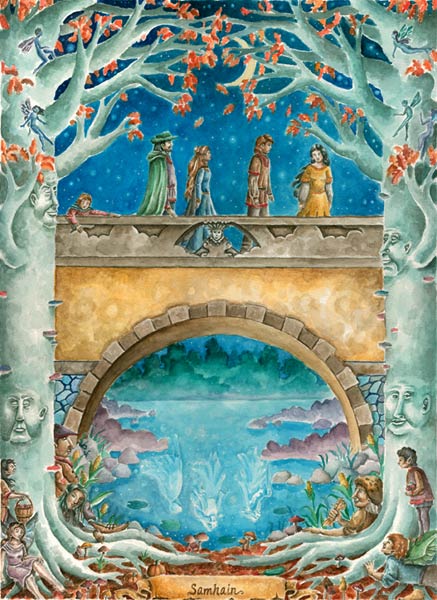 Samhain marks one of the two great doorways of the Celtic year, for the Celts divided the year into two seasons: the light and the dark, at Beltane on May 1st and Samhain on November 1st. Some believe that Samhain was the more important festival, marking the beginning of a whole new cycle, just as the Celtic day began at night. For it was understood that in dark silence comes whisperings of new beginnings, the stirring of the seed below the ground. Whereas Beltane welcomes in the summer with joyous celebrations at dawn, the most magically potent time of this festival is November Eve, the night of October 31st, known today of course, as Halloween.

Samhain (Scots Gaelic: Samhuinn) literally means “summer's end.” In Scotland and Ireland, Halloween is known as Oï¿½che Shamhna, while in Wales it is Nos Calan Gaeaf, the eve of the winter's calend, or first. With the rise of Christianity, Samhain was changed to Hallowmas, or All Saints' Day, to commemorate the souls of the blessed dead who had been canonized that year, so the night before became popularly known as Halloween, All Hallows Eve, or Hollantide. November 2nd became All Souls Day, when prayers were to be offered to the souls of all who the departed and those who were waiting in Purgatory for entry into Heaven. Throughout the centuries, pagan and Christian beliefs intertwine in a gallimaufry of celebrations from Oct 31st through November 5th, all of which appear both to challenge the ascendancy of the dark and to revel in its mystery.

In the country year, Samhain marked the first day of winter, when the herders led the cattle and sheep down from their summer hillside pastures to the shelter of stable and byre. The hay that would feed them during the winter must be stored in sturdy thatched ricks, tied down securely against storms. Those destined for the table were slaughtered, after being ritually devoted to the gods in pagan times. All the harvest must be gathered in -- barley, oats, wheat, turnips, and apples -- for come November, the faeries would blast every growing plant with their breath, blighting any nuts and berries remaining on the hedgerows. Peat and wood for winter fires were stacked high by the hearth. It was a joyous time of family reunion, when all members of the household worked together baking, salting meat, and making preserves for the winter feasts to come. The endless horizons of summer gave way to a warm, dim and often smoky room; the symphony of summer sounds was replaced by a counterpoint of voices, young and old, human and animal. 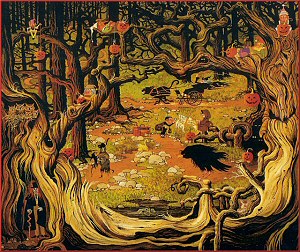 In early Ireland, people gathered at the ritual centers of the tribes, for Samhain was the principal calendar feast of the year. The greatest assembly was the 'Feast of Tara,' focusing on the royal seat of the High King as the heart of the sacred land, the point of conception for the new year. In every household throughout the country, hearth-fires were extinguished. All waited for the Druids to light the new fire of the year -- not at Tara, but at Tlachtga, a hill twelve miles to the north-west. It marked the burial-place of Tlachtga, daughter of the great druid Mogh Ruith, who may once have been a goddess in her own right in a former age.

At at all the turning points of the Celtic year, the gods drew near to Earth at Samhain, so many sacrifices and gifts were offered up in thanksgiving for the harvest. Personal prayers in the form of objects symbolizing the wishes of supplicants or ailments to be healed were cast into the fire, and at the end of the ceremonies, brands were lit from the great fire of Tara to re-kindle all the home fires of the tribe, as at Beltane. As they received the flame that marked this time of beginnings, people surely felt a sense of the kindling of new dreams, projects and hopes for the year to come.

The Samhain fires continued to blaze down the centuries. In the 1860s the Halloween bonfires were still so popular in Scotland that one traveler reported seeing thirty fires lighting up the hillsides all on one night, each surrounded by rings of dancing figures, a practice which continued up to the first World War. Young people and servants lit brands from the fire and ran around the fields and hedges of house and farm, while community leaders surrounded parish boundaries with a magic circle of light. Afterwards, ashes from the fires were sprinkled over the fields to protect them during the winter months -- and of course, they also improved the soil. The bonfire provided an island of light within the oncoming tide of winter darkness, keeping away cold, discomfort, and evil spirits long before electricity illumined our nights. When the last flame sank down, it was time to run as fast as you could for home, raising the cry, “The black sow without a tail take the hindmost!”

Even today, bonfires light up the skies in many parts of the British Isles and Ireland at this season, although in many areas of Britain their significance has been co-opted by Guy Fawkes Day, which falls on November 5th, and commemorates an unsuccessful attempt to blow up the English Houses of Parliament in the 17th century. In one Devonshire village, the extraordinary sight of both men and women running through the streets with blazing tar barrels on their backs can still be seen! Whatever the reason, there will probably always be a human need to make fires against the winter’s dark.

Samhain was a significant time for divination, perhaps even more so than May or Midsummer’s Eve, because this was the chief of the three Spirit Nights. Divination customs and games frequently featured apples and nuts from the recent harvest, and candles played an important part in adding atmosphere to the mysteries. In Scotland, a child born at Samhain was said to be gifted with an dï¿½ shealladh, “The Two Sights” commonly known as “second sight,” or clairvoyance.

At the heart of the Celtic Otherworld grows an apple tree whose fruit has magical properties. Old sagas tell of heroes crossing the western sea to find this wondrous country, known in Ireland as Emhain Abhlach, (Evan Avlach) and in Britain, Avalon. At Samhain, the apple harvest is in, and old hearthside games, such as apple-bobbing, called apple-dookin’ in Scotland, reflect the journey across water to obtain the magic apple.

Place a large tub, preferably wooden, on the floor, and half fill it with water. Tumble in plenty of apples, and have one person stir them around vigorously with a long wooden spoon or rod of hazel, ash or any other sacred tree.

Each player takes their turn kneeling on the floor, trying to capture the apples with their teeth as they go bobbing around. Each gets three tries before the next person has a go. Best to wear old clothes for this one, and have a roaring fire nearby so you can dry off while eating your prize!

If you do manage to capture an apple, you might want to keep it for a divination ritual, such as this one:

The Apple and the Mirror

Before the stroke of midnight, sit in front of a mirror in a room lit only by one candle or the moon. Go into the silence, and ask a question. Cut the apple into nine pieces. With your back to the mirror, eat eight of the pieces, then throw the ninth over your left shoulder. Turn your head to look over the same shoulder, and you will see and in image or symbol in the mirror that will tell you your answer.

(When you look in the mirror, let your focus go "soft," and allow the patterns made by the moon or candlelight and shadows to suggest forms, symbols and other dreamlike images that speak to your intuition.)

Go to a boundary stream and with closed eyes, take from the water three stones between middle finger and thumb, saying these words as each is gathered:

I will lift the stone

As Mary lifted it for her Son,

For substance, virtue, and strength;

May this stone be in my hand

Till I reach my journey’s end.

Carry them home carefully and place them under your pillow. That night, ask for a dream that will give you guidance or a solution to a problem, and the stones will bring it for you.

We have 1407 guests and no members online