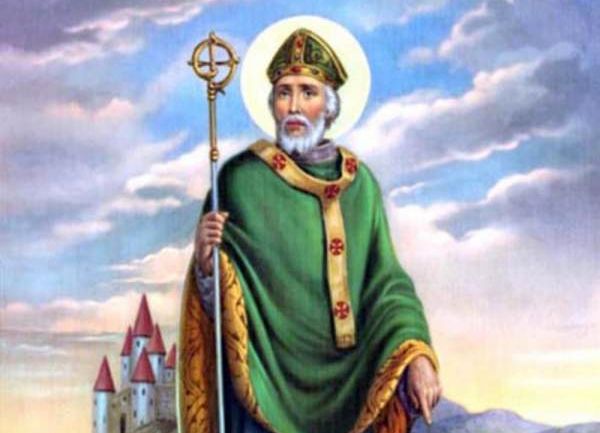 True history and legend are intertwined when it comes to St. Patrick. It is known that he was born in Scotland and was kidnapped and sold in Ireland as a slave. He became fluent in the Irish language before making his escape to the continent. Eventually, he was ordained as a deacon, then priest and finally as a bishop. Pope Celestine then sent him back to Ireland to preach the gospel. Evidently, he was a great traveler, especially in Celtic countries, as innumerable places in Brittany, Cornwall, Wales, Scotland, and Ireland is named after him.

Here it is where actual history and legend become difficult to separate.

Patrick is most known the world over for having driven the snakes from Ireland. Different tales tell of his standing upon a hill, using a wooden staff to drive the serpents into the sea, banishing them forever from the shores of Ireland. One legend says that one old serpent resisted, but the saint overcame it by cunning. He is said to have made a box and invited the reptile to enter. The snake insisted the box was too small and the discussion became very heated. Finally, the snake entered the box to prove he was right, whereupon St. Patrick slammed the lid and cast the box into the sea. While it is true there are no snakes in Ireland, chances are that there have never been since the time the island was separated from the rest of the continent at the end of the ice age. As in many old pagan religions serpent symbols were common, and possibly even worshiped. Driving the snakes from Ireland was probably symbolic of putting an end to that pagan practice.

While not the first to bring Christianity to Ireland, it was Patrick who encountered the Druids at Tara and abolished their pagan rites. He converted the warrior chiefs and princes, baptizing them and thousands of their subjects in the Holy Wells which still bear that name.

According to tradition St. Patrick died in A.D. 493 and was buried in the same grave as St. Bridget and St. Columba, at Downpatrick, County Down. The jawbone of St. Patrick was preserved in a silver shrine and was often requested in times of childbirth, epileptic fits and as a preservative against the evil eye. Another legend says St. Patrick ended his days at Glastonbury and was buried there. The Chapel of St. Patrick still exists as part of Glastonbury Abbey. There is evidence of an Irish pilgrimage to his tomb during the reign of the Saxon King Ine in A.D. 688 when a group of pilgrims headed by St. Indractus were murdered.

The great anxiety displayed in the middle ages to possess the bodies, or at least the relics of saints, accounts for the many discrepant traditions as to the burial places of St. Patrick and others.

What the World Book Says about Saint Patrick: Patrick, Saint (about 389-461), is the patron saint of Ireland. Patrick was chiefly responsible for converting the Irish people to Christianity. He became known as the Apostle to the Irish. His name in Latin is Patricius.

His life: Patrick was born in Britain. His father was a wealthy alderman and a Christian. When Patrick was 16 years old, pirates captured him during a raid and sold him as a slave in Ireland. He served as a shepherd of an Irish chieftain in Ulster. During his captivity, Patrick dedicated himself to religion. He escaped after six years of slavery and returned to his home in Britain.

As a result of his experiences in Ireland, Patrick became driven by the idea of converting the Irish to Christianity. To prepare himself for that task, he studied in the monastery of Lerins, on an island off the southeast coast of France. Patrick also went to Auxerre, France, and studied religion under Saint Germanus, a French bishop. Partly because Patrick's earlier education was inadequate, his religious superiors were reluctant to let him return to Ireland as a missionary. But Palladius, the first Irish missionary bishop, died in 431. Pope Celestine I then sent Patrick to Ireland.

Patrick began his work in northern and western Ireland, where no one had ever preached Christianity. He gained the trust and friendship of several tribal leaders and soon made many converts. Patrick is said to have founded more than 300 churches and baptized more than 120,000 people.

Patrick brought clergymen from England and France for his new churches. He succeeded in his mission in Ireland, even though many British clergymen opposed him and the way he organized his churches. Patrick preached in Ireland for the rest of his life.

His writings serve as the most important sources of information about Patrick's life and work. During his later years, he wrote Confession, an account of his spiritual development. Patrick wrote this book to justify his mission to Ireland. In the book, Patrick expressed his humility and thankfulness that God called him to serve the Irish. Patrick also wrote Letter to Coroticus. In this letter, he criticized a raid on Ireland conducted by Coroticus, a British chieftain. Several of Patrick's converts were killed during the raid. The letter also shows Patrick's resentment of the scornful attitude of British clergymen and nobility toward the Irish.

Legends about Patrick: Many stories about Patrick are based only on legend. One of the best-known tales tells how he charmed the snakes of Ireland into the sea so they were drowned. According to another legend, Patrick used a three-leaf shamrock to illustrate the idea of the Trinity. Many people believe the shamrock came to be the traditional symbol of Ireland as a result of this legend. Today, Irish Catholics throughout the world celebrate Saint Patrick's Day on his feast day, March 17

Saint Patrick brought Christianity to Ireland in the A.D. 400's. Saint Patrick was born in Britain and was taken to Ireland as a slave in the early 400's. After six years of slavery, he escaped to France, where he studied for the priesthood. He returned to Ireland as a Christian missionary in 432. The Irish accepted Christianity and came to regard Patrick as their patron (guardian) saint. Today, his feast day, March 17, is celebrated as a national holiday.

Saint Patrick also introduced the Roman alphabet and Latin literature into Ireland. After his death, about 461, Irish monasteries flourished as centers of learning.