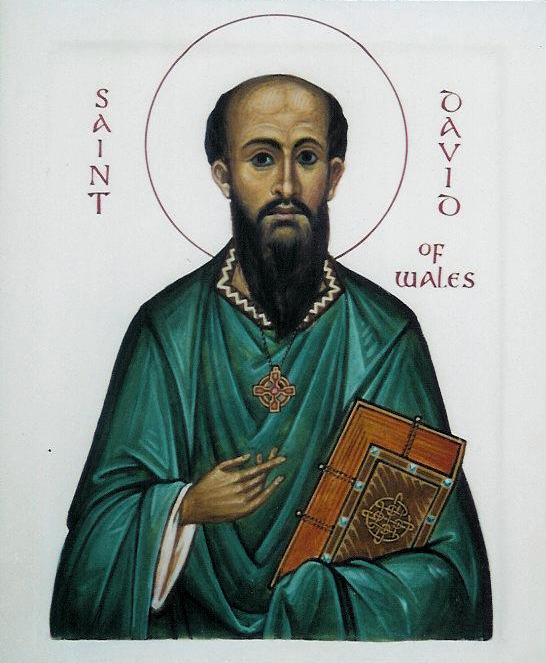 If you were lucky enough to be in Wales on March the first, you would find the country in a festive mood. Every self-respecting man, woman and child would be celebrating St. David's Day in one way or another. But who was St. David, and why is he so important to the Welsh? And just how is St. David's Day celebrated in Wales today?

Well, Saint David, or Dewi Sant, as he is known in the Welsh language, is the patron saint of Wales. He was a Celtic monk, abbot and bishop, who lived in the sixth century. During his life, he was the archbishop of Wales, and he was one of many early saints who helped to spread Christianity among the pagan Celtic tribes of western Britain.

For details of the life of Dewi, we depend mainly on his biographer, Rhigyfarch. He wrote Buchedd Dewi (the life of David) in the 11th century. Gerallt Gymro (Giraldus Cambrensis), who wrote a book about his travels through Wales in the 12th century, also gives some information about Dewi's early life. Dewi died in the sixth century, so nearly five hundred years elapsed between his death and the first manuscripts recording his life. As a result, it isn't clear how much of the history of Dewi's life is legend rather than fact.

However, both sources say, so we can be relatively certain, that Dewi was a very gentle person who lived a frugal life. It is claimed that he ate mostly bread and herbs - probably watercress, which was widely used at the time. Despite this supposedly meagre diet, it is reported that he was tall and physically strong.

Dewi is said to have been of royal lineage. His father, Sant, was the son of Ceredig, who was prince of Ceredigion, a region in South-West Wales. His mother, Non, was the daughter of a local chieftain. Legend has it that Non was also a niece of King Arthur.

Dewi was born near Capel Non (Non's chapel) on the South-West Wales coast near the present city of Saint David. We know a little about his early life - he was educated in a monastery called Hen Fynyw, his teacher being Paulinus, a blind monk. Dewi stayed there for some years before going forth with a party of followers on his missionary travels.

Dewi travelled far on his missionary journeys through Wales, where he established several churches. He also travelled to the south and west of England and Cornwall as well as Brittany. It is also possible that he visited Ireland. Two friends of his, Saints Padarn and Teilo, are said to have often accompanied him on his journeys, and they once went together on a pilgrimage to Jerusalem to meet the Patriarch.

Dewi is sometimes known, in Welsh, as 'Dewi Ddyfrwr' (David the Water Drinker) and, indeed, water was an important part of his life - he is said to have drunk nothing else. Sometimes, as a self-imposed penance, he would stand up to his neck in a lake of cold water, reciting Scripture. Little wonder, then, that some authors have seen Dewi as an early Puritan!

He founded a monastery at Glyn Rhosyn (Rose Vale) on the banks of the small river Alun where the cathedral city of St. David stands today. The monastic brotherhood that Dewi founded was very strict, the brothers having to work very hard besides praying and celebrating masses. They had to get up very early in the morning for prayers and afterwards work very hard to help maintain life at the monastery, cultivating the land and even pulling the plough. Many crafts were followed - beekeeping, in particular, was very important. The monks had to keep themselves fed as well as the many pilgrims and travelers who needed lodgings. They also had to feed and clothe the poor and needy in their neighbourhood.

There are many stories regarding Dewi's life. It is said that he once rose a youth from death, and milestones during his life were marked by the appearance of springs of water. These events are arguably more apocryphal than factual, but are so well known to Welsh-speaking schoolchildren that it is worth mentioning them here.

Perhaps the most well-known story regarding Dewi's life is said to have taken place at the Synod of Llanddewi Brefi. They were to decide whether Dewi was to be Archbishop. A great crowd gathered at the synod, and when Dewi stood up to speak, one of the congregation shouted, 'We won't be able to see or hear him'. At that instant the ground rose till everyone could see and hear Dewi. Unsurprisingly, it was decided, very shortly afterwards, that Dewi would be the Archbishop...

It is claimed that Dewi lived for over 100 years, and it is generally accepted that he died in 589. His last words to his followers were in a sermon on the previous Sunday. Rhigyfarch transcribes these as 'Be joyful, and keep your faith and your creed. Do the little things that you have seen me do and heard about. I will walk the path that our fathers have trod before us.' 'Do the little things' ('Gwnewch y pethau bychain') is today a very well-known phrase in Welsh, and has proved an inspiration to many. On a Tuesday, the first of March, in the year 589, the monastery is said to have been 'filled with angels as Christ received his soul'.

Dewi's body was buried in the grounds of his own monastery, where the Cathedral of St. David now stands. After his death, his influence spread far and wide - first through Britain, along what was left of the Roman roads, and by sea to Cornwall and Brittany.

St David's Day, as celebrated today, dates back to 1120, when Dewi was canonized by Pope Callactus the Second, and March 1st was included in the Church calendar. After Dewi's canonization, many pilgrimages were made to St. David's, and it was reported that two pilgrimages there equaled one to Rome, and three pilgrimages one to Jerusalem. March 1st was celebrated until the Reformation as a holy day. Many churches are dedicated to Dewi, and some to his mother Non.

It is not certain how much of the history of St. David is fact and how much is mere speculation. At the end of 1996, bones were found in St. David's Cathedral which, it was claimed, could be those of Dewi himself. Unfortunately, these were later found to be medieval remains.

I should say that I was fortunate to be born into a Welsh-speaking family. My mother tongue is Welsh, and it is only when we have English-speaking visitors that any English is heard within my home. Naturally, I attended a Welsh-medium primary school, where all subjects except English are taught through the medium of Welsh.

St. David himself spoke an old form of Welsh fourteen centuries ago, and the Saint has become synonymous with keeping the language alive, and all that is good in the Welsh way of life. Welsh is one of the oldest living European languages, and although it has been oppressed for centuries, it has refused to die and is alive and growing today. The Welsh medium schools, which have largely been set up during the past four decades, have played an important part in making the language an everyday language as opposed to just an academic one.

St. David's Day at the primary school began with a religious service in one of the chapels or churches in Carmarthen. We went to school dressed in our Welsh costumes. The girls looked charming in a pais a betgwn - a petticoat and overcoat, made of Welsh flannel, and a tall beaver hat, worn over a frilled white bonnet. The boys wore a white shirt with a jabbot and wrist frills, a Welsh flannel waistcoat, black breeches, long woolen socks and black shoes. To complete the outfit we wore a flat beaver hat. I wore my national costume with pride until I was seven years old, and after that I had to be bribed to do so... I later wore a Welsh flannel waistcoat in honour of the great day.

The pupils marched through the town, led by the Mayor and town dignitaries. People gathered to see us marching past, and to wave us on. Little did they realize that we, the sons and daughters of Welsh Wales, almost froze to death on these mornings. After all, a white shirt was little protection against the cold winds of a March morning, despite having a woolen jumper underneath. If it rained we were doubly miserable. To add to our discomfort the churches and chapels were colder and the services long. Dewi was a strict disciplinarian: he would have been proud of us.

But we went back to school for a bowl of cawl - or leek broth: the traditional St. David's Day meal. After lunch we danced Welsh dances, sang Welsh folk songs and recited Welsh poems. The highlight of the day was the judging of the longest leek competition, but I never envied the winner because he was cheered on to 'eat some of your leek'. Again, Dewi would have approved, because as you probably remember, he was also a vegetarian.

At my secondary school, which was also a Welsh medium school, it was no longer compulsory to wear the Welsh costume on St. David's Day. But we still celebrated: we held an Eisteddfod - a competitive singing, dancing and reciting festival. This lasted all day and ended with an inter-house choir competition. And needless to say, all competitions were in the Welsh language.

Well, I hope that you now have some idea of who St. David was, and why he is so important to the Welsh. Dewi's words still ring down through the ages. So perhaps, as we go about our lives, we would be wise to remember his very last words, and to do the little things.

Adapted from a talk given at OICCU Meeting Point, in Regent's Park College, Monday, 28th February 1994

We have 864 guests and no members online