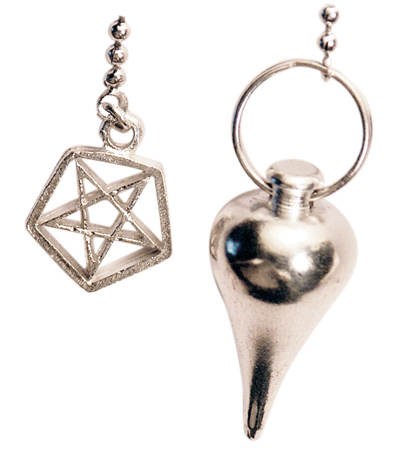 Using a pendulum is a form of dousing and has been used as a divination tool for millennia. The ancient Romans used pendulum divination as described by the Roman historian Ammianus Marcellinus. Nostradamus is said to have used the following Roman method: A bowl was used made of a composite of many metals, or electrum, an alloy of gold and silver. A ring was attached by thread to a wand. The ring was probably a band of electrum with occult characters engraved upon it. The twenty-four letters of the Greek alphabet was engraved into the flange of the basin. A laurel branch tripod probably supported the bowl. (Laurel was the substance specified by the Enochian angels for the scrying table of John Dee.)

The simplest interpretation of the pendulum's movement is in answering YES and NO questions. Simply hold the string or chain of a pendulum as still as possible. Often people brace their elbow on a table to steady it, since even one’s heartbeat can be read by its sensitivity. However, since everyone tends to have their own magickal or psychic signature, there are differing interpretations on how it answers questions. So, you should practice, record your findings and discover if there is a particular way your pendulum chooses to work.

The most basic movement of the pendulum is the linear reading. Back and forth or North and South is a YES answer. And side to side or East and West is a NO answer. Different movements between YES and NO are often interpreted as an ambiguous answer like “Maybe” or “Possibly” or “Not Likely.” In my Family Tradition, we were never allowed to accept an ambiguous answer. Ambiguity in the answer means you’ve asked an ambiguous question and you need to rephrase the question until you get a definitive answer. You keeping working until you gain clarity or there is no purpose in the exercise. It’s ALL ABOUT THE QUESTIONS. 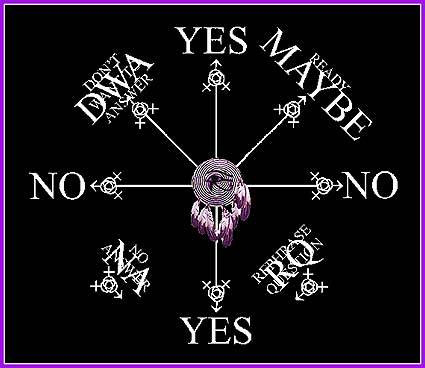 Another movement is the circular reading. If the pendulum swings Widdershins (counter-clockwise), it is a YES answer. If Deosil, (clockwise) the answer is NO. If this seems backwards to Wiccan thinking…it is because in group work the directions encircle the group, instead of being done by one person. In circle, we follow the Wiccan attributions of Deosil (attracting) and Widdershins (banishing). However, in my family tradition…all magickal gestures were interpreted as actions that either draw energy toward you or away from you. So, for a right -handed person, the above pendulum directions would do this. And since right-handedness is dominate, this is largely true for everyone. Yet, every so often, a left-hander might find that the movements and answers reverse for them. Let it. Rules are guidelines to help you find your own personal signature. Rules as to which hand to use are largely contrived. Use the hand that gives you the most accurate answers.

Another interpretation is that either linear direction (back and forth OR side to side in a straight line) means YES and any circular direction (clockwise OR counter clockwise) means NO.

The method that Grandmother taught me was the after dinner pendulum. She would remove one of her rings, usually one that is top heavy, and suspend it from a silk thread or use a necklace with a weighted pendant. She would hang the jewelry over a crystal water goblet just below the lip. The answers came when the ring made bell-like chimes as it gently tapped the side of the glass. A single tap indicates a YES, while two taps indicate NO.

As the digital age has infiltrated the “old ways” there are dozens of pendulum charts that one can make and place under their pendulum, from a simple cross for YES and NO to printed references for very specific questions. I’m not sure this is better training to learn to ask better questions. But experiment and see what your results are.

Most of the charts I’ve found are spoked, fan-shaped charts with the words arched across the top. The pendulum follows the direction of the spoke pointed to the word that is appropriate. Some charts are numbered while others have specific words to aid decision making. Other charts include charts that cover questions on colors, chakras, the elements, months, days or weeks. There are health related charts for vitamin use or disease diagnosis but I’d prefer to go to my doctor for those and not trust my health to a divination form. You can make a pendulum chart for anything you are trying to make a decision on, even if it’s what color to wear to work. You can also make a number chart or percentage chart for timing questions. And thirteen year old girls love to write several boys names on a chart and ask which one is interested in them. 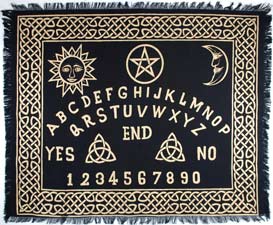 One chart is like a Ouija board with the full alphabet on the chart. For me it’s just easier to use a Ouija board. Mother used to do a form of divination using only her eyes as the mechanism to pick out the letters. She called it Trick Sight. I can do a bit of that, so I can’t use the alphabet pendulum charts because my eyes move faster than the pendulum seeking out each letter.

I prefer the Yes and No practice of the pendulum because it helps grow a better witch by teaching him or her to ask good questions. Again, never accept an ambiguous answer. In our tradition, you’ve failed the exercise if you do not achieve some clarity.

+ - Credit Click to collapse
© 2009 Ardriana Cahill
Ardriana Cahill lives in Western USA and is a Hereditary Witch, den of Clan McCormick and a Kell of Brighid since 1998.
www.ArdrianaCahill.com
Best wishes and Blessed Be
Source Here
back to top
Tweet