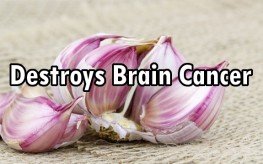 A small group of researchers at Medical University of South Carolina found something that’s useful for anyone willing to properly consume lots of garlic. They discovered that certain organo-sulfur compounds in garlic can in fact kill brain cancer cells without disturbing healthy cells.

But they did this in 2007! It didn’t get much mainstream press, if any. Did we miss something? Maybe Big Pharma is trying to figure out how to create those compounds synthetically to get a patent and pay the FDA for approval after offering dubious papers from sketchy trials. Whether it’s useful for the cancer industry remains to be seen. But the results of this study haven’t received much if any attention from the mainstream press.

Instead of using the study to further explore natural methods of nipping brain cancer in the bud, the cancer industry encourages beginning “proven medical treatments” as early as possible. Treatments like surgery, radiation and chemotherapy offer 15 months or less of drooling before dying. But these “treatments” are proven money makers.

Three researchers teamed up in South Carolina for an in vitro (culture) analysis of what three natural garlic compounds can do to brain cancer cells, specifically glioblastoma, the fastest growing brain cancer tumor common to adults. Two types of glioblastoma cancer cells were cultured, and three sulfur compounds from garlic were administered into the culture.

These compounds are able to get through the blood brain barrier to induce cancer cell apoptosis and prevent future cell growth.

Interestingly, what’s implied from the background of the study abstract is that the protection against carcinogenesis provided by these garlic sulfur compounds was already known. The researchers were attempting to determine the mechanics of how these compounds were so protective.

They found out how and more. They isolated the exact mechanics, and determined that these compounds are more than protective. They do what currently accepted brain cancer treatments are supposed to do but don’t, while leaving other healthy cells alone which those “standard of care” treatments also don’t. Here’s the full text study.

It’s recommended that one peels open garlic cloves and exposes them to air for 15 minutes or so to release those compounds. Some even say crush them for more exposure, then consume them raw to get the full benefits. This may not seem inviting to most, but it sure beats a slow agonizing death with a drool cup.

About the author:
Paul Fassa is dedicated to warning others about the current corruption of food and medicine and guiding others toward a direction for better health with no restrictions on health freedom. You can visit his blog at http://healthmaven.blogspot.com

We have 1869 guests and no members online