The Herbal Remedy to Kick the Smoking Habit & Repair the Lungs 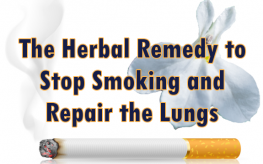 Lobelia, or sometimes called Indian tobacco, has been used by herbalists to help get smokers off cigarettes and heal their lungs. Not necessarily by smoking it, but dispensed as tinctures, tablets, or “vaped” (inhaled through a vaporizer).

This despite the fact that a stigma is attached to lobelia because it was once banned by the FDA, the same bunch who continue allowing Pfizer’s somewhat ineffective smoking cessation drug Chantix to be sold with side effects that include heart attacks, suicides, and even homicides. The same organization that raids raw milk providers, allows suicide-linked antidepressants to stay on the market, and supports organ-disrupting GMOs.

Medical Herbalist and Naturopath, Dr. Richard Schulze, has used lobelia on many of his patients who were desperate to quit smoking cigarettes and/or to heal their lungs. He also described how the FDA ban had stigmatized lobelia’s use. Now it’s legal and some practitioners are returning to prescribing it, but many are still afraid of using it for fear of bureaucratic medical groups hassling them if a patient has any reaction.

Lobelia is considered one of the strongest herbs in the world. It contains 14 alkaloids, one of which is lobeline, which is similar to the nicotine found in common tobacco. Dr. Schulze advocates the gradual approach of smoking one less cigarette each day and taking lobelia when the urge to smoke becomes impossible to resist. He has had many kick the nicotine habit, and he has helped patients get over chronic lung problems with lobelia.

But the treatment won’t work if someone doesn’t really want to quit.

American Indians Managed to Smoke Tobacco Without Lung Cancer – Why?

American Indians’ natural tobacco didn’t have 600 chemicals additives that create a virtual freebasing of nicotine, ensuring they would be addicted forever to chain smoking while incredibly increasing their bodies’ toxic loads. Here’s the chemical additive list in today’s cigarettes – no wonder the effects of smoking can be so detrimental.

The Department of Health and Human Services had approved 599 chemical additives to cigarettes by 1994. Among them are ammonia compounds to create a nicotine freebase effect. Then there are the toxic additives to the paper to make it burn evenly.

In 2010, legislation was passed in 49 states to start putting fire safe cigarettes (FSC) on the market as all the current ones are sold. The FSC’s papers contain a toxic chemical used for rug glue to ensure that cigarettes go out when not being puffed. More on that here.

Even before all this chemical craziness, tobacco itself has been grown commercially with phosphate fertilizers, causing tobacco plants to absorb radioactive isotopes of polonium 210. Puff by puff, those isotopes accumulate in smokers’ lungs.

The slang term “cancer sticks” for cigarettes is truly appropriate. In addition to using these quit smoking tips and consuming certain foods to help you kick the habit, consider Dr. Shulze’s approach with lobelia to get off the smoking habit and/or repair lung damage.

About the author:
Paul Fassa is dedicated to warning others about the current corruption of food and medicine and guiding others toward a direction for better health with no restrictions on health freedom. You can visit his blog at http://healthmaven.blogspot.com

Decide Who Is In Charge ~ Teachings of the Masters
Become a Patron!