Venus Stationary Direct at 6 Gemini Influencing all of 2020-2021 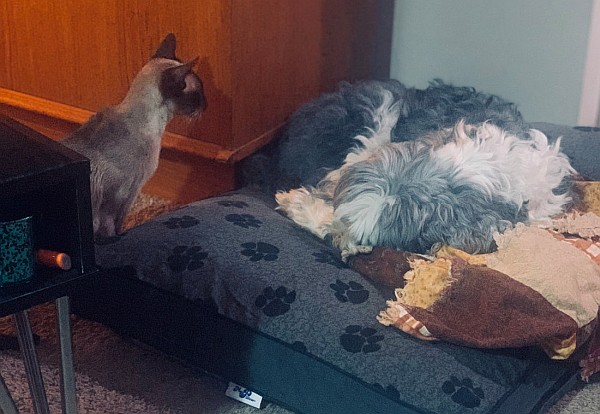 Have you noticed? There are a lot of strange "energies" in the air. Of course, as an astrologer, that rarely surprises me. At this time of year, as the sun moves into Scorpio, there's always a "strangeness" that pervades the air. It is the sense of death and rebirth, the hallmark of Scorpio. If you're lucky enough to have people born at this time of year in your circle of friends, you know. These people, despite all their obstacles and travails, can always make something useful out of what appears to be totally useless.

That's our mission during these weeks, from now until November 21st. Of course, there are obstacles! Planets are not exactly in a state of co-operation at the moment. We must work with what we have, and model ourselves after nature. Although one type of energy, let's say a dog, doesn't necessarily understand or get into the idea of another kind of energy, such as a cat, they can still get along. The key is to explore the unfamiliar, even if it seems "weird."

I wish people were more like cats and dogs, or at least mine, who are in the picture. At the moment, with the political season at full tilt and high roar, the nastiness and interpersonal conflict is pretty unbearable. Friends and family members are in various fights to the death over their political beliefs..

It saddens me, but the poison that is the type of religious fervor that leads to war has not been abandoned just because people don't pay much attention to religion anymore. It's been transferred to politics. That makes me sad, more than I have time to express here.

Yet, that conflict is also part of this season. The energy of Scorpio takes no prisoners. In the heat of battle, the Scorpion might be crunched, curled, and wind up looking seemingly helpless, but it always unfurls itself, stands on all six legs and regains the capacity to sting again!

We are going through so much now as a global community! If anyone really thinks that everything is going to be magically changed after November 4th, they might want to wake up from their fantasy and see the truth. EVERYTHING is changing. The planet is teetering on the brink. There are battles for human dignity on every continent, including, and maybe especially, our own.

What's our job, then? Like I said, it's to make something good out of things that seem terrible. Learn to embrace the ones you love, even if they don't agree with you about everything! Look around you, and see what opportunities you can glean from the raw materials of your talent and your ambitions.

Send out positive energy to the world, NOW. Rather than bickering on social media, take a moment to connect with the creator and pray for harmony among humanity. Fight for your dignity as a member of the human race, and don't let any kind of political dogma rob you of the ability to think for yourself.

OK - I'm done preaching for now.  I'll just give you the astro news for the coming several days, up to the Full Moon on October 31st.

Sun - in Scorpio. This is the time when we think about how we will survive now that the days are getting shorter.  Sun will align tightly with Mercury on the 25th - great for writing and thinking. On the 31st, and during the time of the Full Moon, the sun will oppose Uranus, bringing out the rebels from all corners. Pray that cool heads prevail!

The Full Moon, as stated, takes place on October 31st at 8 degrees of Taurus. Gather your creature comforts and make ready for cooler weather, in many senses of the word. Uranus will give everyone the jitters - there will be surprises that may or may not be so pleasant.

Mercury - still retrograde, sorry! This mischievous little planet will continue to confound travel, communication, and electronics until that day everyone is so excited about - November 3rd. At least it's a good time to get some written projects done.

Venus is going to be somewhat helpful these next several days. A trine to Saturn on the 24th is good for gathering with friends, and as she enters Libra on the 27th, she'll draw attention to what is beautiful and good about life on planet Earth.

Mars - also still retrograde, until November 14th. Stuff is just "stuck" right now. Learn, and practice, the difference between assertion and aggression. Apologize to someone who deserves to know you didn't mean to be so pushy. Cultivate patience, and reserve your passion for the art of showing your love.

Saturn - Finishing up his journey through Capricorn, once and for all, so if you've been having Saturn transits for the last two years, they'll end very soon.

Uranus - still shaking up Taurus, and is in retrograde, asking you to go back and understand what you need to do in order to be set free.

Neptune - Dreams are deeper and sleep more precious while Neptune's retrograde continues. It's in Pisces, which gives us the capacity to see far beyond what we're told is "reality.." Taks some time to have an inner vision.

Pluto - in Capricorn since 2008, presiding over the process of the decay and rejuvenation of our social, political, and economic systems. The impetus is to let go of, and maybe even destroy institutions and traditions, but the best advice we can get is to be damned careful about what we put in their place.

I'm sure there's lots more going on in your life. If you need some guidance, I'm here for you! It's an excellent time to pursue an astrology reading, or explore hypnotherapy, EMDR, or breathwork. Connect with the True Source of all, and know the happiness of realizing, truly, that you are loved, and you will always be protected.
Love you!

We have 1487 guests and no members online