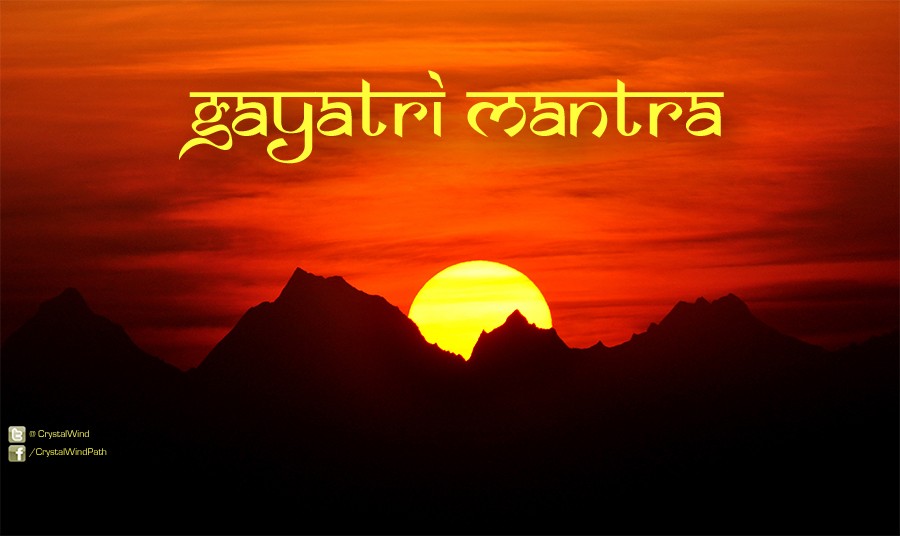 The Gāyatrī Mantra, also known as the Sāvitrī mantra, is a highly revered mantra from the Rig Veda (Mandala 3.62.10), dedicated to Savitr, the Sun deity. Gāyatrī is the name of the Vedic meter in which the verse is composed.

The Gayatri mantra is composed of a metre consisting of 24 syllables - generally arranged in a triplet of eight syllables each. Therefore, this particular meter (tripadhi) is also known as the Gayatri Meter or "Gayatri Chhanda."

Today, this mantra is meditated, chanted and sung not only in Indian subcontinent but all around the world with reverence, devotion and love.  This mantra has soothing and beautiful flow of sounds with various rhythmic patterns making it the most powerful mantra for daily spiritual practice or spiritual enlightenment.

Gayatri mantra has a universal meaning and is applicable to whole mankind irrespective of their faith and religious beliefs. Gayatri mantra is also known as ved mata or Savitri.(Mother of all Vedas).

History of Gayatri mantra
It was written in Sanskrit in the Vedas and dates back 3000 years. Initially only Brahmin men were allowed to say it, but as reformations took place in India, Gayatri was claimed as a universal prayer - every person regardless of race, caste, sex, or colour now has the right to use this mantra. Only the willingness to accept that a Supreme power that runs this universe, will pave your way on this spiritual journey.

As per the vedas, there exist seven spheres or planes or realms of existence, each spiritually advanced than the previous one.  It is said that through spiritual deeds and development, one progressively advances through the seven realm at the end of which one merge with the Supreme god.

Hindus considers Gayatri mantra as a divine awakening of the individual soul (Atma) and mind, and the easiest way to unite with the supreme god- Brahman. Understanding and chanting Gayatri Mantra is considered as the most powerful mantra of realizing God.

Chanting this mantra enlighten the divine light of these seven chakras thus experiencing directly the seven spiritual spheres of existence.

The mantra and its meaning

Actual translation: “We meditate on that most adorable, desirable and enchanting luster and brilliance of our Supreme Being, our Source Energy, our Collective Consciousness; who is our creator, inspirer and source of eternal Joy. May this warm and loving Light inspire and guide our mind and open our hearts.”

The mantra opens our mind, liberates it from ignorance. This soothing prayer creates sound vibrations and energies that bring positivity upon the chanter and the listener.

It is a prayer to the Sun, the one who gives energy, light, brilliance and runs the entire universe. It is asking the Supremacy to bestow upon us the brilliance and take us to the path of enlightenment.

The Gayatri Mantra is a sacred chant, a universal prayer.

The Gayatri mantra is not just any verse or prayer - the consonants are arranged in a specific manner. The human body contains seven chakras which control endocrine glands and nerve ganglions on the body. While uttering the Gayatri mantra, the tongue contacts specific points of the lips and palate, and creates resonance in the vocal cords and brain. Cyclic and rhythmic enunciation of these syllables activates the chakras and stimulates different hormones and nerves in the body.

Ancient sages selected the words of Gayatri mantra carefully and arranged them in such a way that they not only had good meaning but also create amazing vibrations inside the body thus enlightening the powers of righteous wisdom.  Vedic scriptures describe many sages attaining spiritual powers and enlightenment by deep meditation and consistent chanting of this gayatri mantra. Even spiritual practitioners, scientists and meta-physicists are studying and analyzing the effects of gayatri mantra on human mind and body. Even Nasa uses the word AUM to transmit it through the universe to attract inhabitants of other planets (aliens)

Scientists and spiritual practitioners are currently carrying out in-depth research on this. The healing effect of sound energy and vibrations has being used by indigenous people for centuries but only lately has it been recognised as a viable and effective form of medicine. There have been cases where regularly listening to Gayatri mantra has alleviated symptoms in patients including the terminally ill. It is also shown to have a soothing effect on babies who are unable to sleep. In addition, it has de-stressing effect.

Recent research has said that the continuous chanting of this mantra stimulates the power centers located in your subtle body. Continuous enunciation of twenty four syllables of Gayatri Mantra creates a resonating effect on the threads and nerves of the human body.

Pronouncing gayatri mantra creates a pressure on lips, tongue, palate, vocal cord and its connecting areas around the brain to generate the musical flow energizing the sensory energy centers. Continuous repetition of Gayatri Mantra creates a magnetic charge to link the mind with supernatural power currents.

Get the full benefit of Gayatri

The correct pronunciation of syllables is paramount in getting the complete benefit of this mantra. Also, hearing it can give as much benefit as chanting. It is advised to say it 108 times at sunrise, noon and dusk. However for practical purposes, even 3 times a day can serve its purpose. The whole idea is to say it sincerely with open mind and open heart. The authenticity with which you sense, listen or chant the Gayatri mantra will eventually make a difference.

Now that we know the meaning and power of this universal prayer, let us embrace it and walk the road towards spiritual gain.

Sources:
Main: healthyhints.com.au
danamrkich.com
sathyasai.org
Edited by:
www.crystalwind.ca
CrystalWind.ca is free to access and use.
Please support us with a small gift of $11.11 or $22.22 or $33.33.