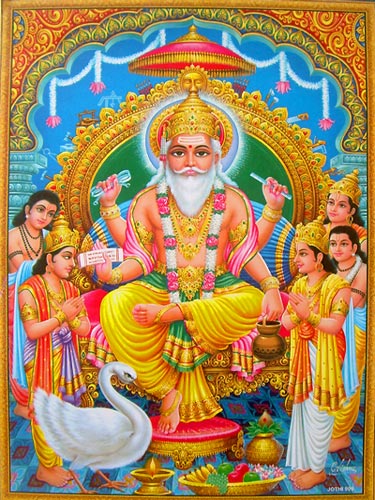 Central to Hindu worship is the image, or icon, which can be worshipped either at home or in the temple.

Individual rather than communal

Hindu worship is primarily an individual act rather than a communal one, as it involves making personal offerings to the deity.

Worshippers repeat the names of their favourite gods and goddesses, and repeat mantras. Water, fruit, flowers and incense are offered to god.

The majority of Hindu homes have a shrine where offerings are made and prayers are said.

A shrine can be anything: a room, a small altar or simply pictures or statues of the deity.

Family members often worship together. Rituals should strictly speaking be performed three times a day. Some Hindus, but not all, worship wearing the sacred thread (over the left shoulder and hanging to the right hip). This is cotton for the Brahmin (priest), hemp for the Kshatriya (ruler) and wool for the vaishya (merchants).

At a Hindu temple, different parts of the building have a different spiritual or symbolic meaning.

* The central shrine is the heart of the worshipper

* The tower represents the flight of the spirit to heaven

* A priest may read, or more usually recite, the Vedas to the assembled worshippers, but any "twice-born" Hindu can perform the reading of prayers and mantras

o Nitya rituals are performed daily and consist in offerings made at the home shrine or performing puja to the family deities.

o Naimittika rituals are important but only occur at certain times during the year, such as celebrations of the festivals, thanksgiving and so on.

o Kamya are rituals which are "optional" but highly desirable. Pilgrimage is one such.

Pilgrimage is an important aspect of Hinduism. It's an undertaking to see and be seen by the deity.

Popular pilgrimage places are rivers, but temples, mountains, and other sacred sites in India are also destinations for pilgrimages, as sites where the gods may have appeared or become manifest in the world.

Once every 12 years, up to 10 million people share in ritual bathing at the Kumbh Mela festival at Allahabad where the waters of the Ganges and Jumna combine.

Hindus from all walks of life gather there for ritual bathing, believing that their sins will be washed away.

The bathing is followed by spiritual purification and a ceremony which secures the blessings of the deity.

The river Ganges is the holiest river for Hindus.

This city, also known as Benares, is situated on the banks of the Ganges and is one of the most important pilgrimage centres.

It is said to be the home of Lord Shiva where legend has it that his fiery light broke through the earth to reach the heavens.

A Hindu who dies at Varanasi and has their ashes scattered on the Ganges is said to have experienced the best death possible.

We have 1619 guests and no members online