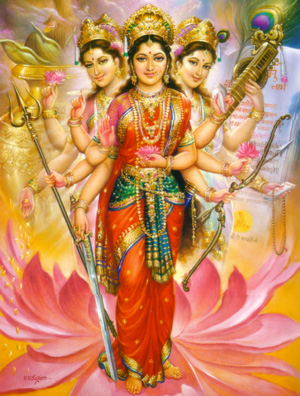 Navaratri (nine nights) is one of the greatest Hindu festivals. It symbolises the triumph of good over evil. Navratri takes place at the beginning of October around harvest time and, as the name implies, this festival is celebrated for nine days. Navratri is also known as Durga Puja.

During this period, Durga, Lakshmi and Saraswati are worshipped as three different manifestations of Shakti, or cosmic energy.

The festival is dedicated to Durga, the mother goddess who also represents power. Durga annihilated the demon Mahishasura after a relentless battle lasting nine days and nights.

The motherhood of God

Navaratri is a festival in which God is adored as Mother. It is said that Shiva gave permission to Durga to see her mother for nine days in the year and this festival also remembers this visit. Families make an attempt to return home on these days, and leave on the tenth.

Hinduism is the only religion in the world which has emphasised to such an extent the motherhood of God.

To celebrate a good harvest and to propitiate the nine planets, women also plant nine different kinds of food grain seeds in small containers during these nine days and then offer the young saplings to the goddess.

During Navaratri, some devotees of Durga observe a fast and prayers are offered for the protection of health and property. A period of introspection and purification, Navaratri is traditionally an auspicious time for starting new ventures.

Navaratri is celebrated by communities getting together for dances and nightly feasts.

In India, the most colourful and elaborate celebrations take part in Bengal, where huge idols of the goddess are worshipped.

In Gujarat painted earthern pots with water or a lamp inside symbolise the power of the goddess.

The flame symbolises everlasting divine power whilst the fluid water is transitory.

Feasts of great variety and delicacy are offered to guests and family during the nine days.

For women, Navaratri is a time for shopping for new clothes and new pots. It is an auspicious time to buy gold or jewellery and the gold markets are open late each night. Women dress elaborately each day for the puja or rituals and nightly dances.

Another part of the puja may involve designing puja-thalis or aartis which are decorated plates in honour of the mother goddess, Amba (Ambika).

The tenth day of the festival is called Dasera, and marks the triumph of good over evil, and also the motherhood of God.

Durga Puja is particularly important for Hindus in Bengal. After having worshipped her for nine days, her image is taken to the streets in a procession and there is much celebration and dancing.

To mark Durga leaving her mother after the nine day visit, her image is cast into water.

In northern parts of India, Hindus also celebrate Rama's victory over Ravana during this time. This festival is called Dussera. The ten days represent the ten heads of Ravana, and each day is used by Hindus to get rid of bad characteristics, such as lust and jealousy. The tenth day is known as the Day of Victory.

We have 1610 guests and no members online