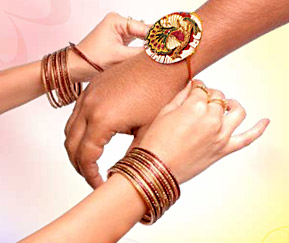 Raksha Bandhan is the Hindu festival that celebrates brotherhood and love. It is celebrated on the full moon in the month of Sravana in the lunar calendar.

The word Raksha means protection, whilst Bandhan is the verb to tie. Traditionally, during the festival sisters tie a rakhi, a bracelet made of interwoven red and gold threads, around their brothers' wrists to celebrate their relationship.

Today the festival has developed with others joining in the festivities:

* Priests tie rakhis around the wrists of congregation members.

* Women tie rakhis around the wrists of the prime minister.

* Rakhis are tied around the wrists of soldiers.

It is believed that when a woman ties a rakhi around the hand of a man it becomes obligatory for him to honour his religious duty and protect her.

Traditional stories state that rakhis are blessed with sacred verses and are encompassed by them.

Sometimes rakhis are consecrated in rice and grass before they are given, and they are traditionally tied by people familiar with the Vedas.

As the rakhi is tied, a prayer is offered asking for happiness and prosperity.

Today rakhis are often decorated with multi-coloured silk thread, and often adorned with stones and beads.

Once the rakhi has been tied a mantra is chanted either in Sanskrit or Punjabi.

At the end of the ceremony the sister places a sweet in her mouth. Following this her brother gives her a small monetary gift of appreciation.

This festival has evolved over the years to encompass the importance of many people in Hindu society, yet foremost it continues to honour and uphold the relationship between a sister and brother.

It is a significant festival in the Hindu calendar, followed eight days later by Janamashtami.

We have 1607 guests and no members online