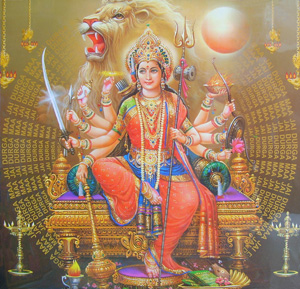 Shakti is the divine force, manifesting to destroy demonic forces and restore balance. Every God in Hinduism has his Shakti and without that energy they have no power. Lakshmi is the energy of Vishnu. Parvati is energy of Shiva. Shakti is also called Devi or mahadevi, assuming different roles as Sati, Parvati, Durga and Kali.

So Shakti is the mother goddess, the source of all, the universal principle of energy, power or creativity. The worship of Shakti as this energy is the main objective of Tantra Yoga. Shakti is inseparable from the one who beholds her, the Shakti-man, the masculine principle or Universal father. Shakti-man is called Brahman by the writers of the Upanishads. In the Tantric tradition he is called Shiva.

The play of female energy has no beginning and no end. Although it is restless, the energy moves through alternating periods of motion and rest, during which order is re-established. Tantra believes that as long as the phenomenal world exists, it is the Universal mother who is the creator, preserver and destroyer. Thus Shakti should be worshipped as an aspect of the divine.

The motivating force behind this eternal play that creates the illusionary world of phenomena is the power of desire. This desire is present in the one who is without attributes, the nameless and formless aspect of the divine.

We have 1632 guests and no members online