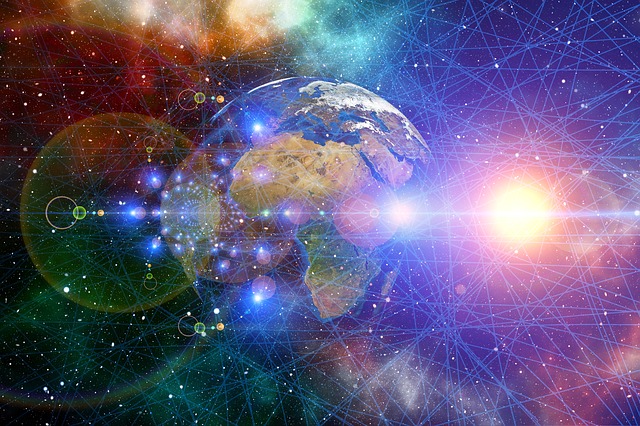 Our journey continues this month following the mystical passage of Venus as she begins her ascent from the Underworld. This story mirrors the ancient myth of Inanna who descended into the Underworld to meet her raging sister Erishkigal who was raped and banished. Inanna was killed by her and hung on a hook to rot for 3 days. By a series of miracles, and the intervention of her handmaiden Lilith, Inanna is resurrected and made whole with her shadow self Erishkigal. Venus is still invisible to us here on Earth until we see her rising again as Evening Star with the Pleiades around the 5th May.

On Monday 12th April 2021 Venus comes conjunct the Moon and this first meeting after her resurrection is metaphorically in the Earth Star Chakra. This chakra connects us into Gaia’s rhythms and brings us into unity consciousness with our planet so it is very important. The meeting takes place in Gene Key 3 with its shadow of Chaos, Gift of Innovation And Siddhi of Innocence – seeing through the eyes of the child. Innocence is just the perfect energy to describe this wholeness we feel when through Grace we come to integrate more fully our shadow selves; our healed self is joyful, playful and unselfconscious; kind, patient and compassionate towards ourselves and others. In this early part of the year the New Moon’s are very close to the Venus conjunctions which makes each one even more powerful time to set intentions and tune into Venus who rules our feelings. On Monday we are in the Crescent New Moon conjunct Ceres the Mother Goddess, Mercury and Chiron all in Aries.

This week Epona#3838, the Celtic white Horse Goddess jumped into my awareness as a Near Earth Asteroid. Epona has been a longtime friend as much of the sacred site journeys myself and my partner have made in Britain (and especially Wales) have connected with her ancient energies. In my early years as a Celtic Priestess in Wales, we always connected to Epona as a Guardian and worked ceremonially with the myth of Rhiannon who is closely connected to her.

In Britain, as you may be aware, there are White Chalk Horses such as the White Horse of Uffington at major power points on the ley line grid. The White Horse of Uffington is where the St Michael/Mary lines which run across the South of the country through places such as Avebury and Glastonbury and the Belinus/Elen lines which run from South to North cross each other. These lines also connect into Europe through the Apollo and Athena lines and beyond.

The White Horse is interchangeable with the Dragon and very much connected with the Earth Light Grid globally, so it feels very right she should have made herself clearly known at this phase of the journey as we awaken within the Earth. Coins have been found from Celtic tribes across Europe that show different glyphs of the horse, so clearly it was an important animal and symbol in Pre-Christian Europe that connected the tribes back then.

Epona is also connected archetypally with the feminine leadership movement; the lead mare is always the leader of the herd over and above the stallions. Her role is to lead the herd to the best pastures and water and so she plays a protective and nurturing role. Imagine just for a moment a world with leaders driven by the mare qualities? Let’s dream that into being!

I was astounded to find that Epona was discovered at 8 Aries 03’ in the same part of the zodiac as the last Venus Star Point (Superior Conjunction of Venus and the Sun) on the 26th March 2021 at 6 Aries 12’. On this day Chiron the Wounded Healer Centaur was at 8 Aries 42’ and Ceres at 13 Aries 03’ also bringing through the Horse energy of freedom and power along with the nurturing of Ceres. My previous blog of the Venus Five-Pointed Star goes more deeply into the imprinting of Venus at this time by the Solar Logos for the next cycle. On the day of Epona’s discovery it was a Full Moon with the Moon exactly opposite at 8 Libra 03’. 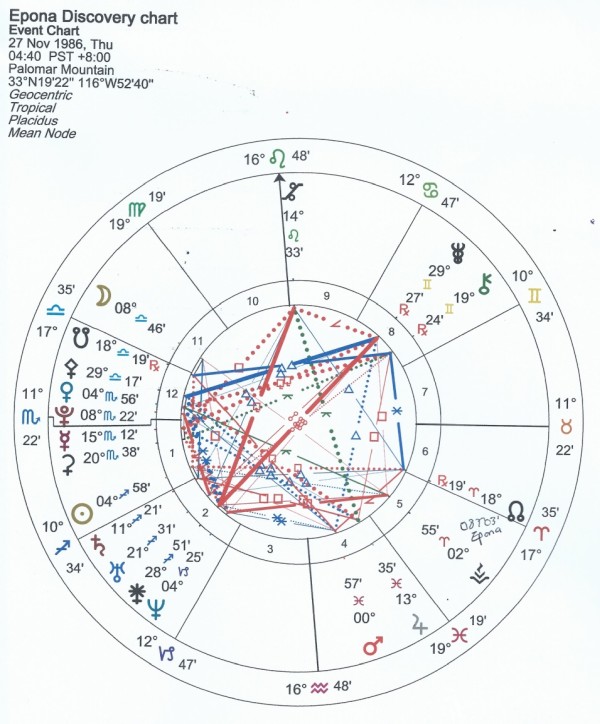 Epona and Chiron both have an elongated elliptic which means that lots more people are born in certain signs. Chiron spends a long time in Aries and Pisces for example, so many of us will be approaching or in our Chiron Return born in the early 1970’s, which for me has been incredibly powerful and liberating.

Epona spends a lot of time in Cancer and Gemini and we could glean from this that she has a special interest in the deeper bonding of clans and communication. One of the most important processes we are engaged in right now globally is the forging of new Tribal bonds based on higher values than just materialism. That impulse can only take us so far; now we are imagining and forging a future based on working together to overcome environmental problems, poverty and inequality globally and entering into a harmonious relationship to the Earth. Of course, there are some who will cling on for dear life to the old Tribal ways, but the tide is turning and there is no stopping it now.

I offer one to one readings and have recently (and finally) embraced giving readings on Zoom – so can now offer a choice of a remote reading receiving the sound files or a zoom reading. I’m also now including in my readings the placement of Mercury and Venus in their phases of Morning or Evening Star along with 6 Goddess Asteroids. If you would like more information please email me at