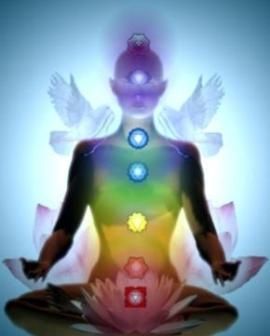 Chakra is an unusual word, it hails from an ancient language - Sanskrit. Consider it similar to how we think of Latin today.

Translated, the word means wheel or a spinning disc. This is because, that was precisely how the visionaries and mystics of ancient times interpreted the energy in and around the human body. We see the same thing in nature - as two energy systems meet, they flow and combine into a cyclical, turning motion. Imagine two cloud systems as they meet, they form a cyclone, or two rivers meeting swirl into a whirlpool. This even happens when you add milk or cream to your coffee! It is just the same motion with the chakra energies too.

We usually talk of the main seven chakras but there are many more. To keep things simple though, we will concentrate on the basic seven chakras. These run the length of the spine, from the very base to the top of the skull, from there their energies flow out into your auric field.

The seven chakras starting from the base of the spine up to the top of the head are called:

Base or Root Chakra

The chakras each take in energy and they also let it out as well - similar to how we inhale and exhale when we breathe.

Personally, I usually see them more as funnels. Imagine taking a spinning disc and pulling it up and out (just as a pot on the potter's wheel) so that it becomes a 3D spiraling funnel. The funnel is pure energy, your own personal and unique essence This includes your hopes, your fears, your beliefs, even your thoughts and habits! In this way, your chakra energy links with your well - being and general health - not just on the physical level but equally on psychological, emotional and spiritual levels too.

Each of the seven chakras is connected via a wonderful network of miniature routes - your intricate lifelines, literally your life force. These meridians of energy cover the body, inside and out. The result is a magnificent matrix or unique tapestry, which is totally unique to you.

With all this energy, moving in and out, it naturally follows that the chakras and the aura are very closely related. As the energy centres expel outwards, they spill into the aura. Equally, the aura affects the chakras as it is from there, they draw their energy in.

As I use the term energy, it's not just your own life force. The chakras act as filters, in a sponge like manner, to the other energies around us. Such energies could include the more obvious ones from your appliances and devices, like mobile phones and microwaves. However many more are not so obvious such as the energy of thoughts, feelings, even words - regardless of whether they are our own or those of other people.

Hence, the environment you find yourself in, is vitally important. You can no doubt relate to feeling differently when you are in the city or a built up area to you do when you are in a more natural environment, like the forest or park. Although you may not have considered it this way before, there is a definite energy linked to our thoughts, actions and words. Someone shouting abuse displays and gives off a very different energy to someone talking peacefully, singing a song or saying a prayer. It's obvious when you think about it, but also incredibly easy to overlook.

Just because we can’t readily see the energy with our own eyes, it doesn’t mean we don’t feel it. We may not be consciously aware of it but it does have a resonance and a consequence to us. Think about how you feel when you hear different types of music, some songs make you want to dance, some to sing out loud and some to cry. Your ears may hear the music but how you feel about it is interpreted elsewhere- through your intricate network of energy.

When you work with Reiki, or any spiritual healing, for yourself or others, you are channeling down a higher vibrational energy, to bring balance or a much needed energy boost. Often we will direct it to a particular area or chakra, depending on what is right and relevant.

It is not uncommon for some chakras to be overactive and we may need to siphon the energy away, possibly to a weaker chakra in the system, thereby bringing balance overall.