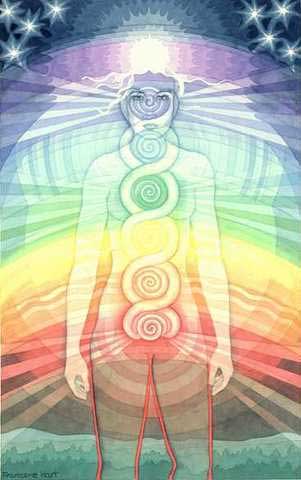 Chakra balancing is based on the ancient Indian belief in a series of seven chakras, or energy centers. Chakra is the Sanskrit word for wheel. These energy centers are believed to be located at specific points between the base of the spine and the top of the skull. Some esoteric systems include additional chakras, said to extend beyond the physical body into the human auric field. Each chakra is believed to relate to particular organs of the body, ailments, colors, elements, and emotions. However, different systems or sources that use the idea of chakras may disagree about the details.

The concept of chakras plays a key role in two ancient Indian healing systems (ayurvedic medicine and yoga) that are popular today. In recent decades, however, many modern therapies (like polarity therapy , therapeutic touch , process acupressure, core energetics, and color therapy ) have also incorporated the idea of chakras into their own visions of healing. Various approaches may be used to "balance" the chakras. Chakra balancing is believed to promote health by maximizing the flow of energy in the body, much as a tune-up enables a car to operate at peak efficiency.

Yoga - Chakras are part of the ancient belief system associated with yoga. These traditions were handed down orally for thousands of years before being codified by Patanjali in his Yoga Sutras, several centuries before Christ.

Ayurveda - The ancient healing science of ayurveda is based on a collection of scriptures known as vedas (a Sanskrit word meaning knowledge or wisdom). Ayurveda literally means "life knowledge." It remained the predominant form of health care in India until the British colonial government tried to suppress it during the nineteenth century. Over the last half-century, however, a modernized form of ayurveda has gained considerable popularity in India. More recently, traditional ayurveda has been popularized in the West by such high-profile advocates as Deepak Chopra.

Balancing the chakras is believed to promote general health and well-being by ensuring the free flow of life energy (also known as prana or qi) throughout the body. It is believed that blockages in the flow of this vital energy will eventually result in mental, emotional, and/or physical illness. By removing such blockages and maximizing energy flow, practitioners are said to enable body, mind, and spirit to function optimally. Some alternative practitioners, such as medical intuitives, say they can "read" a patient's chakras to detect imbalances and diagnose problems. This is also sometimes done using a pendulum.

Just as the various forms of yoga attempt to mediate between the physical and spiritual realms, so the chakras are believed to operate as energy transformers. They are often shown as circles, spaced at intervals along the spine, or sometimes as funnels of energy. Specific chants or sounds associated with the different chakras are used in some yogic meditation practices as tools for healing and spiritual evolution.

Each of the seven chakras is said to have specific physiological and metaphysical functions that relate to both the nature of the associated blockages and to the physical problems they produce.

Base/root chakra (muladhara). The first chakra, located at the base of the spine, is linked with basic survival and with the adrenal glands. It is associated with the color red and the earth element.

Second chakra (svadisthana). Thought to reside in the genital region, this chakra is linked with sexuality and with the reproductive system. It is associated with the color orange and the water element.

Third chakra (manipura). Situated near the navel, this chakra is linked with the pancreas and the solar plexus. It is associated with the color yellow, the fire element, and power in the world.

Throat chakra (visuddha). The fifth chakra, situated in the throat area, is associated with the thyroid gland, the color blue, and communication.

Brow/forehead chakra (ajna). The sixth chakra, also known as the "Third Eye," is said to reside in the forehead. It is associated with hormonal production, the color indigo, and intuition.

Crown chakra (saha srara). The seventh chakra, located at the top of the skull, is associated with elevated spiritual consciousness, the pineal gland, and the color violet.

In recent decades, yoga has gained widespread acceptance in the West as a tool for relaxation, stress reduction, increased flexibility and energy. However, there is no generally recognized scientific evidence for the existence of either chakras or prana.

Although the concept of chakra balancing is harmless, any of the many contemporary therapies that include chakras may also use specific treatments or practices with potential side effects. Anyone exploring such therapies should be cautious and keep his or her healthcare provider informed of these therapies.

Although there is a growing body of research documenting the positive effects of yoga and meditation, chakras have not been measured by scientific instruments. Support for the concept is based on anecdotal rather than scientific evidence.

The Beauty Of You - The Creator

God is Not in the Details

Be Open To Receive This - Star Message

Building Ourselves Up - Daily Angel Message

We have 1831 guests and no members online