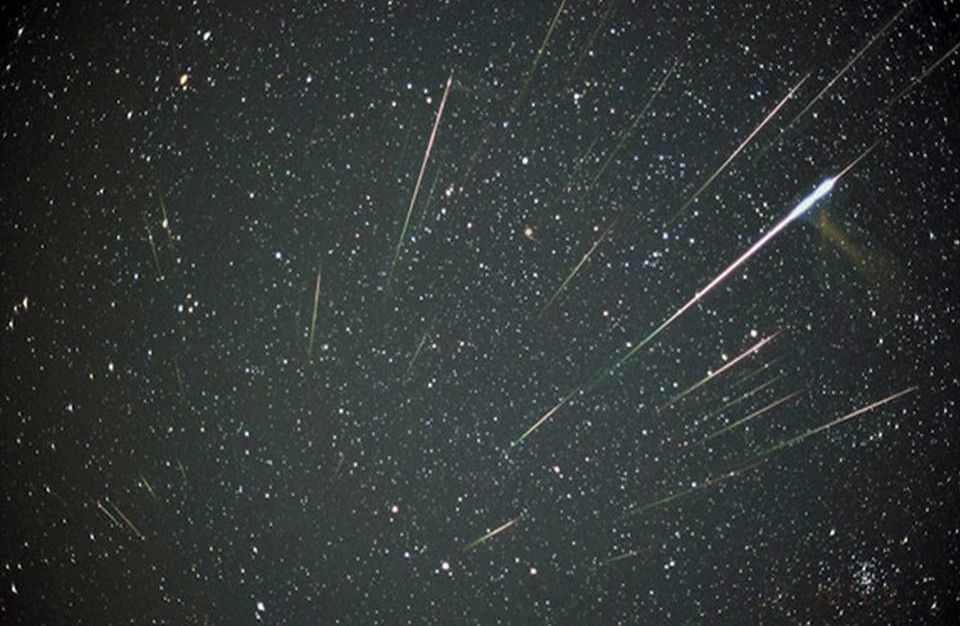 April 22 is the likely peak morning. Try April 21 and 23 as well. For this year’s Lyrid meteor shower, the moon is out of the way!

The annual Lyrid meteor shower has started! It’s active each year from about April 16 to 25. In 2017, the peak of this shower – which tends to come in a burst and usually lasts for less than a day – is expected to fall on the morning of April 22, with little or no interference from the slender waning crescent moon. The greatest number of meteors usually fall during the few hours before dawn. All in all the Lyrid meteor shower prospects look pretty good for 2017, though meteor showers are notorious for their fickle and not totally predictable nature! Follow the links below to learn more about April’s shooting stars!

How many Lyrids meteors can I expect to see in 2017? You might spot a Lyrid meteor anytime during the shower (April 16-25), but the most meteors will probably fall in the dark hours before dawn on April 22. It’s always a good practice to watch on the mornings around the peak as well. In a moonless sky, you might see from about 10 to 20 Lyrid meteors an hour at the shower’s peak. This year, in 2017, the slender waning crescent moon shouldn’t pose too much of a problem.

Of course, meteor showers are notorious for defying the most careful predictions. The Lyrids stand as no exception. An outburst of Lyrid meteors is always a possibility (though no Lyrid outburst is predicted for 2017).

By the way, if you do see a meteor … notice whether it leaves a persistent train – that is, an ionized gas trail that glows for a few seconds after the meteor has passed. About a quarter of Lyrid meteors do leave persistent trains. 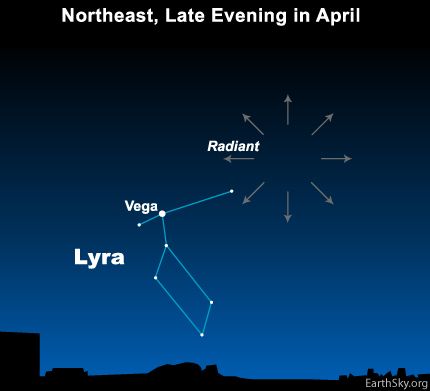 You don’t need to identify Vega or its constellation Lyra in order to watch the Lyrid meteor shower. The idea that you must recognize a meteor shower’s radiant point in order to see any meteors is completely false. Any meteors visible the sky often appear unexpectedly, in any and all parts of the sky.

However, knowing the rising time of the radiant point helps you know when the shower is best in your sky. The higher Vega climbs into the sky, the more meteors you’re likely to see. Be aware that the star Vega resides quite far north of the celestial equator, so for that reason the Lyrid meteor shower favors the Northern Hemisphere.

Around the Lyrids’ peak, the star Vega rises above your local horizon – in the northeast – around 9 to 10 p.m. local time (that’s the time on your clock, from Northern Hemisphere locations). It climbs upward through the night. By midnight, Vega is high enough in the sky that meteors radiating from her direction streak across your sky.

Just before dawn, Vega and the radiant point shine high overhead. That’s one reason the meteors are always more numerous before dawn.

Lyrid meteors in history. The Lyrid meteor shower has the distinction of being among the oldest of known meteor showers. Records of this shower go back for some 2,700 years.

The ancient Chinese are said to have observed the Lyrid meteors “falling like rain” in the year 687 BC.

That time period in ancient China, by the way, corresponds with what is called the Spring and Autumn Period (about 771 to 476 BC), which tradition associates with the Chinese teacher and philosopher Confucius, one of the first to espouse the principle: “Do not do to others what you do not want done to yourself.” I wonder if Confucius saw any Lyrid meteors …

Comet Thatcher is the source of the Lyrid meteors. Every year, in the later part of April, our planet Earth crosses the orbital path of Comet Thatcher (C/1861 G1), of which there are no photographs due to its roughly a 415-year orbit around the sun. Comet Thatcher last visited the inner solar system in 1861, before the photographic process became widespread. This comet isn’t expected to return until the year 2276.

Bits and pieces shed by this comet litter its orbit and bombard the Earth’s upper atmosphere at 177,000 kilometers (110,000 miles) per hour. The vaporizing debris streaks the nighttime with medium-fast Lyrid meteors.

It’s when Earth passes through an unusually thick clump of comet rubble that an elevated number of meteors can be seen.

Bottom line: The Lyrid meteor shower offers 10 to 20 meteors per hour at its peak on a moonless night. The peak numbers are expected to fall on the morning of April 22. Try watching on April 21 and 23, too. In 2017, the light of the waning crescent moon won’t too greatly interfere with the Lyrid shower. In rare instances, Lyrid meteors can bombard the sky with up to nearly 100 meteors per hour. No Lyrid meteor storm is expected this year … but you never know.

We have 2114 guests and no members online