Astronomers Discover ‘Accidental’ Giant Planet ‘That Should Not Be’ 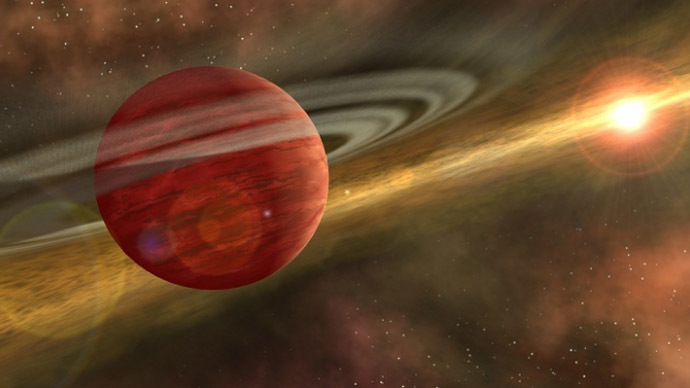 A giant planet that has been found orbiting its star at 650 times the average Earth-Sun distance has stirred immense confusion in the minds of US astronomers, making them question planet formation theories.

The planet – currently known as HD 106906 b – weighs in at 11 times the mass of Jupiter and is orbiting its star at a massive distance of 60 billion miles – a much further distance than any planet has ever previously been seen orbiting its star.

The planet has been described as unlike anything astronomers have ever seen before.

“This system is especially fascinating because no model of either planet or star formation fully explains what we see,” said Vanessa Bailey, the team’s lead researcher with the University of Arizona's astronomy department in a news release.

Planets such as Earth, which are located closer to their stars, are believed to be the results of the amalgamation of smaller asteroid-type bodies. The bodies themselves were formed after the gases and heavier elements remaining after the formation of the sun began to flatten and fuse with the help of the sun’s gravity.

However, with planets such as HD 106906 b, the process becomes more puzzling. The process of formation is far too slow for planets of such large mass, which are so far away from their star. However, Baily offered up her suggestion.

“A binary star system can be formed when two adjacent clumps of gas collapse more or less independently to form stars, and these stars are close enough to each other to exert a mutual gravitation attraction and bind them together in an orbit,” Bailey said.

“It is possible that in the case of HD 106906 system the star and planet collapsed independently from clumps of gas, but for some reason the planet's progenitor clump was starved for material and never grew large enough to ignite and become a star,” she stated.

However, should Baily’s theorizing be correct, it would also induce further questions. The mass ratio of two stars in a binary system, as described by Bailey, is usually no more than 10:1. However, in the case of this new discovery, the mass ratio is over 100:1 – a correlation which could be deemed almost impossible under current theories of planet formation.

The findings are to be published in The Astrophysical Journal Letters under the title “HD 106906 b: A Planetary-mass Companion Outside a Massive Debris Disk.”

We have 2052 guests and no members online