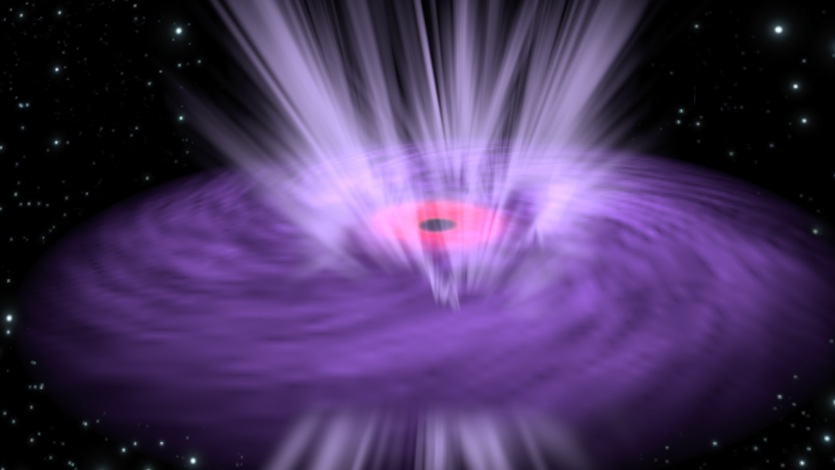 For the first time, astronomers have measured winds associated with a black hole and found they blast along at a quarter of the speed of light.

As in humans, it seems, so in deep space. After consuming large amounts at high speed, hot gas needs to be expelled.

New measurements from NASA's Nuclear Spectroscopic Telescope Array (NuSTAR) have measured the speed, intensity and volatility of ultra-fast streams of hot gas that periodically blast out from close by supermassive black holes.

All black holes are surrounded by “accretion discs” – rings of gas and dust that the holes consume. Despite the phenomenal rate at which they devour this material, sometimes it’s not fast enough to prevent the discs reaching their own critical mass and reacting explosively.

When that happens, the discs spew out hot fast streams of gas in all directions. Moving at a quarter of the speed of light, the gas floods the back hole’s host galaxy in such massive amounts that it can significantly disrupt star formation.

To better measure and track these periodic eruptions, scientists used data from NuSTAR and the European Space Agency's XMM-Newton telescope to monitor a supermassive black hole located in the galaxy IRAS 13224-3809, in the constellation Centaurus. The results have been published by Caltech.

Establishing the temperature of the disc winds, a team led by Michael Parker of the University of Cambridge Institute of Astronomy examined x-rays coming from the edge of the black hole. In particular, they looked at how some parts of the x-ray spectrum were absorbed by elements such as iron and magnesium as they passed through the winds.

They concluded that not only were the winds ultra-fast, they also heated up and cooled down in just a matter of hours.

The cycling was caused by the x-rays being absorbed by the winds, thus raising the temperature to millions of degrees Celsius. After a few hours, saturation point was reached, causing them to cool down rapidly, kick-starting the cycle again.

"We know that supermassive black holes affect the environment of their host galaxies, and powerful winds arising from near the black hole may be one means for them to do so," says NuSTAR Principal Investigator Fiona Harrison, from Caltech. "The rapid variability, observed for the first time, is providing clues as to how these winds form and how much energy they may carry out into the galaxy."

We have 2198 guests and no members online