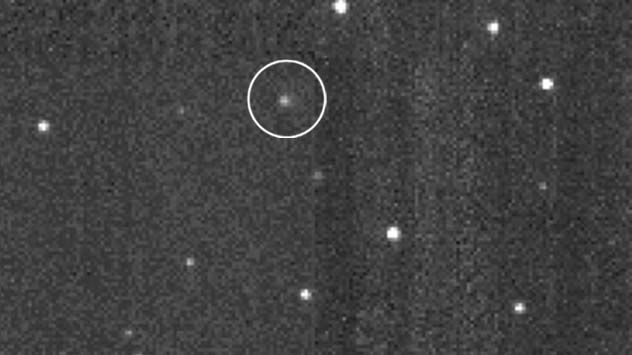 The comet that may put on a spectacular light show during a November date with the Sun, was observed by the Deep Impact mission. The spacecraft has also had close fly-bys of comet's Tempel 1 and Hartley 2 and scientific observations of Garradd.

Editor's Update (Nov. 7): Comet ISON is barreling through the inner solar system as it heads toward a closest approach to the sun on Nov. 28, coming within 730,000 miles (1.2 million kilometers) of the star's surface. Stargazers are capturing amazing views of Comet ISON in telescopes.

Comet ISON will make an appearance in Earth's sky in 2013. While it's hard to predict just how bright the comet will be when it arrives, some astronomers are saying that it could be as bright as the full moon or perhaps, even visible in daylight.

The comet is named after a telescope for the International Scientific Optical Network. Two Russians spotted ISON through a 15.7-inch (0.4-meter) reflecting telescope from that organization.

ISON is considered a "sungrazer," meaning that it will pass very close to the sun when it gets into the inner solar system in November 2013. 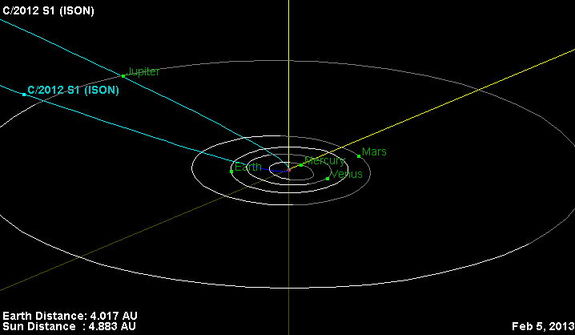 This is the orbital trajectory of comet C/2012 S1 (ISON). The comet is currently located just inside the orbit of Jupiter. In November 2013, ISON will pass less than 1.1 million miles (1.8 million kilometers) from the sun's surface. The fierce heating it experiences during this close approach to the sun could turn the comet into a bright naked-eye object. Image released Feb. 5, 2013.

Amateur astronomers Vitali Nevski and Artyom Novichonok spotted the comet in photographs taken by an ISON telescope in September 2012.

Even from a great distance, the comet does appear bright, making it possible that its nucleus is somewhere between 0.6 miles and 6 miles (1 to 10 kilometers) wide, according to astronomer Matthew Knight of the Lowell Observatory and NASA.

ISON is expected to get as close as 800,000 miles (1.2 million km) from the sun's surface, providing it survives the gravitational forces or the sun's radiation. That closest approach will take place on Nov. 28, 2013.

Traditionally, comets are named after the people who find them, such as Shoemaker-Levy 9 that crashed into Jupiter in 1994, or Hale-Bopp that brightened Northern Hemisphere skies in 1997.

Comet ISON, however, is part of a newer trend that sees the name of the comet after the project rather than the individuals who discovered it. This means that several comets could have the same name, leading to confusion.

For that reason and also because the newer method is less personal, Peter Jedicke, past president of the Royal Astronomical Society of Canada, is calling for a return to the old naming convention.

Every comet also has a name assigned to it by the International Astronomical Union that includes features such as the year of discovery. ISON's official name is Comet C/2012 S1.

At the time of its discovery in late September 2012, Comet ISON was 625 million miles (1 billion km) from Earth in the constellation of Cancer.

At 584 million miles (939 million km) from the sun, the comet was shining at magnitude 18.8 on a scale used by astronomers to gauge how bright sky objects are. (Brighter objects have a lower number.) This is about 100,000 times fainter than what the naked eye can see.

"The most exciting aspect of this new comet concerns its preliminary orbit, which bears a striking resemblance to that of the 'Great Comet of 1680,'" wrote SPACE.com skywatching columnist Joe Rao in a September 2012 article.

That comet put on a dazzling show; it was glimpsed in daylight and later, as it moved away from the sun, it threw off a brilliantly long tail that stretched up from the western twilight sky after sunset like a narrow searchlight beam for some 70 degrees of arc." (A person's clenched fist, held at arm’s length, covers roughly 10 degrees of sky.)

When the comet was still a long ways from Earth, in February 2013, NASA's Deep Impact spacecraft took a series of images of the comet. Deep Impact has snapped close-up pictures of two comets before – Tempel 1 and Hartley 2 – but the astronomers were fascinated by how much activity was taking place on ISON despite its great distance from the sun.

"Preliminary results indicate that although the comet is still in the outer solar system, more than 474 million miles (763 million km) from the sun, it is already active. As of Jan. 18, the tail extending from ISON's nucleus was already more than 40,000 miles (64,400 km) long," NASA stated in a February 2013 press release.

Infographic: Facts about Comet ISON, which could provide a spectacular display in late 2013.

The deep-frozen Comet ISON could blaze spectacularly as it whips past the sun at Thanksgiving 2013.

Preparing for a sky show

With more than a year to get ready, NASA and other organizations are busy making plans for how to observe the comet.

The agency's twin Solar TErrestrial RElations Observatory (STEREO) spacecraft currently does continuous observations of the sun from orbit. This should afford the observatories a good view when the comet swings by the sun in November 2013, NASA stated.

"If Comet ISON works out as expected, the STEREO spacecraft should have a spectacular view," NASA stated.

"During the period when Comet ISON is closest to the sun, it will actually pass in front of the sun as seen from behind [one of the satellites]," the agency added. "This opens up the exciting possibility that we might see extreme-ultraviolet emission from the comet, as was seen recently with the bright sungrazing Comet Lovejoy."

Comets are a notoriously fickle sky object, however, and can flare up or die at times that are difficult to predict. Many observers of a certain age recall the tale of Comet Kohoutek in 1973, which was billed as the "Comet of the Century."

However, the comet did not live up to expectations. It was a visible comet observed by, among others, one of the crews aboard the Skylab space station. But it was nowhere near as stunning as some astronomers predicted.

What's known for sure, however, is ISON poses no threat to Earth. At its closest approach it will still be 40 million miles (64 million km) from Earth, just under half the distance between the planet and the sun.

Multiple comet discoverer David Levy, who was on the team to spot Shoemaker-Levy 9, offered up this bit of advice to SPACE.com concerning comets: "Comets are like cats; they have tails, and they do precisely what they want."

We have 2133 guests and no members online