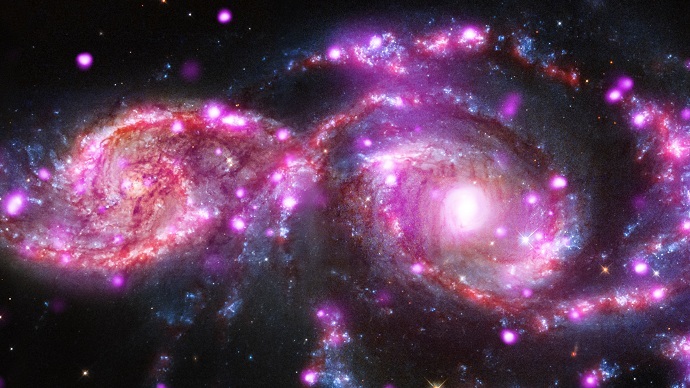 Two colliding galaxies in the Canis Major constellation put on an impressive light display that was captured in a composite image using data from NASA’s Chandra X-ray Observatory.

The galaxies, named NGC 2207 and IC 2163, were “caught in a grazing encounter,” NASA said in a statement. The two have hosted three supernova explosions over the last 15 years, producing “one of the most bountiful collections of super bright X-ray lights known.”

These super bright X-ray lights are called “ultraluminous X-ray sources” ‒ or ULXs ‒ which have far brighter X-rays than most “normal” X-ray binaries, or star systems consisting of a star in a tight orbit around either a neutron star or a “stellar-mass” black hole. The strong gravity of the central object pulls matter from the companion star. As this matter falls toward the neutron star or black hole, it is heated to millions of degrees and generates X-rays, according to the space agency.

The new Chandra image contains about five times more observation time than previous efforts to study ULXs in this galaxy pair. Scientists now tally a total of 28 ULXs between the two galaxies, which are slowly merging. Of those, seven were previously undetected because they were in a “quiet” phase during the earlier studies.

The image was compiled by scientists from the Massachusetts Institute of Technology, the Harvard-Smithsonian Center for Astrophysics in Cambridge and the Harvard Medical School in Boston (all in Massachusetts), and the Sam Houston State University in Huntsville, Texas.

They note there is a strong correlation between the number of X-ray sources in different regions of the galaxies and the rate at which stars are forming in these regions. The compilation shows that X-ray sources are concentrated in the spiral arms of the galaxies, where large amounts of stars are known to be forming. It suggests that the companion star in the binary systems is young and massive. Researchers believe that the stars associated with the ULXs are about 10 million years old.

When galaxies come together, they produce shock waves that cause clouds of gas within them to collapse, leading to periods of intense star formation and the creation of star clusters. The Chandra image “would seem to confirm that they are the result of NGC 2207 and IC 2163 coming together,” Universe Today wrote. “This seem[s] a likely explanation since the merger between these two galaxies is still in its infancy, which is attested to by the fact that the galaxies are still separate.”

The larger NGC 2207 and smaller IC 2163 are both “spiral galaxies,” as is our own Milky Way. This means that they consist of a flat, rotating disc containing stars, gas and dust, and a central concentration of stars known as the bulge. These are surrounded by a much fainter halo of stars, many of which reside in globular clusters.

The two spiral galaxies are expected to finish their collision course in about a billion years, and will likely look even more like the Milky Way than they each currently do, Universe Today reported. Our galaxy is approximately 13.2 billion years old, and spawns only about one to three new stars per year.

The pair of colliding galaxies located 130 million light-years from Earth was discovered by John Herschel in 1835. Together they measure 180,000 light-years across.

We have 1683 guests and no members online