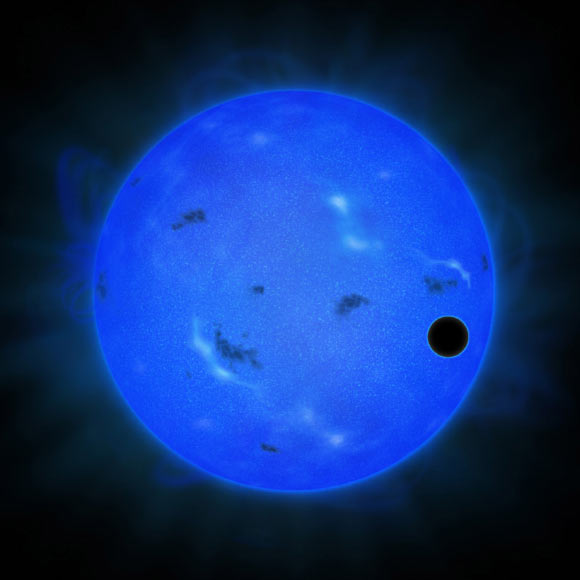 ... from universities, journals, and other research organizations

June 25, 2013 — A team of astronomers has combined new observations of Gliese 667C with existing data from HARPS at ESO's 3.6-metre telescope in Chile, to reveal a system with at least six planets. A record-breaking three of these planets are super-Earths lying in the zone around the star where liquid water could exist, making them possible candidates for the presence of life. This is the first system found with a fully packed habitable zone.

Gliese 667C is a very well-studied star. Just over one third of the mass of the Sun, it is part of a triple star system known as Gliese 667 (also referred to as GJ 667), 22 light-years away in the constellation of Scorpius (The Scorpion). This is quite close to us -- within the Sun's neighbourhood -- and much closer than the star systems investigated using telescopes such as the planet-hunting Kepler space telescope.

Previous studies of Gliese 667C had found that the star hosts three planets with one of them in the habitable zone. Now, a team of astronomers led by Guillem Anglada-Escudé of the University of Göttingen, Germany and Mikko Tuomi of the University of Hertfordshire, UK, has reexamined the system. They have added new HARPS observations, along with data from ESO's Very Large Telescope, the W.M. Keck Observatory and the Magellan Telescopes, to the already existing picture [1]. The team has found evidence for up to seven planets around the star [2].

These planets orbit the third fainter star of a triple star system. Viewed from one of these newly found planets the two other suns would look like a pair of very bright stars visible in the daytime and at night they would provide as much illumination as the full Moon. The new planets completely fill up the habitable zone of Gliese 667C, as there are no more stable orbits in which a planet could exist at the right distance to it.

"We knew that the star had three planets from previous studies, so we wanted to see whether there were any more," says Tuomi. "By adding some new observations and revisiting existing data we were able to confirm these three and confidently reveal several more. Finding three low-mass planets in the star's habitable zone is very exciting!" 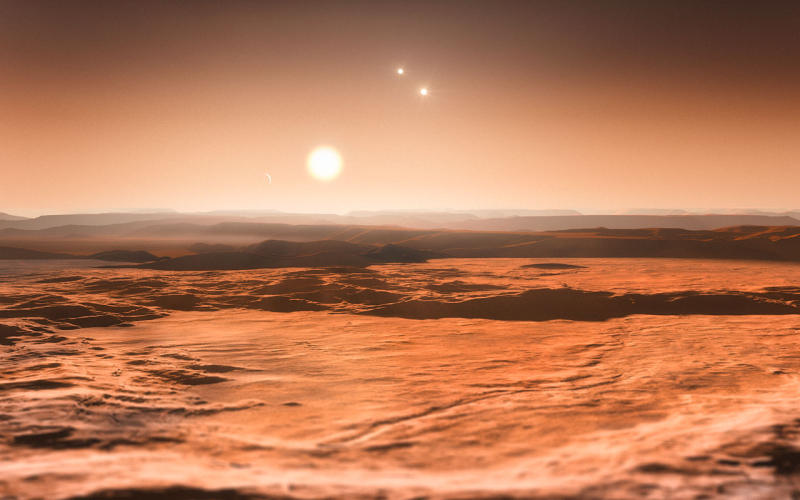 This artist’s impression shows the view from the exoplanet Gliese 667Cd looking towards the planet’s parent star (Gliese 667C). In the background to the right the more distant stars in this triple system (Gliese 667A and Gliese 667B) are visible and to the left in the sky one of the other planets, the newly discovered Gliese 667Ce, can be seen as a crescent. A record-breaking three planets in this system are super-Earths lying in the zone around the star where liquid water could exist, making them possible candidates for the presence of life. This is the first system found with a fully packed habitable zone. (Credit: ESO/M. Kornmesser)

Three of these planets are confirmed to be super-Earths -- planets more massive than Earth, but less massive than planets like Uranus or Neptune -- that are within their star's habitable zone, a thin shell around a star in which water may be present in liquid form if conditions are right. This is the first time that three such planets have been spotted orbiting in this zone in the same system [3].

"The number of potentially habitable planets in our galaxy is much greater if we can expect to find several of them around each low-mass star -- instead of looking at ten stars to look for a single potentially habitable planet, we now know we can look at just one star and find several of them," adds co-author Rory Barnes (University of Washington, USA).

Compact systems around Sun-like stars have been found to be abundant in the Milky Way. Around such stars, planets orbiting close to the parent star are very hot and are unlikely to be habitable. But this is not true for cooler and dimmer stars such as Gliese 667C. In this case the habitable zone lies entirely within an orbit the size of Mercury's, much closer in than for our Sun. The Gliese 667C system is the first example of a system where such a low-mass star is seen to host several potentially rocky planets in the habitable zone.

The ESO scientist responsible for HARPS, Gaspare Lo Curto, remarks: "This exciting result was largely made possible by the power of HARPS and its associated software and it also underlines the value of the ESO archive. It is very good to also see several independent research groups exploiting this unique instrument and achieving the ultimate precision."

And Anglada-Escudé concludes: "These new results highlight how valuable it can be to re-analyse data in this way and combine results from different teams on different telescopes."

[1] The team used data from the UVES spectrograph on ESO's Very Large Telescope in Chile (to determine the properties of the star accurately), the Carnegie Planet Finder Spectrograph (PFS) at the 6.5-metre Magellan II Telescope at the Las Campanas Observatory in Chile, the HIRES spectrograph mounted on the Keck 10-metre telescope on Mauna Kea, Hawaii as well as extensive previous data from HARPS (the High Accuracy Radial velocity Planet Searcher) at ESO's 3.6-metre telescope in Chile (gathered through the M dwarf programme led by X. Bonfils and M. Mayor 2003-2010.

[2] The team looked at radial velocity data of Gliese 667C, a method often used to hunt for exoplanets. They performed a robust Bayesian statistical analysis to spot the signals of the planets. The first five signals are very confident, while the sixth is tentative, and seventh more tentative still. This system consists of three habitable-zone super-Earths, two hot planets further in, and two cooler planets further out. The planets in the habitable zone and those closer to the star are expected to always have the same side facing the star, so that their day and year will be the same lengths, with one side in perpetual sunshine and the other always night.