Once In A Lifetime Galactic Fireworks Display Due From Comet Ison 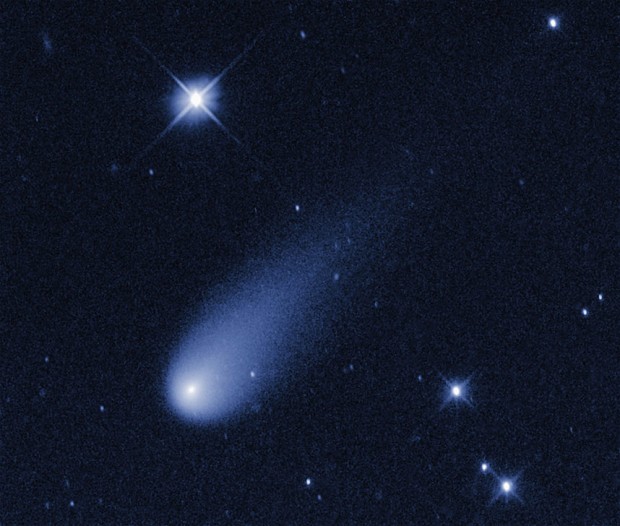 Comet Ison, first spotted a year ago, is now visible to the naked eye and will continue to brighten as it hurtles toward the sun

A once in a lifetime galactic fireworks display appears to have begun after astronomers confirmed that Comet Ison, dubbed the “comet of the century”, has entered the Earth's orbit.

The comet has dramatically brightened with an outburst of gases in recent days as it draws ever closer to the sun, the Times reported, and if it survives it could be the greatest celestial display in more than 300 years.

It is now visible to the naked eye and is expected to continue brightening over the next few weeks until it outshines the moon.

Solar System Scope have created this interactive model of Comet Ison’s path through the solar system, ending in January 2014 when, if it survives its brush with the sun, the comet will no longer be visible to the naked eye.
Click here to see the full 3D graphic

The Comet Ison is so named because it was first spotted on photos taken by Russian’s Vitali Nevski and Artyom Novichonok using the International Scientific Optical Network telescope last September, while it was still 585 million miles from the sun.

The ball of ice and dust is thought to originate from the Oort cloud, a giant swarm of icy remnants from the creation of the solar system, which sits 93 trillion miles from Earth.

Although other comets, such as Hale-Bopp, are thought to have originated from the cloud this is the first “sungrazer” to have come from the space on the edge of the solar system in 200 years.

If predictions are correct the galactic show will rival the Great Comet of 1680, which had a tail 90 million miles long and could be seen during the day because it was so bright, leading many to think it was a punishment from God.

Even if Ison breaks up before then, or fails to survive its perihelion, its closest scrape with the sun, experts believe its death throes could be spectacular and say they have already learnt a great deal from it.

Matthew Knight, an astronomer at the Lowell Observatory in Arizona and a member of Nasa's Ison observation campaign, said: “Astronomers are getting the chance to study a unique comet travelling straight from 4.5 billion years of deep freeze into a near miss with the solar furnace using the largest array of telescopes in history.

“No matter what happens, now that Ison has made it inside Earth's orbit, any or all of these scenarios are scientifically exciting."

If the comet – which is best observed through a telescope or strong binoculars – survives its scrape with the sun it will reach its most brilliant in early December.