The Sun’s Magnetic Field Is About to Reverse (Video) 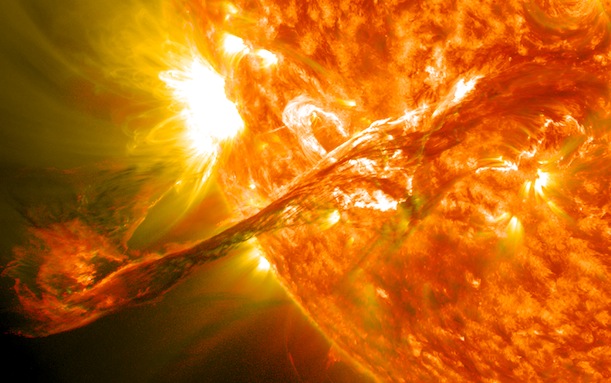 Sometime in the next two or three months, something special will happen: the magnetic field that emanates from the Sun and extends throughout the entire solar system will reverse in polarity.

“It’s really hard to say exactly when it’s going to happen, but we know it’ll be in the next few months, for sure,” says Andrés Muñoz-Jaramillo, a researcher at the Harvard-Smithsonian Center for Astrophysics who studies the Sun’s magnetic cycle. “This happens every solar cycle, and it’s a very special day when it does.”

First, the basics: the Sun, like Earth, naturally generates a magnetic field. The massive solar magnetic field is a result of the flow of plasma currents within the Sun, which drive charged particles to move from one of the Sun’s poles to another.

Every 11 years, the strength of this magnetic field gradually decreases to zero, then emerges in the opposite direction, as part of the solar cycle. It’s as if, here on Earth, compasses pointed towards the Arctic as “North” for 11 years, then briefly wavered, then pointed towards Antarctica as “North” for the next 11 years (in fact, the Earth’s magnetic field does reverse as well, but it occurs with much less regularity, and takes a few hundred thousand years to do so).

Recent observations indicate that the next solar magnetic reversal is imminent—in August, NASA announced that it was three or four months away. The reversal, explains Muñoz-Jaramillo, won’t be a sudden, jarring event but a gradual, incremental one. “The strength of the polar field gradually gets very close to zero,” he says. “Some days, it’s slightly positive, and other days, it’s slightly negative. Then, eventually, you see that it’s consistently in one direction day after day, and you know the reversal has occurred.” His research group’s measurements of the magnetic field suggest this reversal is a few months away, but it’s impossible to say for sure which day it’ll occur.

Because the region that the solar magnetic field influences includes the entire solar system, the effects of the reversal will be felt widely. “The magnetic field flows out into interplanetary space, and it forms a bubble that encloses the solar system as it travels through the galaxy,” Muñoz-Jaramillo says.

One aspect of this bubble—formally known as the heliosphere—is an invisible electrically-charged surface called the current sheet pervades the solar system and resembles a twisted ballerina’s skirt, because the rotation of the Sun twists its far-flung magnetic field into a spiral. The reversal of the field will cause the sheet to become more rippled, which in turn will lead the Earth to pass through the sheet more frequently as it orbits the Sun. 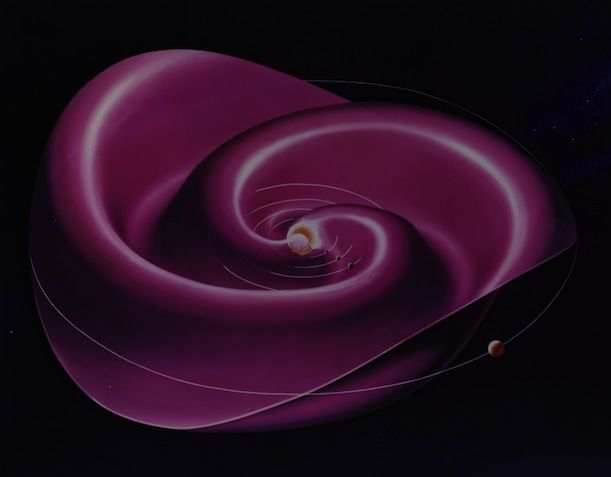 Passing through more often could cause more turbulent space weather, potentially leading to disruptions in satellite transmissions and telecommunications equipment. On the other hand, the current sheet also blocks high-energy cosmic rays that arrive from other areas of the galaxy, so a more wavy sheet could provide satellites and astronauts in space more robust protection from harmful radiation.

Additionally, the magnetic field reversal coincides with the maximum of other solar activity, which means a greater number of sunspots, more powerful solar flares, brighter aurorae and more frequent coronal mass ejections. Most of these events have little or no effect on Earth, but an especially powerful flare or plasma ejection aimed in the right direction could knock out Earth-based telecommunications systems. At the same time, this solar cycle has been especially weak—NASA solar physicist David Hathaway called it “wimpy” in an interview with Scientific American—so there’s not a ton to worry about with this particular reversal.

For Muñoz-Jaramillo, who spends his days monitoring and analyzing the Sun’s magnetic activity, the reversal will also have personal significance. “Because the cycle is such a long process, in terms of a human’s lifetime, a solar scientist is going to see maybe four reversals in a career,” he says. “That makes every turning point special—and this is the first time I’m seeing one of these since I started studying solar physics.”

For more on the solar reversal, take a look at NASA’s video:

We have 1981 guests and no members online