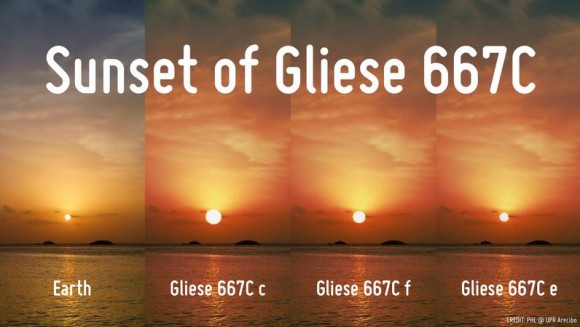 A closer look at the previously-studied nearby star Gliese 667C has revealed a treasure trove of planets – at least six – with three super-Earths in the habitable zone around the star. Gliese 667C is part of a triple star system (Gliese 667) and is just over one third of the mass of our Sun. Now that we know there are multiple planets in the so-called Goldilocks zone – a region where liquid water could exist — Gliese 667C might be the best candidate for harboring habitable exo-worlds.

“We knew that the star had three planets from previous studies, so we wanted to see whether there were any more,” said Mikko Tuomi from the University of Hertfordshire in the UK, one of the astronomers who led the new study of Gliese 667C. “By adding some new observations and revisiting existing data we were able to confirm these three and confidently reveal several more. Finding three low-mass planets in the star’s habitable zone is very exciting!”

Artist’s conception of the seven planets possibly found orbiting Gliese 667C. Three of them (c, f and e) orbit within the habitable zone of the star. Image is courtesy of Rene Heller/ Carnegie Institution for Science.

Tuomi, along with Guillem Anglada-Escudé of the University of Göttingen, Germany looked at existing radial velocity data from the HARPS spectrograph at ESO’s 3.6-metre telescope in Chile. The team said they are extremely confident on the data on the first five planets, while the sixth is tentative, and a potential seventh planet even more tentative.

The team writes in their paper:

Up to seven periodic signals are detected in the Doppler measurements of GJ 667C data, being the last (seventh) signal very close to our detection threshold.

The significance of the signals is not affected by correlations with activity indices and we could not identify any strong wavelength dependence with any of them.

The first six signals are strongly present in subsamples of the data. Only the seventh signal is unconfirmed using half of the data only. Our analysis indicates that any of the six stronger signals would had been robustly spotted with half the available data if each had been orbiting alone around the host star. 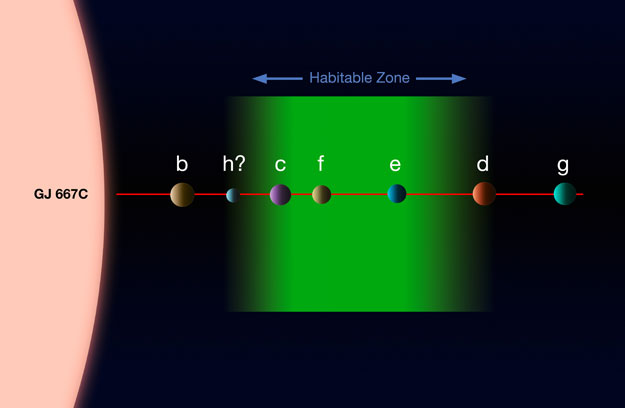 This diagram shows the system of planets around the star Gliese 667C. A record-breaking three planets in this system are super-Earths lying in the zone around the star where liquid water could exist, making them possible candidates for the presence of life. This is the first system found with a fully packed habitable zone. The relative approximate sizes of the planets and the parent star are shown to scale, but not their relative separations. Credit: ESO

This diagram shows the system of planets around the star Gliese 667C. A record-breaking three planets in this system are super-Earths lying in the zone around the star where liquid water could exist, making them possible candidates for the presence of life. This is the first system found with a fully packed habitable zone. The relative approximate sizes of the planets and the parent star are shown to scale, but not their relative separations. Credit: ESO

But the team said the three in the habitable zone are confirmed to be super-Earths. These are planets more massive than Earth, but less massive than planets like Uranus or Neptune. This is the first time that three such planets have been spotted orbiting in this zone in the same system.

“The number of potentially habitable planets in our galaxy is much greater if we can expect to find several of them around each low-mass star,” said co-author Rory Barnes from the University of Washington, “instead of looking at ten stars to look for a single potentially habitable planet, we now know we can look at just one star and find several of them.”

The planets in the habitable zone and those closer to the star are expected to always have the same side facing the star, so that their day and year will be the same lengths, with one side in perpetual sunshine and the other always night.

The researchers say that the ‘f’ planet is “a prime candidate for habitability.”

“It likely absorbs less energy than the Earth, and hence habitability requires more greenhouse gases, like CO2 or CH4,” the team wrote in their paper. “Therefore a habitable version of this planet has to have a thicker atmosphere than the Earth, and we can assume a relatively uniform surface temperature.”

The other stars in the triple system would provide a unique sunset: the two other suns would look like a pair of very bright stars visible in the daytime and at night they would provide as much illumination as the full Moon.

Are there more planets to be found in this abundant system? Perhaps, but not in the habitable zone. The team said the new planets completely fill up the habitable zone of Gliese 667C, as there are no more stable orbits in which a planet could exist at the right distance to it.

Nancy Atkinson is Universe Today's Senior Editor. She also is the host of the NASA Lunar Science Institute podcast and works with the Astronomy Cast and 365 Days of Astronomy podcasts. Nancy is also a NASA/JPL Solar System Ambassador.

We have 1687 guests and no members online