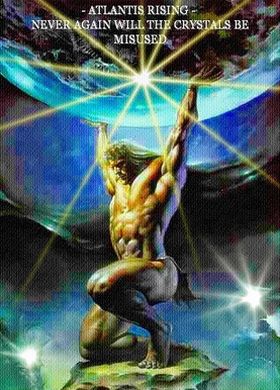 The Law of One & The Golden Age of Atlantis

Edgar Cayce remains perhaps the most credible and genuine ‘channelers’ of the past 150 years. His medical readings and past life, past civilization readings are acclaimed and studied by millions at his institute, the Association for Research and Enlightenment, located in Virginia Beach, Virginia. The executive director for the A.R.E is the esteemed John Van Auken. He has written over 25 books on Edgar Cayce’s readings, and was involved in the Atlantis Research project. He will be one of the featured speakers at the 12-12-12 and will speak on ‘Edgar Cayce’s Atlantis’.

According to Edgar Evans Cayce, the son of Edgar Cayce, over 700 of Cayce’s 2500+ life readings refer to Atlantean incarnations. Cayce said the Golden Age of Atlantis was led by a very spiritual society called the ‘Law of One’. The Law of One was primarily based in the Atlantean region called Poseida. The Law of One, as stated in the Cayce readings, held the highest standards of consciousness ever achieved on the Earth. The ‘Law of One’ were able to continue vibrating at the very highest level of light and energy, and remained very close and true to the one Creator/God, even as the other groups on Atlantis began to fall into the throes of downward spiral through seeking power and material gain over love.

Cayce speaks of an Atlantis which was extremely advanced scientifically with very complex, highly developed technology which allowed them to have aircraft, very unique air-balloons, submarines, elevators, a broadcasting system similar to television, and even computers! Crystal technology was used to power everything. Some crystals had industrial and energy generation purpose and others were Temple Crystals used for creating energy fields of high resonance, calibrating chakric systems, healing, cosmic travel, education and even rejuvenation.

In what was termed the ‘Golden Age’ many souls on the planet were not yet in ‘human bodies’. Many extra terrestrials manifested in light form, especially the Sirians, Pleiadeans and Arcturians. Those in physical bodies were able to live extremely long life times, some as long as 10,000 years through the rejuvenation processes.

After the 2nd breakup of Atlantis, the continent broke into 5 islands, 3 primary ones called Aryan (the largest), Og and Poseida. Much of the cohesiveness was lost, and the people of Aryan fell under the spell of a militaristic, corporate driven leadership. The Aryans cleverly and deceitfully gained control of the technologies.

According to Cayce, Atlantis was destroyed by massive ‘mega-explosions’. The final destruction came from the misuse of their advanced technology by the Aryan Group, in stark opposition to the ‘Law of One’ group of Poseida.

The final destruction lasted over a period of months … not just days or weeks, but months. The final end came around 10,500 BC.

All the readings indicated that ample warnings were given and than many Atlanteans were, in fact, able to escape prior to the final ‘sinking’. Some sought safety by going to Europe and Africa whilst some found refuge in North & South America.

Although many of the life-readings given by Cayce were expressed in ‘biblical’ terminology that was often quite difficult to understand at first sight, by studying the texts very carefully and piecing many of them together as one would a jig-saw, we are able to obtain something of a general ‘over-view’ of the History of Atlantis according to Cayce’s prolific information.

The earliest Atlanteans are described by Cayce as being light-thought projections and having a semi-physical form in which both sexes, male and female, were present in the same ‘body’. These Atlantean thought-form ‘beings’ – projecting ‘vibrations’ of pure white light and energy – gradually began to take on a more material shape and density and began to engage upon acts of sheer self-indulgence. These physically-encased thought-form projections, through the passage of time, began to separate into two groups; those who followed the Laws of One and those that chose to follow the Sons of Belial based on the island of Aryan.

The Law of One still maintained the highest standards of consciousness and were able to continue vibrating at the ‘very highest’ level of light and energy; and still remained very close and true to the one Creator/God. They were a benevolent loving society, with matriarchal, peaceful & nurturing characteristics and aspects.

The Law of One were completely peaceful, absolutely non-violent and were as a society somewhat vulnerable to the cunning and cloaked political intrigues of the Aryan Group. To an extent the non-aggressive, focus on peace and honesty that was held by the Law of One, became the tools used by the Aryans to set up a complex and cunning deception that enabled them to take control of the crystals. The Aryans became involved in the accumulation of power and used the advanced technology, including the genetic engineering capacities and crystal energy for untoward goals of world control. The developed a race of genetically engineered ‘slave workers’. The Aryan faction began to use the technology to dominate the world. The Tuaoi crystal was used to create earthquakes in other areas, and used as a death ray. This destructive use imbalanced the system and led to the destruction of the crystal satellite motherboard. Its crash and explosion created a series of earthquakes and explosions throughout the energy system.

Most of the surviving ‘Law of One’ migrated to Egypt, Bolivia, Yucatan and Arkansas. For a few generations some areas retained higher educational status, and sustained technology. But with the land masses gone, in time the areas fell into disconnectivity and disarray. Atlantis was gone.

Once the end came, there was a ‘too-late’ recognition on the part of the ‘Law of One’ that the utopia was lost. But they vowed to return one day, and never again be naive, or duped. The return is happening in 2012. Were you part of the Law of One. Do you feel the clarion call of the Return?

Before Atlantis was taken over by the Aryians in its final destructive stage, a beautiful, peaceful and highly spiritual matriarchal society called the 'Law of One' presided in extraordinary harmony for over 20,000 years in what Edgar Cayce termed the 'Golden Age of Atlantis'. The era of the Law of One Golden-Age of Poseida achieved the highest frequency of Love ever actualized on planet Earth. They are now re-emerging.

Transition into the Quantum Crystalline Field

The Vortex of the Golden Law of One

Greetings! I am Metatron, Lord of Light! We encompass each of you in a vector and field of Unconditional Love within coded light. We nurture you, we honor each of you. We know you by heart, by tone, by name. It has always been so!

Every life is a sacred opportunity to explore and discover what dwells within. Upon the earth, the expanded dimensional overlays of the Crystalline Transition fulfills this promise by the hallowed movement into Mer-Ka-Na.

Awareness evolves therein into wisdom, and wisdom into Conscious Mastery....and beckons the return home into the honored crystalline light of Divinity.

And so we speak of the Crystalline Transition and its anchoring in the Crystalline Vortex of the sacred ARK. It involves so many of you from the Golden Age of harmonic, peaceful Atlantis, the era of the forgotten 'Law of One'.

Reemergence of The Golden Law of One

Many do not realize that within a Golden Phase that endured over 20,000 years, Atlantis was a highly spiritual matriarchal society that existed in beautiful harmony.

This advanced, peaceful society was termed the 'The Law of One'. Edgar Cayce readings referred many times to the beauty and benevolence of this 'Law of One' society in what he termed the Golden-Age of Atlantis.

The Atlanteans of the Law of One were extremely tall, often exceeding 12 feet in stature. There skin was a translucent golden bronze color. They were of Pleiadean Star-Seed with full 12-strand DNA and extremely high levels of consciousness, exuding pure love. Their physical form was very light, at times they pulsed a very visible aura of yellow gold that extended over 20 meters from their 12 chakra system.

This Golden Law of One society in Atlantis represented what humanity will in time regain. The Golden Era of Atlantis in the society of the Law of One was the most evolved, the highest frequency ever achieved by humanity in duality, more elevated in spirituality than LeMuria.

Many of you were part of the Law of One. Your hearts were broken when the greedy militaristic Aryian faction cunningly took over Atlantis , misused the crystals and led to the sad demise.

But the Law of One are now re-emerging, and it begins with the promise that will indeed be kept. The Temple Crystals will never again be misused.

They are reawakening in Arkansas and Brazil. The Crystal Vortex of Arkansas completes on the 12-12-12. It is why many of you are drawn to this energy, for it is a long awaited, deeply cherished completion.

Excerpt from Metatron Channel: "The Fall of Atlantis"

...Time and probability are a beautiful illusionary paradox....And this is why we tell you that the Golden Age of Atlantis is actually an event horizon from your future, that you pulled into your 'seeming' past!

The Crystals of Arkansas

And so now we skip forward 12,500 years, and we look at the role of the Atlantean colony you now call Arkansas.

The crystals were specifically placed in areas of supreme importance for the new earth emerging in the 2012 Ascension. Areas that were easily accessed though the Atlantean interdimensional tunnel system. The are defined and placed as follows:

Original article from the James Tyberonn newsletter of August 8th, 2012.

We have 743 guests and no members online