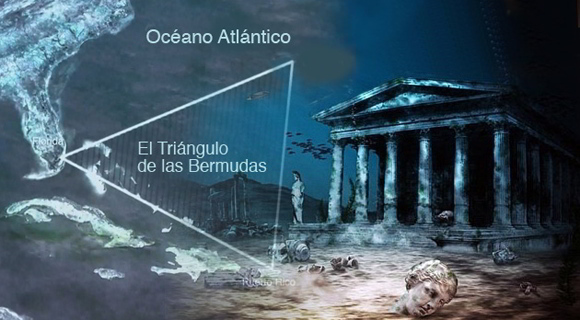 Perhaps eclipsing the tomb of Troy and King Tut discoveries is the discovery of Atlantis. Now, two daring scientists, Paul Weinzweig and Pauline Zalitzki, claim that they have found it. They discovered the submerged ruins of the ancient city on the shores of Cuba. In the distant past, the region was dry land, but now only the island of Cuba remains above water. The ancient city is at 600 feet below the ocean and the team of researchers led by Weinzweig and Zalitzki is convinced that is Atlantis, the lost city for more than 10,000 years.

Atlantis is in the Bermuda triangle

Two scientists, Paul Weinzweig and Pauline Zalitzki, working off the coast of Cuba and with a submersible robot, have confirmed there is a gigantic city in the bottom of the ocean. The site of the old city - which includes several Sphinxes and at least four giant pyramids and other structures - surprisingly is located within the boundaries of the legendary Bermuda triangle.

According to a report by Arclein of Terra Forming Terra, Cuban Subsea Pyramid Complex, evidence indicates that the city was flooded simultaneously with the rising of the waters and the sinking of the land into the sea.This corresponds exactly with the legend of Atlantis.

The disaster could have happened at the end of the last ice age. As the Arctic ice sheet has melted catastrophically caused the sea level to increase rapidly around the world, especially affecting the northern hemisphere. The coast lines changed; land was lost; the Islands (including the island continent) disappeared.

The Greek philosopher Plato wrote of the lost Atlantis

At the end of the last ice age the sea level were almost 122 metres below today's levels. Once the waters started to rise, they rose rapidly. Theoretically, any technology then or now, could have saved Atlantis from its watery grave. The evidence that the Earth, in what is now the Caribbean, also sank in the sea concurrently seems to be very true.

Arclein observes: "high when portions of the Dorsal half of the Atlantic declined also including Lyon and the Islands and landmass around the Azores. Even if this has not happened, this collapse was big enough.

"This would have produced a pressure orthogonal to forcing the collapse of East or West. Since the ridge between Cuba and the Yucatan is the natural point of weakness among the Gulf basin subsidence and subsidence of the basin of the Caribbean, naturally gone deep. "The driver of all this was the hydrostatic changes brought about by both the original cortical shift of 12,900 years ago I called the non-conformity of the Pleistocene and lift slowly the watershed of Hudson Bay by the end of the ice age".

According to journalist Luis Mariano Fernández city was first discovered decades ago, but all access to her was arrested during and after the Cuban Missile Crisis.

"The United States Government discovered the alleged place during the Missile Crisis in Cuba in the 1960s, nuclear Cruiser submarines found structures (in the deep sea)-shaped pyramid in the Gulf. They immediately closed the site and took control of it and the objects, so that they will not come at the hands of the Russians."

The scientific team of experts from the bottom of the ocean and oceanographers, archaeologists found ruins of old buildings of 183 meters below the ocean. They say that the city is Atlantis. 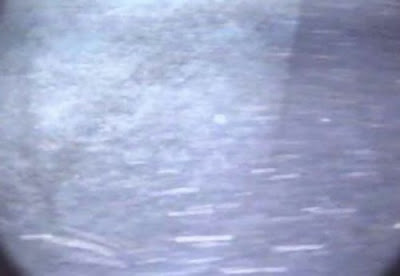 Pyramids and Sphinxes larger than in Egypt

Evidence that the island of Cuba is the remnant of a culture once powerful is supported by the discovery of Zalitzki in the island which contains symbols and pictograms extremely old identical to those observed in the underwater structures. 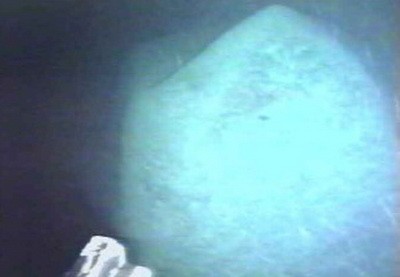 A second pyramid giant photographed by the ROV [image: LMF]

Using submersible exploration, discovered similar incredibly huge pyramidal structures (even greater that) the pyramids in Giza, Egypt. They estimate that the pyramids of Atlantis are built with stones of several hundred tons of weight. 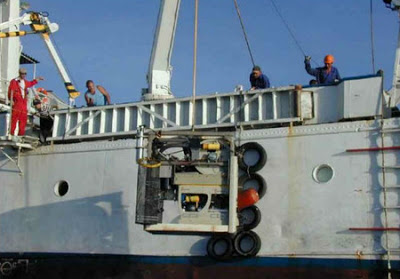 Incredibly the ancient city also has magnificent Sphinxes and "stones which are arranged as in Stonehenge, and a written language engraved on stones," advises Fernandez. 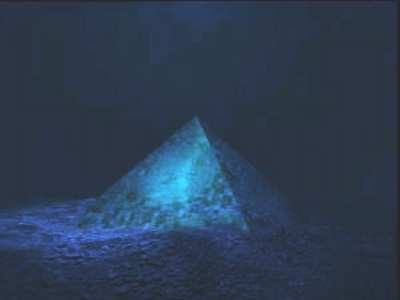 Another giant pyramid topped with what looks like a Crystal was discovered by divers in the Bermuda triangle [see: Pyramid Found In Bermuda Triangle!]

The gigantic structure, is perhaps higher than the great pyramid of Cheops in Egypt and initially identified by a physician in the 1960's, has been independently verified by teams of diving in France and the United States.

A discovery that rewrites the history of the world

Could such discovery change the vision of the humanity of the story? Yes, you could change everything.

Fernandez writes, "that has confirmed that the stones were cut, carved and polished to make them fit and thus form larger structures. In strange inscriptions, some of them similar to Egyptian hieroglyphs, it knows very little, except that they are very abundant and found in almost all parts of the field. Also have featured symbols and drawings whose meaning is unknown." 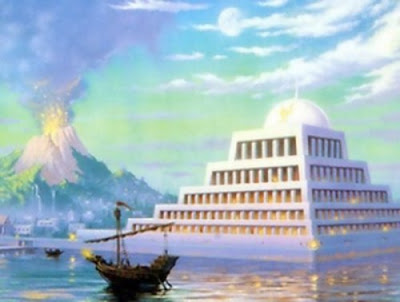 The exploration of Atlantis, called project Exploramar, is expanding to discover more of the mysteries of the mega-city.

Talking to a scientist about the possibility that the ruins are, in fact, Atlantis, FernanEdez reports that the expert responded:

"... in Yucatan today's cultures is possible that still are the Aboriginal people of those places perhaps the Olmecs or some very primitive civilization of Yucatan, the northern part of Central America - originated according to them on an island that sank by a cataclysm." This island called Atlanticu."

It is also suited to stories about the sudden disappearance of the wonderful Atlantis.

Atlanticu. Atlantis. The Aboriginal natives still call it in its history. 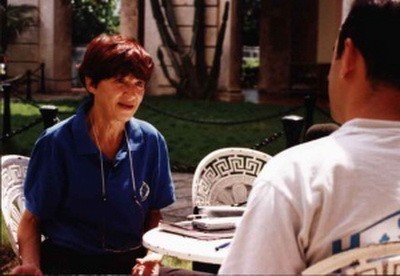 During an interview about the exploration of the mega-city, Fernandez asked the scientist Pauline Zalitzki about the civilization that built it.

"When we publish the first time the news of this discovery the University of Veracruz was interested in our work and the images we had recorded of these structures at the bottom of the sea. In particular the Institute of anthropology of the University invited me to some excavations they were doing about parts and ruins of the Olmec civilization..." 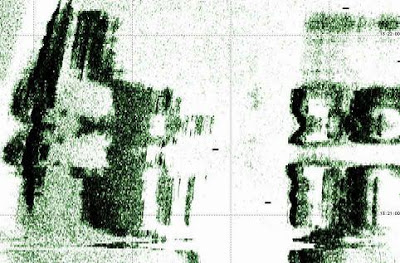 Images of mega-structures on the seabed sonar [image: LMF]

"When they saw these underwater images [they] found similarities and parallels with the ruins found in these excavations the Institute was carried out." 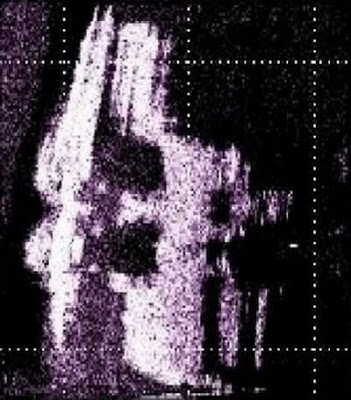 Another image of a mega-structure Atlante [image: LMF]

"The Olmec and other primary native peoples have all a morphology that mark their arrival from the Mainland of East. Does this mean that came from the direction of Cuba, and had to occur in a very large earthquake where their lands sank. The morphologies of these indicates that they belong to three families that were saved. One of these families reached the shores of Veracruz, who are supposed to are the Olmecs. Others came to Central America and traveled to the shores of the Pacific, and these families created the civilization of the Americas as we know it today in day, because they distributed their knowledge." 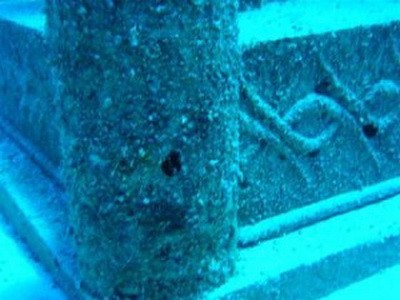 "When these anthropologists saw underwater images of this"City"and looked at some stone monoliths, some symbols and inscriptions they identified it with Olmec motifs. They were very surprised".

The Olmec delegates of the survivors of Atlantis, a great superior culture destroyed by a major flood at the end of the ice age. The world was reformed and was destroyed a super-civilization, remembered for millennia in legends and in a reference to pass by the philosopher Plato.

However the Atlantis was real, he is real: Paul Weinzweig and Pauline Zalitzki scientists have found it.

Translated From This Source

We have 751 guests and no members online