The Hollow Earth - Heaven or Hell? 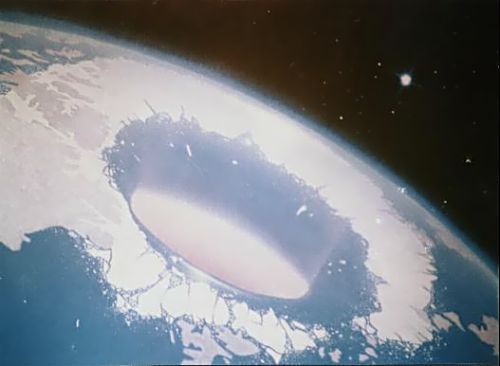 Our common conception is that Heaven is out there somewhere in the sky or in space, while Hell is underneath us, deep underground or at the planet's center. This would be accurate if the planet had a wholly solid interior, but it does not. Our planet is a hollow shell and at its center is a luminous sun or anomaly. It is engineered wisely and economically so that both the outer convex surface and the inner concave surface can be inhabited. This is possible when it is realized that the planet's gravity is in the middle of it's shell, and not its center. Polar openings connect the two surfaces in an unbroken fashion, and two suns, one outer and one inner, illuminate and warm both areas. Air and water flow also circulate unbroken from inner to outer and vice versa with the ice caps acting as a filtering system.

Not only are the inner and outer surfaces of our hollow planet inhabited, but the shell is as well. The Earth's shell, which varies from 400 to 800 miles in thickness, is made up of several layers or stratas, much like an apartment complex, wherein live many civilizations and eco-systems. The shell is also honeycombed throughout with tunnels and cavern systems both natural and man-made. The caverns contain cities or communities, human and non-human alike, and are interlinked by high-speed shuttles or trains which run magnetically through the tunnels, much like our modern subway systems. Many of these transport systems reach both the outer and inner Earth surfaces, where trade and buisness is conducted, but only priveleged or high-level functionaries have access to these ports. 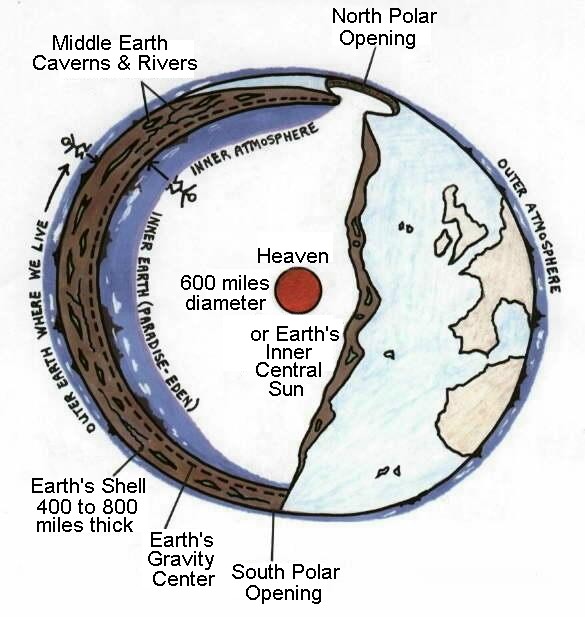 All major outer Earth cities are linked to inner or Middle Earth sub-cities via secret tunnels, ports, shafts, elevators, and other passageways, where dignitaries and officials conduct commerce or exchange imformation. Most of our technology comes from the inner earth. In the last few hundred years, inner earth societies have groomed the outer earth into its present modernized state. The goal is the eventual full integration of the inner and outer earth worlds into one world government or society. Whether this is for good or bad remains to be seen. One of the great challenges confronting us is the safe integration of clean technologies in an otherwise fully organic world. Many believe that technology is a crutch or the work of the devil, and that the human organism has potentials that can outsurpass any technology.

Is the inner earth good or evil? The same question can be asked of outer earth. It appears that the first two to three hundred miles both beneath and above sea level is a region of predominant negativity. For thousands of years now, this outer world of ours has been dominated by war and chaos instigated largely by forces that are anti-human. There are two basic forces or spirits in our universe whose embodiments are reflected in the mammalian and reptillian species, and they have always been at odds with one another. Both have claims to this part of the universe and Earth in particular. In the last great battle between these two forces the reptillian or luciferian forces were defeated and driven underground, where they now await judgement. These fallen angels, who have lost their original human bodies and taken on reptillian ones continue to impede and frustrate humanity despite their restraints. Were they to be fully loosed, humanity would be instantly destroyed. Instead they must use human leaders and technology to do their dirty work.

True Christianity in the first few centuries AD was one of the greatest resistance movements against the satanic or luciferian forces that seek to destroy humanity and make Earth their home. Apollonius of Tyana, also known as "Paul" was the true Jesus or Christ of the New Testament. His works and writings have been largely destroyed or changed by Roman emperor Constantine and his advisors to formulate our present Christianity which invented Jesus and a hellfire and eternal damnation. Christ comes from the word Krishna. The Bible is a rehash of even more ancient manuscripts originating in India and the Orient. Over the centuries, true christianity has also gone underground recruiting special individuals who have overcome sin and death and who will become part of the 144,000 leaders in the new heaven and earth. They are from all races and nations and are now busy battling the dark forces in a struggle to reclaim this planet from the inside out. 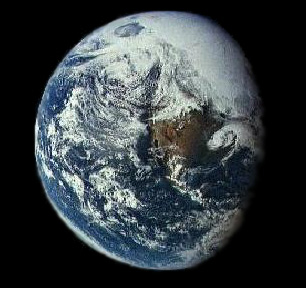 World Wars I and II were the outer manifestartions of the gigantic battle going on inside the planet for its repossession. We are in a lull right now, as both opposing forces regroup for an all out final assault(Armageddon) on one another. According to one American lama in Tibet, the ruler of the Satanic forces, Sanat Kumara, or "King of the World" was deposed from his inner Earth throne in 1948, and his demons with him, so that most of the inner Earth is now under superhuman rule. It is outer earth, or the few hundred miles beneath or above sea level, to where the vanquished demons have fled that remains to be cleaned up. The planet Pluto, discovered in 1930, and representing the dark coming to light, is a heavenly signal or warning that the planet is undergoing an inner and eventually outer cleansing. Our planet and all life on it are dying, but we are also on the verge of being reborn.

A new home or planet will be found for the negative forces that have plagued and polluted our planet for so long, and then finally this planet will come into its own and enjoy a much needed golden age or millennium of rest and peace and abundance.

BIBLICAL VERSES REFERRING THE THE HOLLOW OR INNER EARTH

THE BOOK OF ENOCH

The Book of Enoch, which predates the New Testament and which was excluded from the bible at the Council of Nicaea in 325 AD, is a treasure house of knowledge and wisdom concerning the hollow earth. In section I of the book, chapters 17 to 36, Enoch, beloved scribe of God, is granted the unique privelege of observing and recording the secrets of the inner earth and heaven(central sun). He saw that the inner earth contained both heavenly and hellish regions, and that ANY place can become a heaven or a hell depending on the spirits who inhabit it. While the book was popular and widely read in the first few centuries AD, it was later banned or suppressed by the new counterfeit Christianity, which obviously saw it as too revealing, and counterproductive to its purposes.