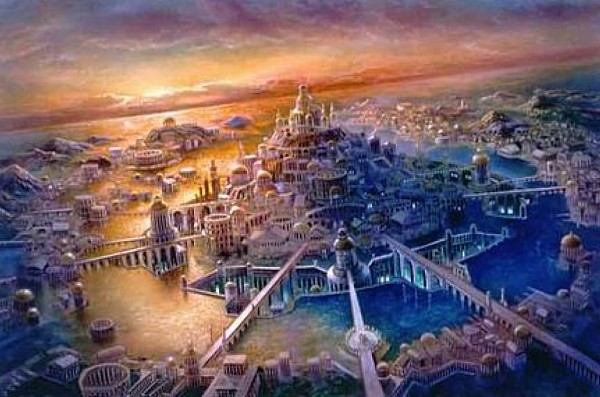 Lets start with a history lesson. Humanity was created around 200,000 years ago as the most advanced physical race in the Universe and traveled along their evolutionary path quite nicely until around 60,000 years ago when marauding dark forces overran this sector of space and began the timeline that still enslaves us.

With dark ETs controlling the airspace and light ETs kept away, the dark began a conquest of Earth and of humanity. Human DNA was highly prized and a dark colony was started on the continent of Atlantis where the Atlantic Ocean now exists. The colonists, humanoids known as Atlantians, practiced genocide of various forms very similar to how the White Man took over the Americas; and also interbred with the indigenous people so humanity is now a mixed race. A technologically advanced human civilization existed on a continent called Lemuria, half way around the world in what is now the Pacific Ocean. The dark Atlantians wanted complete control and the Source based Lemurians resisted resulting in a series of thermo-nuclear wars fought between 25,000 to 30,000 years ago. There were no winners and the stalemate continued.

The wars seriously damaged Earth and Atlantis collapsed around 13,000 years ago, sinking below the waves. The top echelon of Atlantians escaped in space craft but Atlantis was lost. This top echelon, fortified by dark ET supporters, feigned desperation and asked the Lemurians to help them. A high level contingent of Lemurians answered the call and journeyed to the Atlantian’s space craft under diplomatic immunity.

It was a trap. Katelon (my work partner of today) and I were leading members of this Lemurian contingency and our party was soon overpowered, placing us at risk. The Atlantian’s objective was to get us to betray our civilization but we would not. We were subjected to extensive torture and eventually killed. Our souls were captured by dark technology and dark curses that have remained with us all this time. The Atlantians then successfully destroyed Lemuria and it too sank below the waves. North America rose in-between creating the current continental configuration.

That soul capture, using illegal methods (violates Cosmic Law) dogged both of us ever since.

Fast forward to the now. The Universe arranged for Katelon and I to meet and join forces in this current attempt to liberate humanity. We are supported by Source, by human Disclosure Project volunteers, and a number of Light based ET delegations who now occupy Earth’s airspace. (The marauding dark ETs have surrendered to the Light’s agenda and left occupied territory to focus on Light based changes on their home planets.) Great progress has been made toward the objective of ending the current dark timeline by replacing it with a Light based timeline (Disclosure Project) but the Atlantian soul capture and curse continued undetected until the last couple of weeks.

One of the supporting ET groups are Atlantians, from their home planet. They are long standing members of of the Disclosure Project team. A couple of weeks ago, we got information that some of the Atlantians had become double agents. We ousted the transgressors (about half the Atlantian contingent) and they were sent home; their privileges here rescinded.

Unraveling the soul capture and the curse has dominated our agenda ever since. The etheric jail for captured souls was dissolved and various implants and attachments were removed. A few souls who remained involved in this illegal activity were replaced and returned to Source. Pretty intense stuff.

Are we at the bottom of the dark resistance? Time will tell.

Meanwhile, the target remains to hold a disclosure event broadcast around the world initiating full disclosure for all of humanity. This will be augmented by a formal invitation to Light based ETs to interact with humanity, and Light based takeovers of the world’s financial systems, media conglomerates, and the world’s health authority.