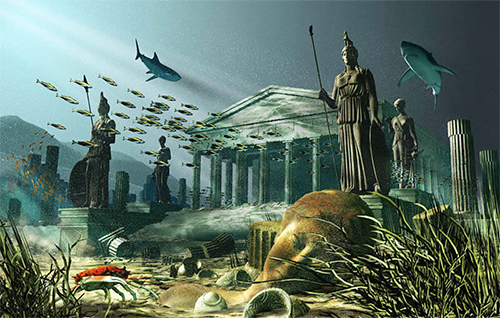 Some say it's in the Caribbean, some say at the South Pole, while others say it never existed at all. But an astonishing recent discovery off the coast of Cuba just might solve the mystery of the great sunken civilization.

The legend of the lost civilization of Atlantis comes to us primarily from an account recorded by Plato, the great Greek philosopher and author, around 370 B.C.E. He described it as a beautiful continent-sized island that existed somewhere to the west of the Mediterranean, by most interpretations. It was a peaceful land, prosperous from its flourishing commerce, highly advanced in knowledge and technology, and powerful in its governmental influence. After many years of prosperity, however, the gods looked unfavorably upon the island nation because of its arrogant rulers and complacent citizenry, and they condemned it. In just one dreadful day and night, Plato tells us, Atlantis was completely destroyed by catastrophic flooding and disappeared beneath the sea.

Plato's description of the exact location of Atlantis is vague at best, giving us only its general direction. People have been searching for it ever since.

The idea that such a marvelous lost world may have once existed - and about which we know so little and have even less evidence - is compelling. People have devoted their lives to studying, researching and hunting for Atlantis. A lucrative cottage industry has grown around the legend, producing countless books, articles, websites and movies - all speculating on the true fate of the doomed land.

Did Atlantis really exist? If so, where was it and can we find evidence of the once-great civilization today? Not surprisingly, there are many theories as to the precise location of Atlantis. Whenever underwater ruins of any kind are found, it seems, someone tries to link them to Atlantis.

Here are some of the more popular theories, plus the latest information on a recent remarkable discovery that just might shed light on the legend of Atlantis:

Many historians and mainstream scholars consider the story of Atlantis just that - a story. This point of view is explained in an article entitled "Atlantis, Again" on N.S. Gill's Ancient/Classical History section of About.com. "Given Plato's concern for good government and an ideal image of Athens of old," writes the article's author, Aulus, "it is very clear that this is a parable regarding the need for virtuous government and rulers. Of the few other ancient mentions of Atlantis, all are but commentaries on Plato's tale... We all would like to think that somewhere, some time there was or is or will be a nice utopia. Unfortunately, that's all Atlantis ever was, a tale of utopia."

The West Indies or Bahamas

The Bahamas is an independent state in the long string of beautiful islands known as the West Indies just east of Florida. This area is favored by many as the last remnants of Atlantis primarily due to a 1932 "reading" by Edgar Cayce, the famous "Sleeping Prophet." In this reading, Cayce said that evidence for Atlantis could be found as far east as the Pyrenees and Morocco and as far west as the Yucatan, in Mexico. The Bahamas, however, might be the best place to look:

There are some protruding portions... that must have at one time or another been a portion of this great continent. The British West Indies, or the Bahamas, are a portion of same that may be seen in the present. If the geological survey would be made in some of these especially, or notably in Bimini and in the Gulf Stream through this vicinity, these may be even yet determined.

One of the most often-cited "proofs" of the accuracy of Cayce's prediction was the discovery in 1969 of enigmatic stone formations beneath the ocean at Bimini in the Bahamas. Although skeptics claim that the geometric, adjoined stone slabs are completely natural formations, believers suspect that the stones were once part of a great Atlantean roadway or temple.

Atlantis and the Bermuda Triangle Crystal relates one incredible story about a discovery made by Dr. Ray Brown in 1970 while scuba diving near the Bari Islands in the Bahamas. Brown claims that he came upon a pyramid-like structure with a smooth, mirror-like stone finish. Swimming inside, he found the interior to be completely free of coral and algae, and was illuminated by some unknown light source. In the center was a sculpture of human hands holding a four-inch crystal sphere, above which was suspended a red gem at the end of a brass rod. Brown says he took the crystal, which allegedly has strange, mystical powers. "People have felt breezes or winds blowing close to it," the article says. "Both cold and warm layers surround it at various distances. Other witnesses have observed phantom lights, heard voices or felt strange tingling sensations surrounding it." Brown's story, of course, has yet to be corroborated or verified.

This relatively recent theory holds that Antarctica is Atlantis. Those who subscribe to this theory say that Antarctica wasn't always the ice-covered land at the bottom of the world, as it is today. The continent was once a tropical land situated on the Earth's equator, but was shifted to the South Pole due to a slippage of the planet's crust. This theory is described in great detail, with photos and maps, at Atlantis and the Earth's Shifting Crust. One of their main pieces of evidence is an alleged ancient Egyptian map of Atlantis, said to be published in a book by a German Jesuit priest in 1665. The map depicts "Atlantis" between the Americas and Africa (look at a globe from the bottom and Antarctica is indeed situated between South America and Africa). More intriguing, however, is the shape of Atlantis in this supposedly ancient map: it corresponds almost exactly to the shape of the land beneath all the ice of Antarctica - a shape that wasn't known until 20th century satellite imaging!

Gene D. Matlock is one researcher who believes we should be conducting the search for Atlantis in the Yucatan region of Mexico. Matlock cites place names as one of the compelling proofs:

He also cites an ancient, spiral-shaped harbor with high banks or dikes lining the channels that once existed near San Lorenzo Tenochtitlán, Mexico. This layout is very much like that described by Plato for Atlantis's great port city.

The Celtic Shelf is the continental shelf surrounding much of England. This area, currently underwater, was actually above water during the last ice age, over 10,000 years ago. It is here, according to a theory by Viatcheslav Koudriavtsev, a Russian researcher in his article, "Atlantis: A New Hypothesis," that artifacts from the lost Atlantis might be found. "Plato's geographical descriptions of Atlantis correlate with sufficient precision with the actual paleogeographic situation at the time he specified: in the Atlantic Ocean," he writes, "outside the Mediterranean Sea, there must have really existed land, where there was a plain adjoining the coast of approximately the same size as described by Plato. The verification of this hypothesis can be effected by organizing an expedition for underwater exploration on the Celtic Shelf, in particular, in the Little Sole Bank area."

This is probably one of the most controversial theories about the location of Atlantis - outer space. Alan Alford makes the case that Atlantis was not an island, continent or any other terrestrial landform, but a planet circling our sun. Alford goes back to Atlantis's Egyptian roots (Plato is said to be retelling the story of Solon, who in turn told the stories that he had heard during his trip to Egypt) and his interpretation of Egyptian legends to include a neighbor planet that blew up in some ancient era. This doomed planet may have been, in fact, the home of the technologically advanced Atlanteans. "This example of Atlantis," Alford writes, "illustrates how the implications of an exploded planet cult in ancient Egypt extend well beyond the boundaries of Egyptology itself, leading to a radical reappraisal of the so-called 'gods,' which came down from heaven to Earth. The identification of these gods (the Anunnaki, the Nephilim, the Builder Gods of Edfu, for example) as meteoric planetary fragments inevitably begs the question of whether God, the son of God and the angels of God are also echoes of this ancient and profound inter-planetary creation cult."

Off the Coast of Cuba

In May, 2001, an astounding discovery was made off the coast of Cuba. An ocean engineer named Paulina Zelitsky, while conducting ocean sonar research for Advanced Digital Communications, imaged something she could hardly believe. She told a reporter for Reuters: ""We are the first people ever to see the bottom of Cuban waters over 50 meters. It's so exciting. We are discovering... even possibly a sunken city built in the pre-classic period and populated by an advanced civilization similar to the early Teotihuacan culture of Yucatan."

Incredibly, the sunken city lies on the floor of the ocean at a depth of about 2,200 feet! It must therefore be a quite ancient civilization indeed!

Zelitsky said that the sonar revealed a "huge land plateau with clear images of what appears to be urban development partly covered by sand. From above, the shapes resemble pyramids, roads and buildings."

This is an incredible and potentially history-altering discovery. And it was made not by some lone diver or amateur organization. This find was made by scientists. And today no less an organization than the National Geographic Society has become involved and is investigating the site. It is not known how long the investigation will take or when National Geographic will release its findings. If the sonar images are accurate, however, we will at least have evidence of some lost, unknown culture. On the most fantastic level, we may finally have found Atlantis.

We have 741 guests and no members online