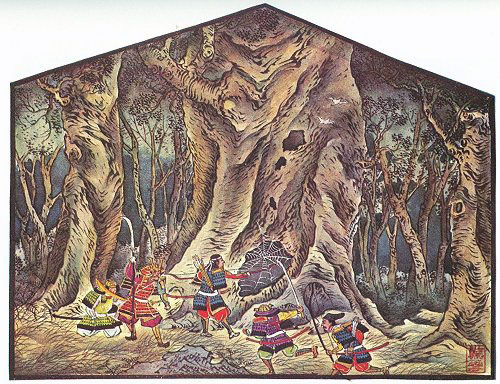 OF Yoritomo Murray says that 'he lived from 1147 to 1199. He was the founder of the Shogunate--the first Japanese Mayor of the Palace, if one may so phrase it. A scion of the great house of Minamoto, as shrewd and ambitious as he was unscrupulous and inhuman, he was left an orphan at an early age, and barely escaped death as a lad at the hands of Kiyomori, the then all-powerful minister who belonged to the rival house of Taira.'

In this excellently-concentrated epitome of Yoritomo's fifty-two years of life, it will readily be seen that he must have had innumerable adventures. Fighting went on throughout his career; yet oddly enough, in spite of all this, he died comfortably in bed.

In the earlier half of Yoritomo's time he was once severely defeated at a battle against Oba Kage-chika in the Ishibashi mountains, in the province of Izu. So bad had been his defeat that Yoritomo, with six of his most faithful followers, to use vulgar language, made a bolt of it. They ran, not over-boldly, but to save their skins, and in their haste to escape Oba Kage-chika's men they took, like hunted hares, to a large forest, hoping there to escape by lying concealed. After they had pushed their way into the thickest and heaviest part of the forest, they came to an enormous hi no ki tree, partly rotten, and containing a hollow which was large enough to hide them all. Yoritomo and his six followers eagerly sought refuge within the tree, for in their state of tiredness they could not long hope to escape the large and active forces of Oba Kage-chika, which were following up their victory by hunting out and cutting off all those who had fled. When he reached the edge of the forest, Oba Kage-chika sent his cousin Oba Kagetoki to search for Yoritomo, saying: 'Go, my cousin, and bring in our enemy Yoritomo. It is the opportunity of your life, for sure it is that he must be in this forest. I myself will endeavour, as our men come up, to place them so as to surround the forest.' Oba Kagetoki was not pleased with his mission, for at one time he had known and been friendly with Yoritomo. However, he bowed low to his cousin and went off. Half an hour after starting Oba Kagetoki came to the enormous tree, and found his old friend Yoritomo and his six faithful attendants. His heart softened, and, instead of carrying out his duty, he returned to Oba Kage-chika, saying that he had been unable to find the enemy, and that in his opinion Yoritomo had escaped from the wood.

Oba Kage-chika was very angry, and openly said that he did not believe his cousin--that to escape from the wood was impossible in such a short time.

'Come!' said he. 'Follow me, some fifteen or twenty of you; and you, my cousin, lead the way and show us where you went, and play fair, or you shall suffer for it!'

Thus bid, Kagetoki led the way, carefully avoiding the big tree, for he was determined to save the life of Yoritomo if he could. By some misfortune, however, he chose an abominably bad path, and Kage-chika, having on a particularly heavy suit of armour, cried out, 'Enough of your leading! Let us stick to the road by which we started. It is more likely to be the one which our fugitives took. In any case, this is no road at all where you lead us, and with heavy armour on it is impossible.'

Thus it was that in due time they reached the huge tree. Kagetoki was much afraid that his cousin would go into the hollow and find Yoritomo, and set to think how he could save him.

Kage-chika was about to enter the hollow tree when a bright idea occurred to Kagetoki.

'Hold!' said he. 'It is no use wasting time by going in there. Can't you see that there is a spider's web right across the entrance? It would have been quite impossible for any one to get inside without breaking it.

Kage-chika was half-inclined to agree that his cousin was right; but, being still a little suspicious about him, he put in his bow to feel what was inside. Just as his bow was about to be thrust against Yoritomo's heavy armour (which would naturally have revealed his presence), two beautiful white doves flew out of the top of the hole.

You are right, cousin,' said Kage-chika, laughing, when he saw the doves: 'I am wasting time here, for no one can be in this tree with wild doves in it, besides the entrance being closed by a cobweb.'

Thus it was that Yoritomo's life was saved by a spider and two doves. When he became Shogun in later years, and fixed upon Kamakura as his place of residence and as the seat of government, two shrines were built in the temple of Tsuru-ga-oka, which itself is dedicated to Hachiman, the God of War. One is dedicated to the Emperor Nintoku, son of Ojin, the God of War, and the other to Yoritomo, called Shirahata Jinja. The shrines were erected to show Yoritomo's gratitude to the God of War, for doves are known in Japan as the messengers of war, not of peace.

NOTE.--I think that the shrine called by Murray 'Shirahata,' which means White Flag, is really 'Shiro hato,' the white doves. The following is from Murray:--

The Temple of Hachiman, the God of War, dating from the end of the twelfth century, stands in a commanding position on a hill called Tsuru-ga-oka, and is approached by a stately avenue of pine trees leading up the whole way from the seashore. Though both avenue and temple have suffered from the ravages of time, enough still remains to remind one of the ancient glories of the place. Three stone torii lead up to the temple, which stands at the head of a broad flight of stone steps. Notice the magnificent icho tree, nearly 20 feet in circumference, and said to be over a thousand years old, and the flowering trees scattered about the grounds.

Before ascending the flight of steps, the minor shrines to the rear deserve notice. The nearer one, painted red and called Wakamiya, is dedicated to the Emperor Nintoku, son of the God of War. The farther one, renovated in 1890, is called Shirahata Jinja, and dedicated to Yoritomo. The style and structure are somewhat unusual, black and gold being the only colours employed, and iron being the material of the four main pillars. The interior holds a small wooden image of Yoritomo.

A side path leads up hence to the main temple, which is enclosed in a square colonnade painted red. The temple, which was re-erected in 1828, after having been destroyed by fire seven years previously, is in the Ryobu Shinto style, with red pillars, beams, and rafters, and is decorated with small painted carvings, chiefly of birds and animals. In the colonnade are several religious palanquins (mikoshi) used on the occasion of the semi-annual festivals (April 15 and December 15), a wooden image of Sumiyoshi by Unkei, and a few relics of Yoritomo. Most of the relics once preserved in the temple have been removed to the residence of the Chief Priest (Hakozaki Oyatsu-kwan), and are only exhibited at festival times.

Immediately behind the temple of Hachiman is a small hill called Shirabata-yama, whence Yoritomo is said to have often admired the prospect. The base of the hill is enclosed and laid out as a garden.

We have 752 guests and no members online